On the first day of his administration, President Biden issued an executive order saying student-athletes should compete under the sex they identify as.

His action spurred a tug of war, pitting those who oppose allowing transgender women to compete in women’s sports against those who support it.

Some of the nation’s largest and oldest women’s rights groups were quick to establish which side of the line they fall on, declaring that transwomen rights are women’s rights and drawing questions about whether they are backing what some say is an uneven playing field.

“As courts and scientists overwhelmingly have stated, transgender girls and women are girls and women,” the National Organization for Women (NOW) said in a statement following the House’s passing of the Equality Act. “Unfortunately, transgender girls’ and women’s participation in school sports consistent with their gender identity has become a cudgel used to attack the [Equality] Act.” 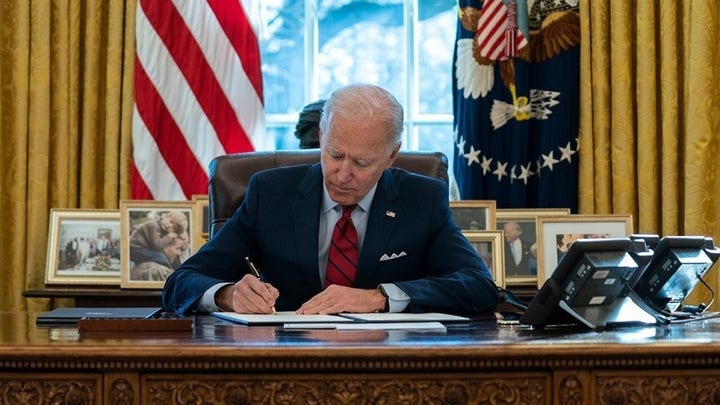 The Equality Act would ban all forms of discrimination based on sexual orientation and gender identity. But while the measure passed the House on near party lines with three Republicans joining Democrats to support the bill, opponents argue that it could limit female opportunities in the sporting arena.

“All women should be concerned about the disastrous effect that the so-called ‘Equality Act’ will have on women’s rights, privacy, and athletic opportunities. It would deny female athletes fair competition in sports, ignore women’s unique health needs, and force vulnerable girls to share intimate spaces with men who identify as female,” Christiana Holcomb, legal counsel for Alliance Defending Freedom, told Fox News.

Holcomb first became versed in the challenges facing transgender rights and women’s rights in February 2020, when three high school female athletes sued the state of Connecticut after being required to compete against two transgender sprinters.

The suit alleges the state’s policy on permitting athletes to compete under their chosen gender identity has deprived female athlete’s state titles and competitive opportunities.

The Women’s Sports Policy Working Group — an association launched by former female athletes and Olympians — found that due to the state’s inclusion policies, cisgender females were excluded from “235 opportunities in high-level competition” over the last three and a half years in Connecticut.

“Women have fought long and hard for equal opportunities, which Title IX was intended to protect,” Holcomb said, explaining that the Equality Act would make Title IX protections for females irrelevant. “All women should be concerned, and so should groups that seek to advance women’s rights.”

Nearly 50 years since Title IX was passed as part of the 1972 Education Amendment, prohibiting sex-based discrimination in any school, the measure has become pivotal in the debate on ensuring women and transgender athletes do not face discrimination.

States have varied in their interpretation of the law, with some holding that barring discrimination against women and girls based on sex does not apply to transgender females. Three states this year have banned transgender women and girls from participating in sports, others have such measures under consideration.

Some women’s groups, including NOW, the largest women’s organization in the U.S., hold that the Equality Act is not an attempt to sidestep Title IX because the earlier measure already applies to transgenders.

NOW did not respond to Fox News’ questions regarding Title IX implications, but in a March 17 statement the group argued, “The Equality Act does not amend Title IX and its protections for women’s and girls’ athletics and would simply codify existing protections against discrimination based on sexual orientation and gender identity.”

Other women’s groups, like the National Women’s Law Center, said their support for transgender women and girls is “inseparable” from their “commitment to fairness and equality” in female sports.

But not all women agree that transwomen’s rights are indistinguishable from women’s rights, including the Women’s Sports Policy Working Group (WSPWG) – a bipartisan group of former female elite athletes and sports policy advocates.

“They won’t acknowledge publicly that they’ve abandoned their traditional commitment to sex equality in competitive sport,” said WSPWG member Doriane Coleman, referring to women’s rights groups. “Instead, they say things like, ‘trans girls are girls, period’ and ‘let them play’ which are designed to suggest that their new commitments do no harm. But of course, they’re obfuscating.

“The ‘period’ in ‘trans girls are girls, period’ codes for the proposition that we’re no longer allowed to make even relevant distinctions on the basis of sex,” continued Coleman, a law professor at Duke University School of Law with a long history of working in sports policy. “‘Let them play’ is a riff on the elementary school standard ‘everyone can play,’ which is exactly right in that context and others where participation is the goal, but exactly wrong in competitive sport, where it’s clearly category-defeating to require females to compete head-to-head against anyone with unmitigated male sex-linked performance advantages,” she explained.

“It’s also category defeating to open up girls’ sport as they propose, to both males and females, some of whom identify as girls, some as boys, some as nonbinary or gender fluid, and to require sports policymakers to ignore that the transgender athletes may or may not be using testosterone and estrogen,” Coleman explained. “The grouping that results is meaningless since it’s no longer based on sex, hormone status, or even gender identity.  On the eve of the 50th anniversary of Title IX, they’re proposing to dismantle the scaffolding that supports the category.”

The WSPWG has proposed a resolution that would amend the Equality Act by carving out language to protect Title IX while also allowing transgender athlete participation. The measure has suggested lawmakers help educational institutions by establishing mathematically established handicaps, similar to directives used in golf.

But addressing physical advantages that transwomen or girls have over cisgender females has been flatly rejected by some civil rights groups.

The American Civil Liberties Union, which in the 1960s declared that women’s rights were “its top priority,” did not return Fox New’s request for comment, but in advocating for transgender rights it has categorically denied that transwomen have any physical advantages over cisgender women, whether or not they have taken hormone therapy.

“The truth is, transgender women and girls have been competing in sports at all levels for years, and there is no research supporting the claim that they maintain a competitive advantage,” the ACLU wrote in a 2019 blog post.