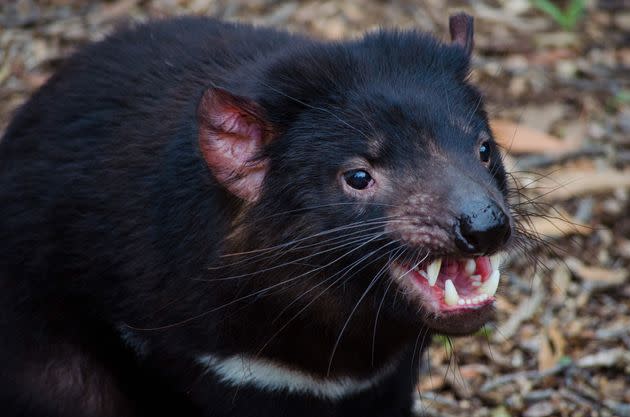 A close-up of a Tasmanian devil.

A woman in Australia got quite the “wild” surprise after mixing up her golden retriever’s faux Tasmanian devil plush toy with an actual real live devil.

On Wednesday evening, inside her home in Hobart, Australia, on the island state of Tasmania, Kirsten Lynch went to reach for what she thought was her pup’s trinket when it suddenly raced away.

“I went to reach for it, the devil shot underneath the couch,” she told The Guardian.

The Tasmanian devil is the world’s largest carnivorous marsupial, according to National Geographic. It can grow to around the size of a large house cat.

Utterly shocked at her discovery, Lynch let out a scream that woke up her family who rushed to her to see what caused the uproar.

To get rid of the furry intruder, Lynch’s husband carefully escorted the Tasmanian devil — who’s known to fly into a rage when threatened by a predator — out of their home using a broom.

Meanwhile, Lynch and her children gathered atop the kitchen table with bated breath as he shooed out the creature.

“We were concerned that if she or he was cornered and scared, they would bite someone,” Lynch told the outlet. “I got the fright of my life. But to be honest, I think the poor thing was more terrified of us.”

The Guardian also shared a clip taken by Lynch of the wild animal rustling around the home and scurrying underneath tables and chairs in their dining area.

The young devil did not appear hurt, according to Lynch.

As for how the devil wound up in their home, the pet owner said that she believes the animal made its way into the house ― which is located beside undeveloped bushland ― by following their family’s new puppy, Gecko, inside after the pet went outdoors for a bathroom break.

“The devil [likely] got through the fence behind Gecko and walked in through the door that we leave open for her as she’s still potty training,” Lynch said.