Winston Churchill’s granddaughter Edwina Sandys penned a scathing op-ed where she reveals she voted for Joe Biden blasts Trump for his ‘lies’ and comparison’s to Churchill.

Sandys, an artist and sculptor, noted that her grandfather steeled the British public for a long and difficult war with inspiring lines like ‘I have nothing to offer but blood, toil, tears and sweat.’

She contrasted this with Trump’s repeated claims that the coronavirus will ‘go away.’ Trump in recent days has continued to say the U.S. is ‘turning the corner,’ even as the U.S. hit 100,000 new infections catalogued in a single day. 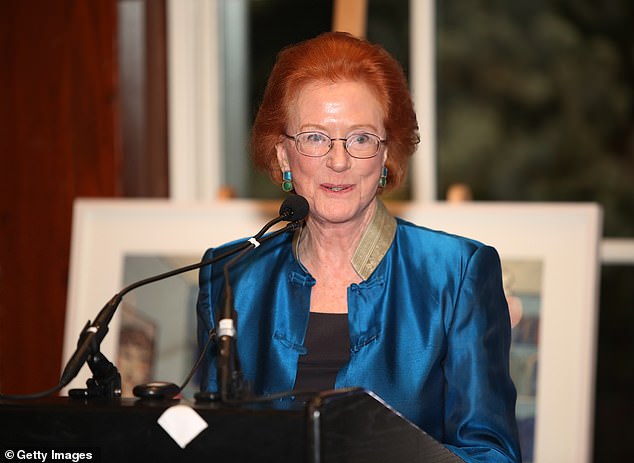 ‘My grandfather did not mince words about the Nazi threat — or say something like, ‘Hitler will be gone– disappear – like a miracle!’ she writes in USA Today.

‘He trusted people with the truth, even when difficult. No! Winston Churchill did not promise the British people a rose garden,’ she adds.

Sandys, a U.S. citizen, writes that she was brought up as a Conservative, and affiliates herself with the Lincoln Project, a group of GOP consultants who has been savaging Trump with online ads.

‘I rarely wade into the political waters, but this year, at this moment, I am joining Republicans and Independents for Biden, an affiliate of the Lincoln Project,’ she explains.

‘I have just voted for Joe Biden. Some of my friends may never speak to me again; others will applaud. Please, for the sake of our country, free yourselves and vote your conscience,’ she advises.

‘Joe Biden is a decent man. He is a man in full, who has known sadness and joy. I believe he will turn the page of history and work with the whole country to make America great again,’ she says of the man she voted for.

She points to Churchill’s role not just as a national leader, but as an important force in strategizing with U.S. presidents to shape the world order.

‘Many of my grandfather’s finest hours were crucial moments in the war, working with Democratic presidents, both Franklin Roosevelt and Harry Truman. Trump has broken many international alliances, which will take time and diplomacy to heal and rebuild,’ she says.

‘Trump has become a laughingstock in Europe and Canada,’ she writes, referencing the Trump baby balloon that hounded the president on his trips to Britain.

Her father Duncan Sandys was a minister in Churchill’s wartime government.

Trump invoked Churchill after journalist Bob Woodward revealed tapes of him saying he played down the virus because he didn’t want people to panic.

‘When Hitler was bombing London, Churchill, great leader, would oftentimes go to a roof in London and speak. He always spoke with confidence. He said we have to show calmness. Nah, we did it the right way,’ Trump said in September.

While Trump did sometimes go on rooftops to view the Blitz, he didn’t speak from the rooftops.