Why IS garden snobbery in full bloom? Outrageously, the common geranium has been declared… well, just that. Now an outraged expert takes his secateurs to the perfumed elitists

Darling, how simply frightful. The common geranium is making a comeback. It will lower the tone dreadfully.

Snobbery is in full bloom across Britain’s gardens this month, as a campaign by growers to rehabilitate one of the country’s prettiest flowers is met with resistance from self-appointed guardians of horticultural taste.

Geraniums (or, to give them their proper name, pelargoniums) have long been regarded as ‘non-U’— symbols of the lower-class flowerbed, unsuitable for the dinner party set. They have acquired a scathing nickname: ‘the poor man’s rose’.

It’s a snobbery so pervasive that you’re unlikely to see them used by fashionable designers. One critic at the weekend sneered that the geranium’s place was ‘in a pot on Nan’s patio’. 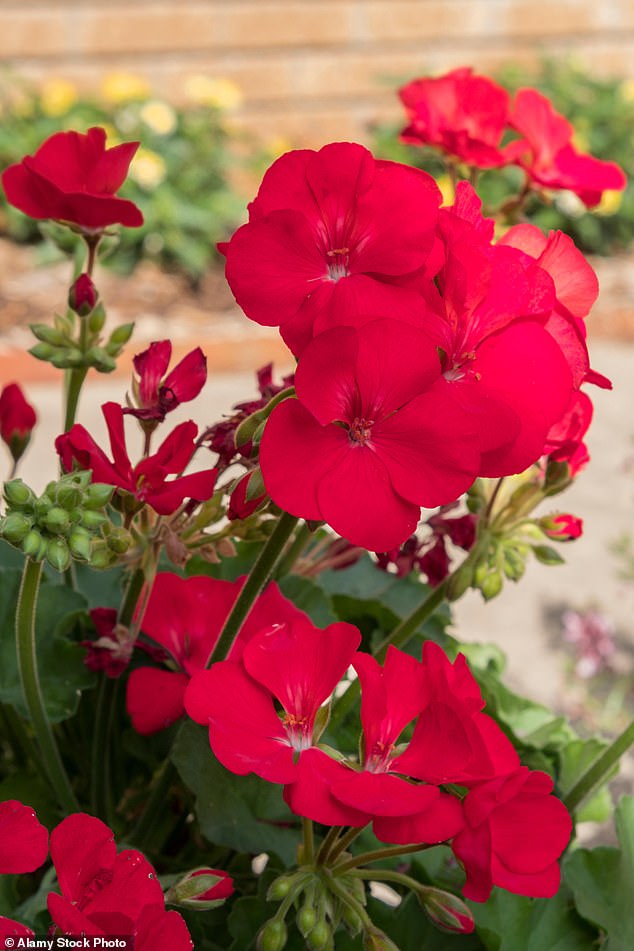 Snobbery is in full bloom across Britain’s gardens this month, as a campaign by growers to rehabilitate one of the country’s prettiest flowers is met with resistance from self-appointed guardians of horticultural taste

Society arbiter Nicky Haslam, who publishes an annual list of things he regards with a shudder as ‘vulgar’, recently said of these vivid blooms: ‘They’re all right in Austria or on Capri, but not in the gardens of England.’

I think it’s sheer nonsense, and I’ll have no truck with stuck-up gardeners.

The five that are posh

Orchids are, of course, the ultimate in posh plants, but there are many other flowers calculated to make your garden socially upwardly mobile.

Take the glorious Gardenia (above), whose delicately petalled blooms are an adornment to any flower bed.

Then there are the likes of delphiniums (left) and euphorbias, both supremely elegant in very different ways.

And finally, David Austin roses. They may be a garden-centre favourite but they look sufficiently old-fashioned to satisfy the snobs — and who can resist their fragrance?

I have always believed that providing it is not either illegal, or an affront to the next-door neighbours, you should grow whatever you like — and never mind what other people say. If it gives you pleasure, a garden has fulfilled its objective. That’s what a garden is for.

But there’s a small group of plants that engender extraordinary snobbery. Pelargoniums are one. Dahlias are another. Fuchsias, begonias, lupins and rhododendrons attract scathing epithets, too.

The same is true, among houseplants, of cacti. No one of any ‘distinction’ will have them. Orchids and gardenias, on the other hand, are regarded as a mark of refinement.

I suspect that snobs bridle at big or brightly coloured flowers. They seem to regard them as artificial or inauthentic, which is totally ridiculous: 95 per cent of plants in our gardens have been genetically engineered by breeders.

Rejecting the brightest and brashest says far more about the limitations of many garden designers than it does about the plants. The challenge is to incorporate contrasting colours, shapes and sizes — that is the hallmark of a clever gardener.

If you can’t find ingenious ways to blend plants of every sort into your design, the failure is yours, not the plants’. Good designers will view gaudy geraniums as a challenge to their talents.

And they will have plenty of opportunity this year, because the Royal Horticultural Society (RHS) is backing a social media campaign to rehabilitate the plant.

Heather Godard-Key, an expert grower who manages Fibrex Nurseries near Stratford- upon-Avon, which is home to the National Collection of Pelargoniums, wants to see the flowers regain popularity with younger gardeners. 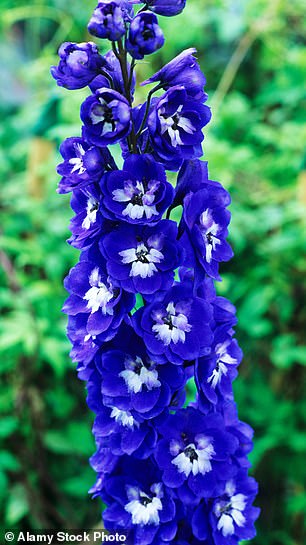 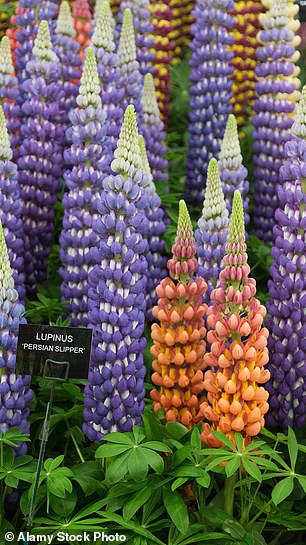 Geraniums (or, to give them their proper name, pelargoniums) have long been regarded as ‘non-U’— symbols of the lower-class flowerbed, unsuitable for the dinner party set

‘A lot of people just don’t know about the extensive variety of pelargoniums — more than 1,400 of them,’ she says. ‘There are so many varieties and hybrids: different flowers, shapes and colours.

‘There are scented leaf plants with the smell of lemon, orange, lavender or cinnamon, and there are scented flowering plants that have a fruity, pineappley smell that wafts in the evening. I even make cakes with pelargoniums to flavour the sponge.’

I applaud her enthusiasm, but I think it misses the point to suggest that the subtler varieties are somehow more acceptable. The meaty flowers in fire-engine red or neon pink are just as lovely.

… And those that not

The geranium, which comes in 422 species of annual, biennial and perennial plants, is certainly common!

And for years it came to be seen as a little too gaudy for the more snooty members of the gardening fraternity, who dubbed it, rather unkindly, ‘the poor man’s rose’. Lupins (below), dahlias and fuchsias have also spent years in the metaphorical shade.

But spare a thought for the rhododendron-growers, whose flower heads were once dismissed by Vita Sackville-West, the chatelaine of Sissinghurst Castle, as just like ‘fat stockbrokers, whom we do not want to have to dinner’.

Sadly, snobbery in the garden is nothing new. One of its worst offenders was the aristocratic Vita Sackville-West, who with her husband Harold Nicolson created the superb gardens at Sissinghurst Castle in Kent. Vita refused to have plants she regarded as ‘bedint’ or middle-class. Azaleas, for example, were excluded as being too redolent of Ascot and Sunningdale, home turf of the bourgeoisie and the nouveaux riches.

Her son Nigel said that she avoided rows of geraniums ‘for the same reason that writers try to avoid cliches. Their familiarity breeds tedium’.

Personally, I think it’s a cop-out to balk at bright flowers just because they are sometimes overwhelming. The trick is to blend them in, not weed them out.

Vita is widely admired for her ‘white garden’ at Sissinghurst, but it could be argued that combining different types of white plant is easily done. They’re bound to work well together.

Her especial contempt was reserved for rhododendrons, which she said resembled ‘fat stockbrokers, whom we do not want to have to dinner’.

It is true that rhododendrons have a bad name, because of the purple rhododendron ponticum, introduced from Spain, which has become a seriously invasive weed in wild places. Still, they can be wonderful when carefully controlled, and I have a number in containers in my own garden.

The great gardener Christopher Lloyd condemned them as a Surrey suburban cliche. Well, if he didn’t like them, that was his problem. We all have our quirky dislikes. Personally, I can’t stand the shrub called Garrya elliptica: it’s such a miserable thing, with those dreary green catkins in February. Other people love them, so it’s my loss.

But I believe Christopher did real and lasting harm in the early 1990s when he suddenly turned against roses, digging up his rose bed at his show garden in Great Dixter in Sussex.

He started a trend against the vibrancy and sumptuous beauty of roses, which no amount of fashionably muted hellebores or lavenders could ever replace. 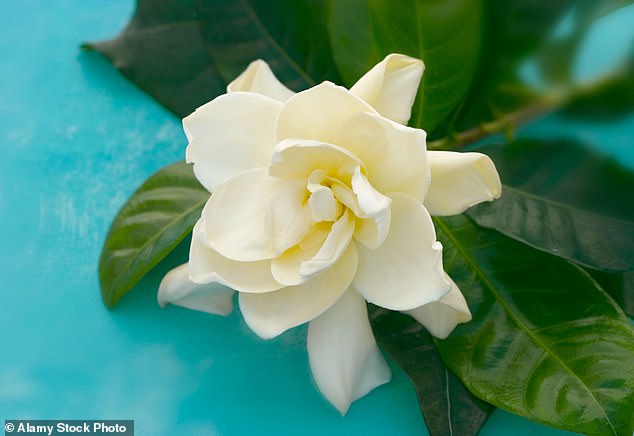 Roses have recovered their popularity, but even now there’s a snooty feeling that only a rose from David Austin’s firm is good enough — one of those marvellously engineered varieties that blooms repeatedly throughout the year and looks old-fashioned.

Christopher Lloyd’s declaration that the common tea rose ‘makes a very spotty effect’ continues to inhibit people from planting them, and I think that’s a tragedy.

If roses are too garish, what chance do African and French marigolds have, in all their brilliant orange glory?

I have two pots of marigolds in my knot garden, among the greens of the yew and the box, and they are stunning. I also have several cacti in my greenhouse, and the sight of them gives me quiet pleasure. It’s true that they require very little care or skill, but that’s no reason to dismiss them.

These things go in cycles, of course. The Victorians adored big, bright plants. Then came the Arts-and-Crafts era, which favoured wild flowers, and after that the wartime drive for vegetables. 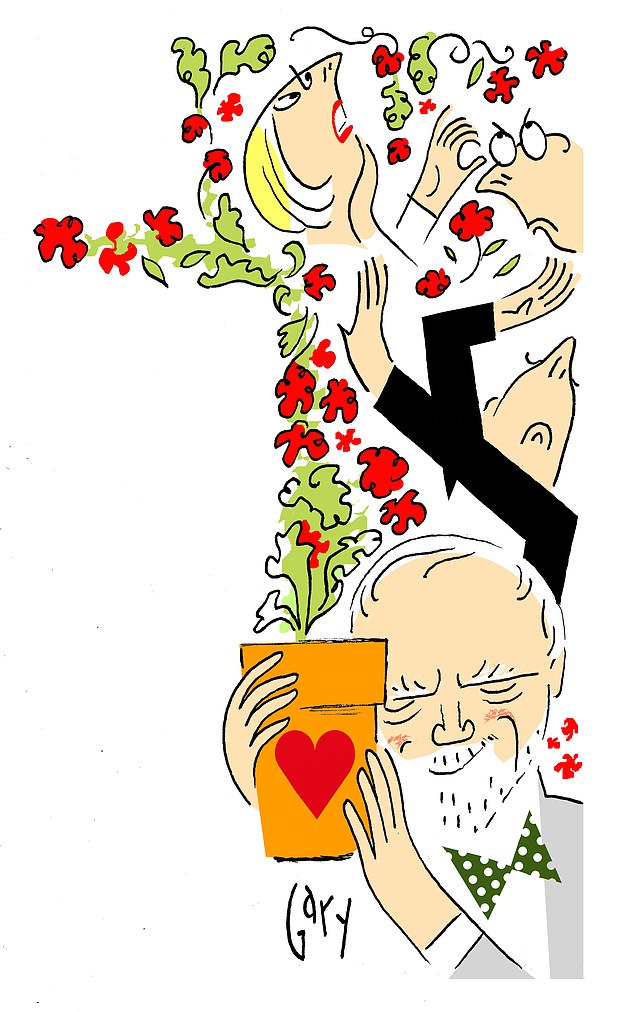 By the 1950s, gardeners were ready for brilliant colours again and the cheerful geranium was to the fore.

Today, it is seen as old-fashioned, but I hope the new campaign will change that. Started in 1958, the National Collection is thought to be the largest assemblage of plants from one genus anywhere in the world, and it will be going on show at RHS sites around the country.There’s one gardener who will take no notice of these vagaries. The Queen is a great fan of geraniums.

The late Ashley Stephenson, superintendent of the royal parks who died this year aged 93, once told me that Her Majesty insisted on seeing scarlet geraniums on the island at the front of Buckingham Palace.

The variety had to be the bright red and aptly named ‘Grenadier’ geranium. Nothing else would do. And as millions will attest, they do make a magnificent display.

I’ll say it again: plant what you like and please yourself. But if you really must be a snob, follow the royal example and plant geraniums.