A group of white nationalists marched on an LGBTQ event in Detroit on Saturday, demonstrating Nazi salutes and carrying weapons.

Members of the National Socialist Movement (NSM) caused outrage at the event meant to celebrate gay pride, and one member was photographed appearing to urinate on an Israeli flag.

The Motor City Pride is described on its Facebook event page as the largest pride month event in Michigan, with 40,000 people marked as attending. On Saturday, some individuals tried unsuccessfully to stop the NSM group from entering the streets, which were blocked off by police and lined with rainbow flags. 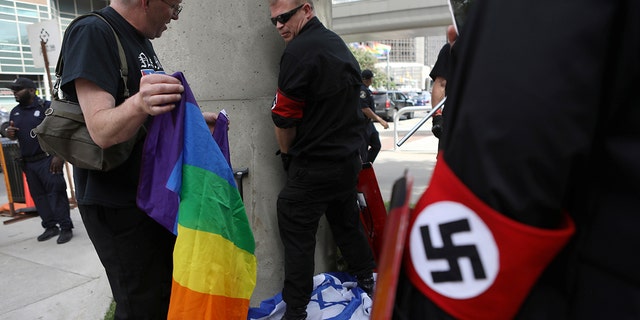 A group of white nationalists marched on an LGBTQ event in Detroit on Saturday, demonstrating Nazi salutes and carrying weapons<br data-cke-eol="1">
(REUTERS/Jim Urquhart)

NSM members were photographed tearing apart one of the flags, which represent gay pride.

The group is considered one of the largest neo-Nazi organizations in the United States and is known for "theatrical and provocative protests," according to the Southern Poverty Law Center.

A prominent former NSM member, J.T. Ready, said in a blog post in 2008 that he felt permitted to protest because minority groups have done the same for their "sick" beliefs. 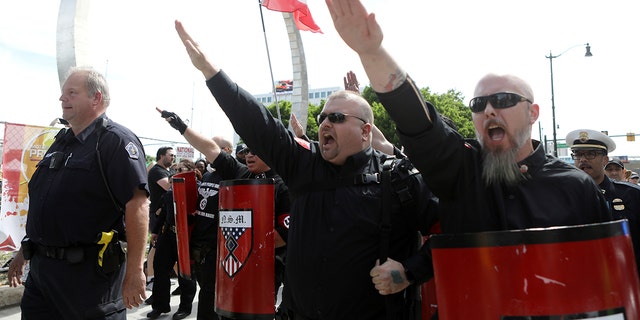 “I do not see the n—–s, homosexuals, Mexicans, Jews, or even child molesters ashamed or afraid to speak their minds and rally, march, post, and be activists for their sick cause," he wrote. "Too many brave men and women died to give me the chance to fight now. I will honor their blood and fight for soil.”

Ready killed himself in 2015 after fatally shooting his girlfriend Lisa, her daughter Amber and Amber's boyfriend Jim, and Amber's 18-month-old daughter Lilly.

No one was injured Saturday during NSM's demonstration at Motor City Pride, but seven people were hospitalized during a pride parade in Washington, D.C., after crowds panicked after hearing what was believed to be gunshots.

The city's mayor later tweeted that there was no active shooter in the area.