Fauci has been sidelined as he sounds alarms about the virus, while Trump is focused on pushing an economic rebound. 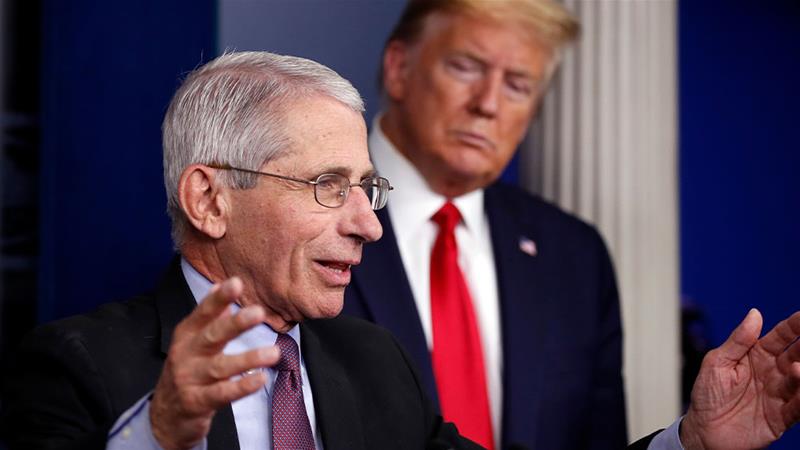 With virus cases spiking in the United States and the death toll mounting, the nation’s top infectious diseases expert Dr Anthony Fauci is warning the US needs to “step back” from reopening even as Trump White House aides have begun working to undercut his credibility.

“Here it is, it has happened, your worst nightmare, the perfect storm,” Fauci said in a video conference with the dean of Stanford’s medical school on Monday in which Fauci called for a “step back” in US reopenings.

“This is a really serious problem. It is truly historic. We haven’t even begun to see the end of it yet. Until you get it completely under control it is still going to be a threat,” Fauci said.

The US has become a cautionary tale across the globe, with once-falling cases now spiralling and the American death toll surpassing 136,000 among more than three million infected. President Donald Trump is pushing to get the economy moving and argues the severity of the pandemic is being overstated by critics to damage his re-election chances in November.

Fauci has been increasingly sidelined by the White House as he sounds alarms about the virus, an unwelcome message at a time when Trump is focused on pushing an economic rebound. At the same time, the president and top White House aides now are ramping up attacks against Fauci.

On Monday, Trump retweeted a post by a former television game show host, Chuck Woolery, claiming that “Everyone is lying” about COVID-19. Woolery’s tweet attacked not just the media and Democrats but the Centers for Disease Control and Prevention and most doctors.

That supportive message was not echoed by Peter Navarro, a top White House trade adviser who has been working on the coronavirus effort.

In an email, Navarro continued to criticise Fauci to The Associated Press news agency on Monday, saying the doctor has “a good bedside manner with the public but he has been wrong about everything I have ever interacted with him on”. That includes, he said, downplaying the early risk of the virus and expressing scepticism over the use of hydroxychloroquine, which Navarro has aggressively championed despite contradictory evidence on its efficacy and safety.

The president’s team has made clear they have no intention of trying to remove Fauci, knowing the uproar that would create. Instead, they appear content to diminish his reach while encouraging Republican legislators, administration officials and other allies to highlight Fauci’s missteps.

It is part of a White House effort to “counterpunch” on behalf of Trump, who believes all slights must have a forceful response, said one official, who, like others, spoke to AP news agency on condition of anonymity to describe internal White House thinking.

Meanwhile, supporters are flocking to Fauci’s defence. The Association of American Medical Colleges president issued a statement saying the organisation was “extremely concerned and alarmed by efforts” to discredit Fauci.

Fauci, who has not appeared at recent White House task force briefings and has been largely absent from US television, told the Financial Times last week that he last saw Trump in person at the White House on June 2 and had not briefed him in at least two months.

He blamed the Trump administration’s failure to approve many of his media requests on the fact that he has refused to toe the line for reopening. 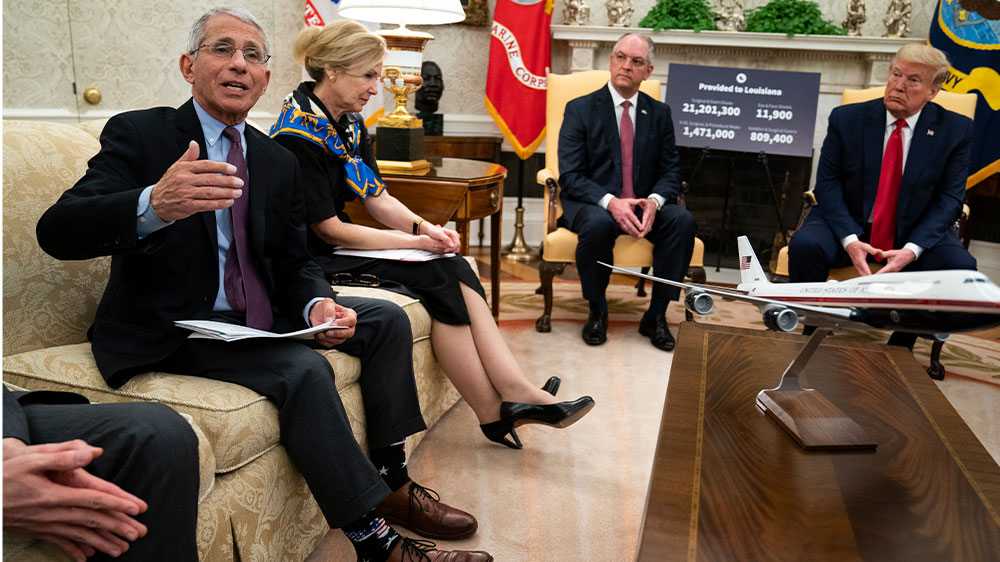 “I have a reputation, as you probably have figured out, of speaking the truth at all times and not sugar-coating things. And that may be one of the reasons why I haven’t been on television very much lately,” Fauci said.

In the early days of the virus, as Trump bristled at the attention Fauci was receiving, the White House took control of the doctor’s media schedule, significantly cutting his TV appearances though he continued to find alternative outlets – including podcasts and social media.

“The president’s disgusting attempt to pass the buck by blaming the top infectious disease expert in the country – whose advice he repeatedly ignored and Joe Biden consistently implored him to take – is yet another horrible and revealing failure of leadership as the tragic death toll continues to needlessly grow,” said Andrew Bates, a spokesman for Democrat presidential candidate Joe Biden.

“We cannot allow Donald Trump to silence Dr Fauci or any other government scientists,” said Senator Ed Markey, a Democrat who introduced legislation in April to protect Fauci and other leaders of the National Institutes of Health from being fired for political reasons.