Washington: The White House is insisting that President Joe Biden, rather than the Taliban, will decide whether American troops withdraw from Afghanistan by the end of the month as planned or stay longer to continue the evacuation mission.

The Taliban has said that the group would consider any extension of the August 31 withdrawal deadline a “clear violation” of the peace agreement struck between the Taliban and the previous Trump administration and warned of “consequences” if it is extended. 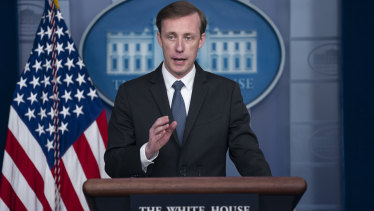 A Taliban spokesman said on Tuesday (AEST) that the withdrawal date was a “red line” that should not be crossed, raising the possibility of violence between the fundamentalist militant group and departing US forces.

“If they extend it that means they are extending occupation,” spokesman Suhail Shaheen told Sky News UK. “If they are intent on continuing the occupation, it will provoke a reaction.”

Biden’s national security adviser Jake Sullivan told reporters at the White House: “Ultimately, it will be the President’s decision how this proceeds. No one else’s.”

Biden has suggested that he may have to delay the withdrawal date to safely evacuate all Americans who want to leave Afghanistan and as many Afghan interpreters and other support staff as possible. 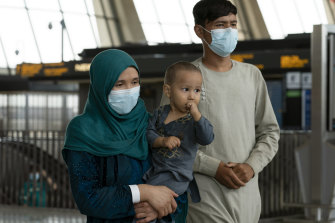 Families evacuated from Kabul, Afghanistan, after they arrived at Washington Dulles International Airport, in Chantilly, Virginia.Credit:AP

A day earlier Sullivan warned that the threat of a terrorist attack by the Islamic State posed a danger to the administration’s evacuation effort.

“The threat is real,” he told CNN. “It is acute. It is persistent. And it is something that we are focused on with every tool in our arsenal.”

Sullivan said that 16,000 people had been flown out of Kabul in the last 24 hours, a significant increase on the numbers from just a few days ago. 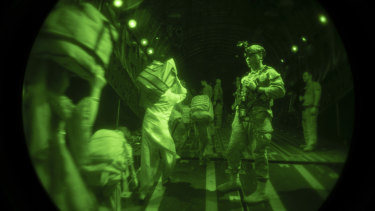 “We believe we have time between now and August 31st to get out any American who wants to get out,” he said, while leaving open the possibility the US will stay beyond that date.

“This operation is complex, it is dangerous, it is fraught with challenges: operational, logistical, human,” he said. “And it’s produced searing images of pain and desperation.”

Pentagon spokesman James Kirby said that Defence Secretary Lloyd Austin would discuss extending the August 31 deadline with Biden if necessary but added that “we’re just not at that point right now.”

“The goal is to get as many people out as fast as possible,” Kirby said. “While we’re glad to see the numbers that we got out yesterday, we’re not going to rest on any laurels.”

In a phone call on Tuesday (AEST) Biden and British Prime Minister Boris Johnson agreed to work together to ensure all those eligible to leave Afghanistan are able to, including after the initial evacuation phase is over.

The leaders of the G7 nations will hold an emergency virtual meeting on Wednesday (AEST) to discuss the Afghanistan withdrawal.