Our Australian winters, depending on where we live, can be short and mild or long and lugubrious.

There can be days and weeks – even months – lashed with neon slits of lightning and furious fists of rain, rolling across the mountains, plains, coasts and deserts of this island continent. 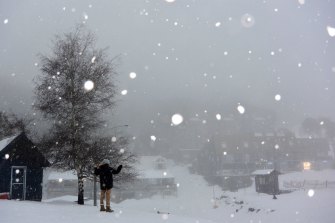 There can be days of milky sunshine, surprising snow drops and the last tendrils of frost slipping off naked and shivering trees.

There can be tempest – days of thunder and hail, and spoil-sport showers. Gutters gush and rivers rise and the weather plays havoc with public transport timetables.

But there are days, too, of singing in the rain because of the joy of simply being alive to whatever the season throws at us.

And there are days when winter seems so mellow that the season appears to have redefined itself and no longer seeps soggily into our skin as it did in the chilblained winters of the past.

We build winter into our days, recognising that it is a season with its own special consolations and an interiority denied us in brighter and longer hours. Birds hide and the days shorten so that dusk happens not long after school is out. This is winter’s tale.

But this is also a tale of resilience and regeneration, of subtle subterranean growth, of the burrowing in of survival, of battening-down and buttoning-up, of a primal story of seasons and crops and Mother Earth resting.

It is a time for gathering in, hibernating and conserving, waiting out the short cold days and preparing for the spring that will faithfully arrive later in the year.

Albert Camus wrote: “In the depths of winter I finally learned that within me there lay an invincible summer.” Perhaps we can usefully apply the metaphor of the seasons to our own lives.

Some would say that winter harbours the end – that it is the last season of life before the new season of birth heralded by spring. But so much is going on unseen, underground, away from the bright disclosures of summertime when the living is easy. In this fallow time a new chapter is being written.

In the end is the beginning.

Despite the gloaming, sparrows still peek and putter along the branches. Their winter hymn is one of cheerful solidarity, side by side, soul to soul. They are little winter warmers, a reminder of the glorious immutability and certainty of Creation; flighty feathered friends who accompany me chirpily from one season to the next; from the wrinkled woes of winter to the small serendipities of spring.

Ann Rennie is a Melbourne writer. Her book Blessed: Meditations on a Life of Small Wonders will be published by Laneway Press in August.