WASHINGTON — President-elect Joseph R. Biden Jr. will use the next four years to try to restore the environmental policies that his predecessor has methodically blown up, but the damage done by the greenhouse gas pollution unleashed by President Trump’s efforts cannot be easily reversed.

And experts say that impact on the climate may prove to be one of the most profound legacies of Mr. Trump’s single term in office.

“Historically, there is always a pendulum to swing back and forth between Democratic and Republican administrations on the environment, and, theoretically, the environment can recover,” said Jody Freeman, a professor of environmental law at Harvard and a former adviser to the Obama administration. “You can put rules back in place that clean up the air and water. But climate change doesn’t work like that.”

Most of Mr. Trump’s environmental policies, which erased or loosened more than 100 rules and regulations to control pollution in the air, water and atmosphere, can be reversed, though not immediately. Pollutants like industrial soot and chemicals can have lasting health effects, especially in minority communities where they are often concentrated. But air quality and water clarity can be restored once emissions are put back under control.

That is not true for the global climate, even if the protections passed by the Obama administration are soon restored. Greenhouse pollution accumulates in the atmosphere, so the heat-trapping gases emitted as a result of loosened regulations will remain for decades, regardless of changes in policy.

Moreover, Mr. Trump’s rollbacks of emissions policies have come at a critical moment: Over the past four years, the global level of greenhouse gases in the atmosphere crossed a long-feared threshold of atmospheric concentration. Now, many of the most damaging effects of climate change, including rising sea levels, deadlier storms, and more devastating heat, droughts and wildfires, are irreversible.

At home, Mr. Biden may find it more difficult than his former boss, President Barack Obama, to use executive authority to create tough, durable climate change rules because the six-justice conservative majority on the Supreme Court is expected to look unfavorably on policies that significantly expand federal agencies’ authority to regulate industry.

And abroad, the influence that the United States once had in climate talks was almost certainly damaged by Mr. Trump’s policy rollbacks and withdrawal from the 2015 Paris climate agreement. Those actions slowed down international efforts to reduce emissions and prompted other governments to follow the American lead in weakening emissions rules, though none have followed the United States out of the agreement.

All of that means that as Mr. Biden works to enact domestic climate change rules and rejoin the Paris accord, emissions attributable to Mr. Trump’s actions will continue, tipping the planet further into a danger zone that scientists say will be much harder to escape.

“Donald Trump has been to climate regulation as General Sherman was to Atlanta,” said Michael Gerrard, director of the Sabin Center for Climate Change Law at the Columbia Law School, referring to the Union general who razed the city during the Civil War. “Hopefully it won’t take as long to rebuild.” 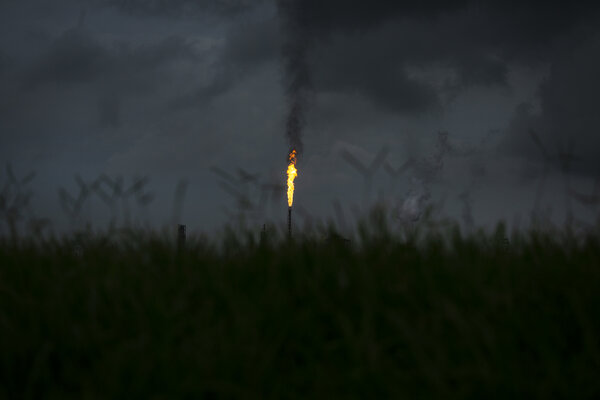 Scientists have long warned that if greenhouse gases in the atmosphere passed 400 parts per million, staving off a warming of 2 degrees Celsius would become far more difficult. The Paris climate accord agreed to that target because above it, the planet is likely locked into a fate of rising sea levels, stronger storms, widespread droughts and heat waves, and mass die-offs of coral reefs.

Carbon dioxide levels in the atmosphere first hit 400 parts per million in 2016, the year Mr. Trump was elected. But the president put economic growth above emissions targets, arguing that climate and other environmental regulations were harming job creation.

Economists see little evidence that Mr. Trump’s rollback of climate change rules bolstered the economy. Jobs in the auto sector have been declining since the beginning of 2019, and the trend continued despite the rollback of rules aimed at vehicle pollution from greenhouse gases. Domestic coal production last year dropped to its lowest level since 1978. In September, the French government actually blocked a $7 billion contract to purchase American natural gas, arguing that gas produced without controls on methane leaks was too harmful to the climate.

“Because global emissions in 2020 are so much higher than they were 10 or 20 or 30 years ago, that means that a year wasted in the Trump administration on not acting on climate has much bigger consequences than a year wasted in Ronald Reagan or George W. Bush or Bill Clinton’s administration,” said Michael Wara, a climate and energy expert at Stanford University.

Analysts say that the past four years represented a closing window in which the world’s largest polluting economies, working together, could have charted a path toward slowing the rate of planet-warming emissions. To do that, a scientific report 2018 found that the world’s economies would need to reduce emissions 45 percent from 2010 levels by 2030 — and the policies to do so should be implemented rapidly.

Instead, in the largest economy in the world, they began to fray.

“We’ve lost very important time on climate change, which we can ill afford,” said Richard Newell, president of Resources for the Future, a nonpartisan energy and environment-focused research organization in Washington. “There is severe damage. To ignore climate for four years, you can’t put a price on that. It’s a huge issue that needs to be confronted with long-term momentum and extreme dedication, and we have lost that.”

A recent analysis by the Rhodium Group, a nonpartisan research organization, found that if the five largest Trump climate control rollbacks, including rules on carbon dioxide emissions from auto tailpipes and power plants and methane leaks from oil and gas wells, were to go forward, an additional 1.8 billion metric tons of greenhouse gases would be in the atmosphere by 2035. That’s more than the combined energy emissions of Germany, Britain and Canada in one year.

Assuming Mr. Biden succeeds in re-implementing them, two years would pass before those rules would be legally finalized, resulting in still more emissions.

“If Biden puts the rules back in place, the emissions will be lower than the number in our study, but it will still have a lasting effect,” said Hannah Pitt, a co-author of the study.

Speaking of Mr. Trump’s rollback of Obama-era rules on auto-fuel economy, which would have lowered tailpipe emissions of carbon dioxide, she said, “The four years of a Trump administration plus another one or two years to get a rule in place — cars purchased in that period will be less efficient and burn more fossil fuels than they would have otherwise. And those cars can stick around on the road for 10 or 12 years. And once those greenhouse gases are in the atmosphere, they trap heat for decades.“

It is also not certain that Mr. Biden will be able to reinstate all those rules, let alone to make them more stringent. The Biden administration can legally reinstate environmental protections on some public lands that Mr. Trump opened to oil and gas drilling, but using executive authority to craft wide-reaching regulations on smokestack and tailpipe emissions may be more problematic with a 6-3 conservative Supreme Court.

Legal experts say that Mr. Trump’s appointment of Justices Neil M. Gorsuch, Brett M. Kavanaugh and Amy Coney Barrett could prove to be a significant part of Mr. Trump’s climate legacy, particularly if Mr. Biden is unable to persuade Congress to enact new climate change laws. Then he would seek, as Mr. Obama did, to use the executive authority of the Environmental Protection Agency to control greenhouse pollution.

“I think the new Supreme Court is going to make it much harder to implement climate policy by regulation than it was four years ago,” Mr. Wara said. “It is not obvious that Biden will be able to just go back to a more stringent version of the Obama regulations. It’s just not that easy when you have a court that looks with much greater suspicion at agencies that exercise executive-branch authority.”

Meantime, Mr. Trump’s actions, domestically and internationally, helped embolden the leaders of some other major economies to weaken their emissions standards.

“There has been a domino effect,” said Laurence Tubiana, who served as France’s chief climate ambassador during the 2015 Paris negotiations. “As Trump has destroyed U.S. climate policy over the past four years, he has caused some other countries to do the same.”

Ms. Tubiana pointed specifically to the president of Brazil, Jair Bolsonaro, who has styled himself after Mr. Trump on climate issues, calling the movement to reduce global warming a plot by “Marxists” to stifle economic growth, and to the prime minister of Australia, Scott Morrison, who, like Mr. Trump, has dismissed the link between climate change and wildfires while promoting the use of coal.

Still, Ms. Tubiana noted that other major economies have moved forward on announcing their plans to reduce emissions, with or without the United States. China, the world’s largest carbon dioxide polluter, recently pledged to eliminate its emissions by 2060. Japan pledged to do the same by 2050.

And, Ms. Tubiana said, a climate-friendly Biden administration will be welcomed back into the global community.

“The entire world is waiting for the U.S. to come back on climate,” she said. “There will be immense relief when it does.”

But Ms. Tubiana and others said it was hard to see how the United States could step back into the climate leadership role it held when Mr. Obama helped forge the Paris Agreement.

“The United States will no longer be seen as the single, individual leader,” she said, but rather will have to work within “a competitive partnership with the E.U. and China. But that may not be a bad thing.”