West Point military academy is starting to remove ALL Confederate statues and symbols from its campus – including a portrait and stone bust of Gen. Robert E. Lee

West Point military academy is beginning the process of removing all Confederate imagery from its campus, including a prominent stone bust and portrait of General Robert E. Lee.

The school began what it described as a ‘multi-phased process’ of removing or modifying the items during its holiday break this month. Any objects taken down will be placed in storage for the time being.

Also coming down this month is a bronze plaque that depicts the history of the United States and includes an image of a hooded Ku Klux Klan member. Earlier this year the school defended keeping the plaque up.

West Point was compelled to take the action by recommendations from a Congressional panel known as the Naming Commission, which was organized to decide what to do with Confederate names and imagery present at US military bases. 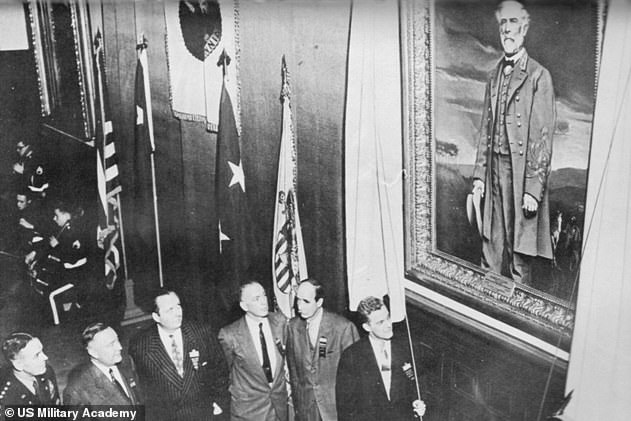 The 1952 unveiling of the painting of Robert E. Lee which is being removed from West Point 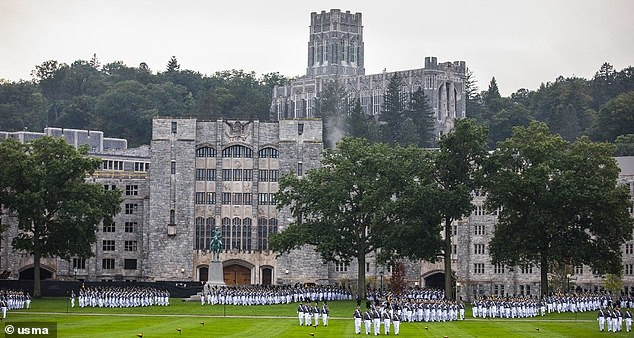 Lee, who turned coat on the United States to help lead the fight to preserve slavery during the Civil War, was a graduate and superintendent of West Point and has long held a strong presence at the school.

In addition to the painting and bust, there is a road, a gate, and number of buildings bearing his and the names of other Confederate leaders.

There is also a quote of Lee’s prominently displayed in a school plaza which will be replaced with ‘an appropriate quote about honor’ that will be decided on in the near future.

The school said it hopes to complete the renaming of campus locations by the end of next year. 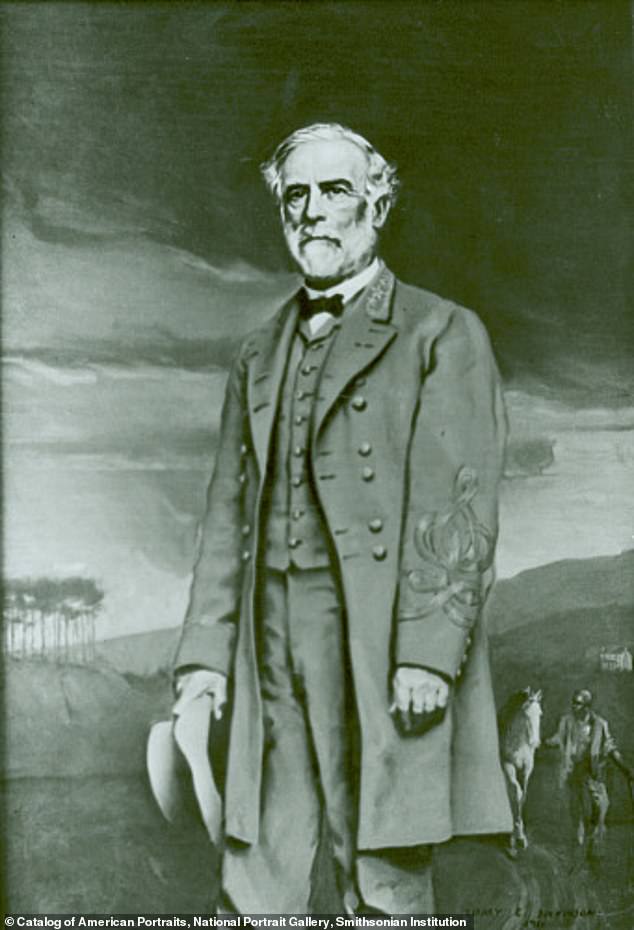 The painting of Robert E. Lee which is being removed from West Point military academy 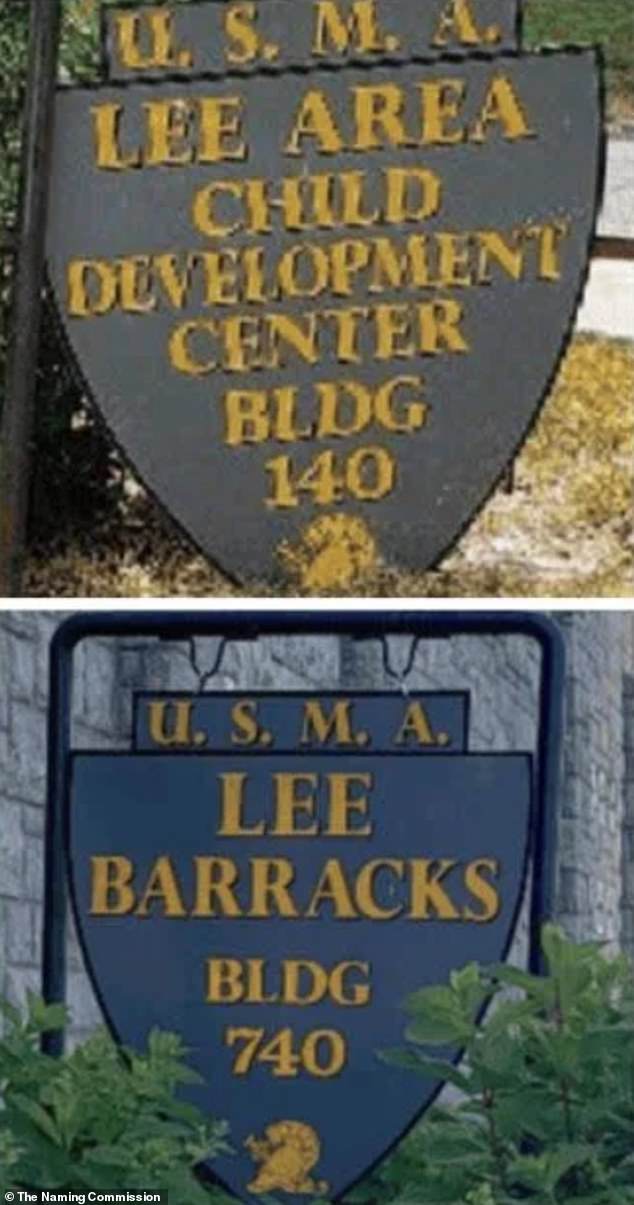 There are at least two buildings on the West Point campus named after Robert E. Lee

‘We will conduct these actions with dignity and respect,’ said school superintendent Lt. General Steven Gilland in a statement.

‘In the case of those items that were class gifts (specifically, Honor Plaza and Reconciliation Plaza), we will continue to work closely with those classes throughout this process. Any costs associated with the Commission’s recommendations will be resourced within the Department of Defense.’

It is unclear whether or not the bust and painting of Lee will remain in storage or be placed elsewhere, but the the school noted in its statement that the bronze plaque would be stored ‘until a more suitable location is determined.’

The stripping of Lee from the school comes amidst a recent push to remove Confederate imagery, statues, and names, from institutions and public spaces across the country. 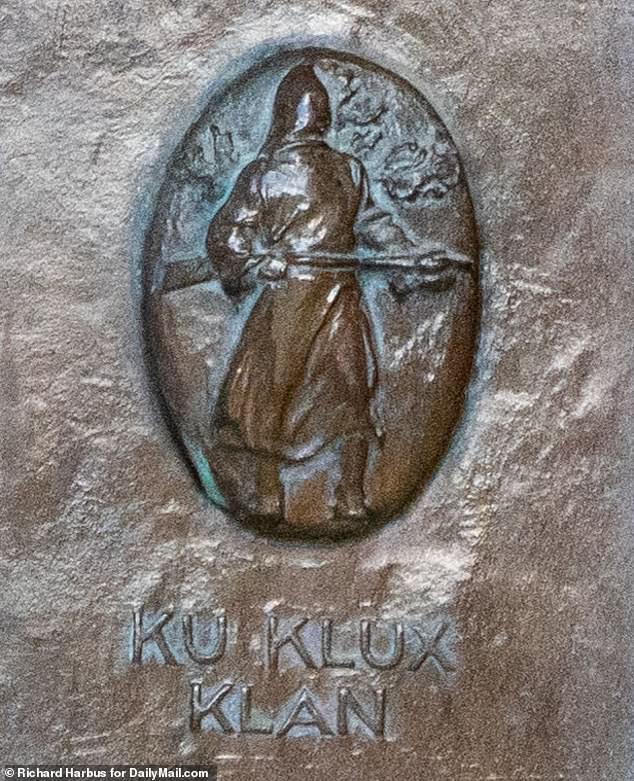 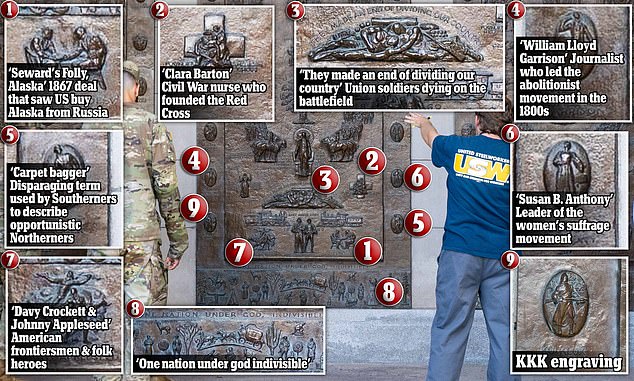 The academy defended the plaque, saying it was part of a much larger mural that depicted both the tragedies and triumphs in American history. Pictured: the plaques included in the middle bronze panel of the 1965 art piece

Last year Congress formed the Naming Commission to address how Confederate imagery should be handled at West Point, and at the Naval Academy in Annapolis.

The commission released a report of their findings in August, and noted they were not acting ‘with any intention of ‘erasing history.”

‘The facts of the past remain and the commissioners are confident the history of the Civil War will continue to be taught at all service academies with all the quality and complex detail our national past deserves,’ the Naming Comission said. ‘Rather, they make these recommendations to affirm West Point’s long tradition of educating future generations of America’s military leaders to represent the best of our national ideals.’

The commission largely called for changes to be made at West Point, and far fewer at the Naval Academy. 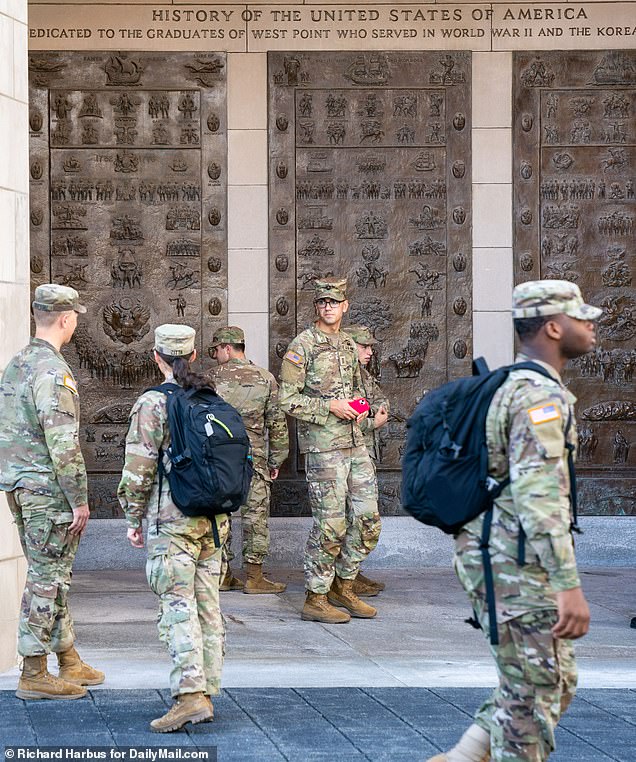 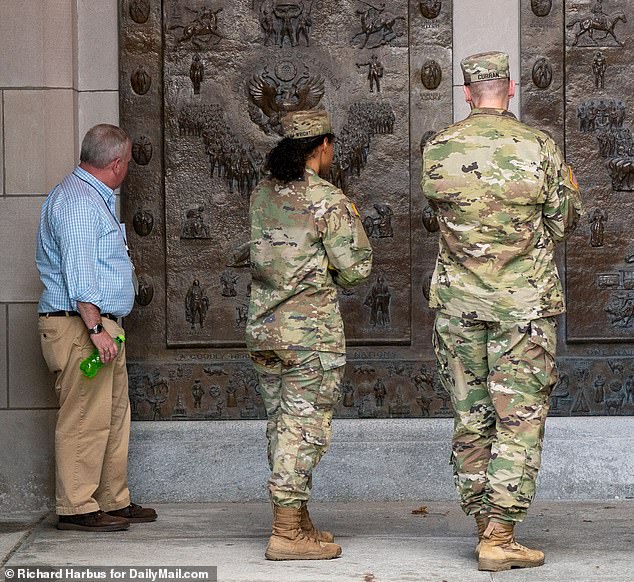 The school previously spoke in defense of the bronze plaque bearing Ku Klux Klan imagery when the commission recommended its removal in August.

In a statement, the prestigious academy said the plaque is but a small part of a larger bronze mural depicting both the good and evil of American history.

‘The artist, Laura Gardin Fraser, was an American sculptor who was commissioned to design the panels and wanted to create art that depicted ‘historical incidents or persons’ that symbolized the principled events of that time, thereby documenting both tragedy and triumph in our nation’s history,’ the academy said.

‘Among many other symbols, the triptych also includes individuals who were instrumental in shaping principal events of that time, and symbols like the ‘Tree of Life’ that depict how our nation has flourished despite its tragedies.’

Situated on a triptych at the entrance to the science center, the plaque bearing the KKK image – which shows a man in a hood and cape holding a rifle with the hate organization’s name emblazoned underneath – serves as the second segment of a three-part retelling of US history at the time, compartmentalized with the three plaques.

The Klan member is one of two villainous characters included in the monument, with the other being a ‘Carpet bagger,’ a disparaging term used by Southerners to described opportunistic Northerners in the Post-Civil War period.

Following the end of the Civil War in 1865, West Point Academy maintained its distance from its Confederate graduates.

The academy rejected all proposals to establish monuments to the Confederacy and refused to invite any Confederate leader until 1898, where a monument dedicated to all West Point cadets killed in action was built.

The building, however, was created with the rule that no Confederate names be commemorated or even mentioned within its halls.

It wasn’t until 1930 that West Point began accepting and installing Confederate memorial as the Lost Cause Movement was gaining traction.

The Lost Cause refers to the rhetoric that the South was heroic in its fight against the North and that slavery was not at the center of the Civil War, but rather states’ rights.

The movement became popular throughout the nation, garnering sympathetic views of the Confederacy and even the Ku Klux Klan.

During this period, several members and former members of the KKK rose to prominent positions, including US Senators Theodore Bilbo, Robert Byrd and Hugo Black, the later of whom was appointed to the Supreme Court.

By 1930, the Klan said its membership claimed 11 governors, 16 senators and 75 congressmen, The Washington Post reported.

Although it’s not clear when West Point added the bronze plaque depicting a Klan member at Bartlett Hall, it would have most likely been added during this period.