Four of the bridge’s five outbound lanes have been closed for maintenance works since Boxing Day and will reopen at 9pm on Saturday. 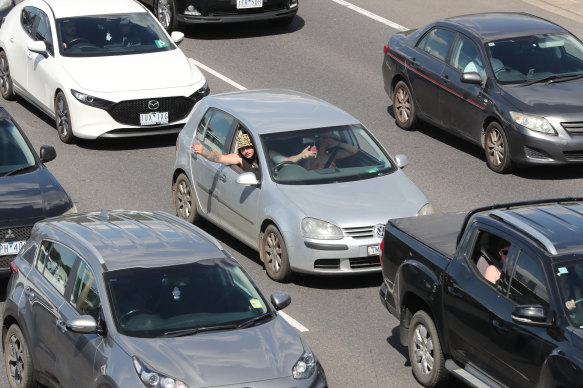 Traffic banked up on the West Gate Freeway during the week.Credit:Paul Rovere

The lanes were initially scheduled to reopen at 5am on January 4, but the planned 10 days of road works were cut to six.

The closures were a thorn in the side of holidaymakers this festive season as they faced delays of more than 90 minutes on the West Gate Freeway between the city and the bridge, and on city-bound lanes of the Monash Freeway, the Domain Tunnel and at the Bolte Bridge/CityLink.

This was exacerbated for those using Google Maps for directions and travel times as the web mapping platform temporarily underestimated delay times on the freeway. The glitch was addressed, however, and drivers were eventually directed away from the congestion.

Roads Minister Melissa Horne thanked Victorians for their patience and understanding during the delays and those who undertook the major works.

“A massive thank you to the hardworking crew for their exceptional efforts to finish the job early – they have worked tirelessly around the clock on the outbound lanes of the bridge, ensuring it remains safe for many years to come,” Horne said.