Singapore: Indonesia hopes to see Australian travellers return to Bali by the end of the year and is ready to talk to the Morrison government about how to get them back.

The holiday island and Aussie playground will finally begin welcoming back foreign tourists from select countries including China, Japan and New Zealand this week as virus numbers ease on the island and across the Indonesian archipelago.

The initial intake won’t include travellers from Australia because of Canberra’s tough border measures but in an interview with The Sydney Morning Herald and The Age, Indonesian Minister of Tourism and Creative Economy Sandiaga Uno said Australia was very important to Bali’s reopening plans.

“If you guys are ready to discuss [travel to Bali] I’m ready in 15 minutes. You are our No.1 tourist market and we need to make sure that you guys are comfortable before we initiate the discussions. But we’re ready anytime,” he said.

“You can choose your friends but you cannot choose your neighbour. You are our closest neighbour, our ally. We’re partners in this together.”

Sandiaga said Jakarta fully respected the Morrison government’s strategy of tight border controls, which have left Australian citizens and permanent residents unable to fly out of the country during the pandemic unless they could obtain an exemption. 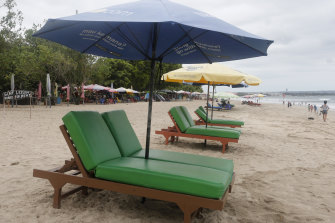 The scene at Kuta beach, Bali, last week. Foreign tourists will be allowed back to the island from Thursday. Credit:AP

Qantas has begun offering flights to and from Denpasar from next March but with Prime Minister Scott Morrison flagging the lifting of quarantine caps and a switch to seven-day home isolation for fully vaccinated returning travellers from November, Sandiaga hopes Australian travel to Bali can resume earlier.

“The end of the year would be perfect because that’s [the] Christmas break,” he said.

An opportunity for face-to-face talks about Bali between Sandiaga and Australia’s Trade and Tourism Minister Dan Tehan was missed late last month because the Indonesian minister didn’t know Tehan was in Jakarta.

Sandiaga said Tehan’s host for the trade-focused visit, Trade Minister Muhammad Lutfi, wasn’t aware that Tehan also held the tourism portfolio and by the time the message got through he wasn’t available, so had his deputy meet with the Australian instead. 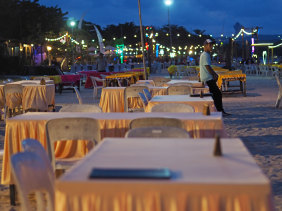 Bali’s travel-reliant economy has been crushed by the pandemic.Credit:Getty Images

Asked during a virtual press conference in Jakarta about when Australians might be able to travel to Bali again, Tehan vowed to “stay very closely in touch” with Indonesia on the plans.

“Obviously we have to hit that 80 per cent national vaccination rate … then we have to work through in partnership with countries around the world exactly how that opening up will take place,” Tehan said.

Indonesia, which has recorded more than 142,000 deaths to the virus, has seen new cases fall from over 56,000 a day in July to less than 2000 daily after the introduction of strict protocols.

In Bali, where 78 per cent of the population was fully vaccinated as of Friday after President Joko Widodo put the island at the front of the queue, new infections are now down to double digits each day.

But with officials being told by public health experts that a third wave later this year is all but inevitable, authorities are taking “baby steps” with Bali. Foreign tourists will, from this week, have to undergo eight days in hotel quarantine on arrival, with the government leaning towards only letting in travellers who are fully vaccinated.

The country will aim to convince Australians that Bali is a safe destination again “based on science”, Sandiaga said.

“Once the vaccinations reach their intended target before hopefully the end of the year, we’re going to start the booster program and Bali will be the priority area,” he said.

“When the data will confirm that the number of new cases, the number of active cases, the bed occupancy rates, testing, tracing … are at a respectable level, it is a good advertisement for incoming Australian tourists to come in.“

He said in terms of virus-related requirements and certifications, “Bali would really be in line with what the Australians are preparing [for] post-pandemic”. 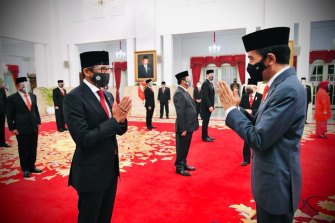 There were 1.23 million Australian visitors to Bali in 2019, more than any other nationality.

But while the absence of foreign tourists has crushed the island’s economy, it is looking to pivot to a less-is-more approach.

Backpackers and party seekers won’t be shut out but the government has a different kind of tourist in mind for Bali, believing the island is suitable to post-pandemic travel that is “more personalised, customised, localised and smaller in size”.

“Bali continues to stay on top of priority lists for people to visit but we have to be very careful. We need to make sure that Bali can continue to attract that demand and we should not [have] a strategy that is actually going to risk Bali’s attraction,” Sandiaga said.

“I think the new trend of tourism will be focusing more on nature and culture. It will be focused more on sustainability and quality-based tourism,” he said.

“People will need to spend longer time [abroad]. They could start a ‘workcation’ as well. They could actually be in Bali and work for a Sydney-based investment firm.”

Bali is also due to host next year’s summit of the G20 when Indonesia assumes its presidency in 2022.