Mother nature is trolling us! Internet responds to weather forecast that looks exactly like a Teenage Mutant Ninja Turtle

Twitter users were unable to contain their disbelief after a weather map appeared to resemble a Teenage Mutant Ninja Turtle.

The National Weather Survey’s Storm Prediction Center tweeted the unintentionally hilarious forecast of potential storms in the southeastern US at 11.30am yesterday.

Areas with ‘slight’ thunderstorm risks were represented by yellow blotches for eyes, with a dark green ‘marginal risk’ area seeming to illustrate an eye mask around them.

The lighter green area surrounding the Ozark Plateau, where storms have already been spotted, gets pretty close to the Turtles’ famous apple-coloured appearance.

And a white-coloured ‘smile’ below was even made perfect with Georgia and Alabama state lines for teeth, completing the unlikely meme.

The memes came as dozens of towns and cities across the southeast and southwest are set to see record-high temperatures well above 100F. 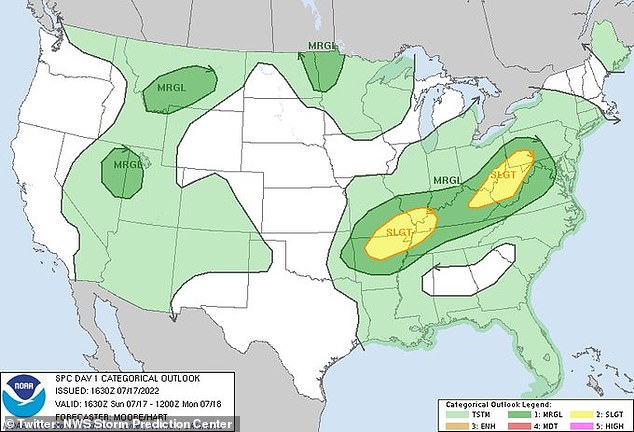 Yellow ‘eyes’ were areas with a slight storm risk, with an eye mask made of ‘marginal’ regions. The surrounding apple-coloured states already face storms, with a toothy smile in AL and GA 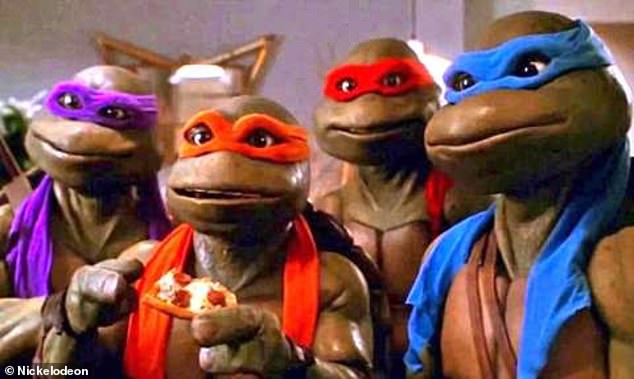 Teenage Mutant Ninja Turtles, pictured in the eponymous 1990 film, in their trademark outfits

But shortly after the Center’s tweet yesterday morning, replies rapidly made the connection between the NWS image and the iconic comic book characters.

The most popular replies included GIFs of the Ninja Turtles, signaling the similarity.

Yet some tweeters took the joke further, with one user photoshopping a new TMNT comic titled: ‘Risk across the Ozark Plateau’.

Another wrote: ‘Looks like a 60% chance of Cowabunga across parts of the south east’, referencing the comic, television and film franchise’s famous catchphrase.

And one person added: ‘It’s official. Mother Nature is trolling us.’

The memes came as weather warnings were issued across the southeast and southwestern US as the new week began.

Temperatures are set to soar above 100F across Texas, Arizona, New Mexico, Louisiana, Mississippi, Arkansas, Oklahoma and California over the coming days.

Around 50 million Americans are set to experience scorching ‘ring of fire’ heat.

The National Weather Service today issued an ‘excessive heat warning’ in much of Oklahoma and west Texas. 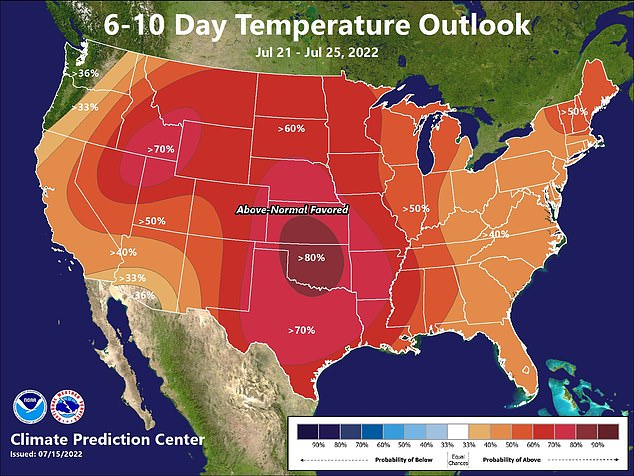 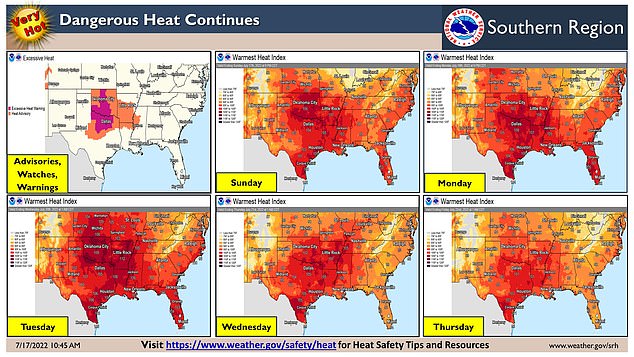 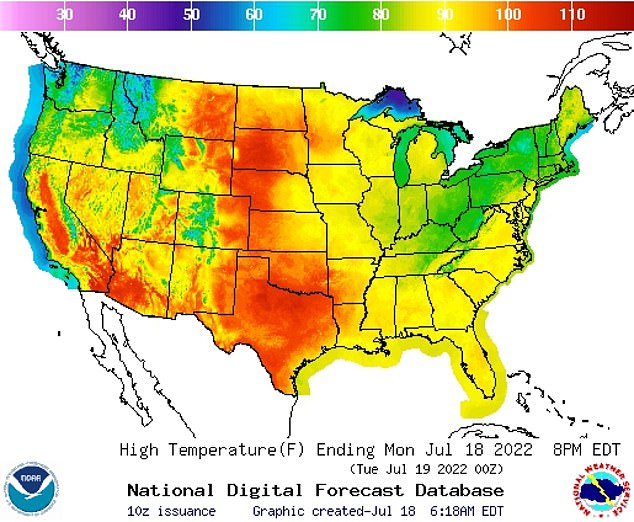 Storm activity has also picked up in Montana, with terrifying footage showing a huge dust storm prompt a fatal pileup.

It reached that high last summer, too, with the previous record 102F, in 1994. The city’s Great Salt lake risks becoming a ‘Great Dust Lake’, on leading geologist said.

The lake contains little more than one-fourth the volume of water now as it did at its high point in 1987, the US Geological Survey stated.

The lake has lost nearly half its surface area from the historic average, exposing some 800 square miles (2,000 square km) of lakebed – an area larger than the Hawaiian island of Maui.