Virginia Christensen remembers the day Keanu Reeves walked into Palm Beach Fish and Chips: “All the girls had an absolute meltdown at the fryers.”

He had been one of a number of customers “from movie stars, to pop stars, to Home and Away stars and footballers” to join locals and tourists from all over Sydney in ordering simple Australian fare to eat with a nice view over Pittwater, the former owner of more than 20 years said. 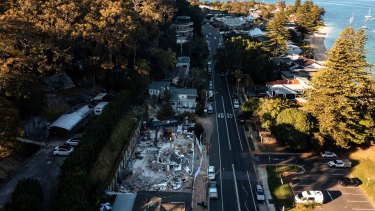 Palm Beach Fish and Chips, an institution for Sydneysiders visiting the northern beaches, has been demolished.Credit:Nick Moir

“The sunsets were glorious. Sometimes we would just stop and turn and gasp at the sunsets,” Ms Christensen said of the other slices of life the job brought. “The odd sea creature you’d be told to have a look at … the staff being able to sit under the Norfolk opposite on their breaks.”

“It’s all levelling,” she said. “It’s an iconic Australian experience.”

Radio host and northern beaches local Wendy Harmer fondly recalled going there with her father, and her own children, and walking across the road to sit at the beach opposite (“it will be really, really missed”), while Planning Minister and local MP Rob Stokes labelled it a Pittwater institution.

As of Thursday, the spot from which those memories sprouted has been razed to rubble, and its future is uncertain, after an application to build six luxury apartments in its place on Barrenjoey Road was withdrawn following a wave of community opposition. 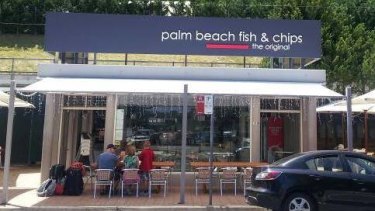 The exterior of Palm Beach Fish and Chips.Credit:Facebook

The application, which was to modify a previously approved development application for apartments on the site, was made on behalf of tech entrepreneur Robin Khuda, founder and chief executive of AirTrunk, who bought the property for $6 million last year with plans to turn it into a three-storey block with shops on the ground floor.

Mr Khuda, who is also seeing local pushback on his development plans for beachfront apartments along Manly’s North Steyne, has bought up a swathe of properties in sought-after locations, including Mosman, the eastern suburbs and Byron Bay.

But his plans for Palm Beach, the secluded northernmost peninsula of Sydney’s northern beaches, brought about fierce local objection that the area’s tranquil, village feel would be chipped away by a building, as one objector put it, that was more aligned to “Parramatta or Chatswood”.

One Palm Beach property owner, Janette O’Neil, called the plans for apartments next to the historic Barrenjoey House, when coupled with another separate application for a four-storey building close nearby, “a disgrace”. 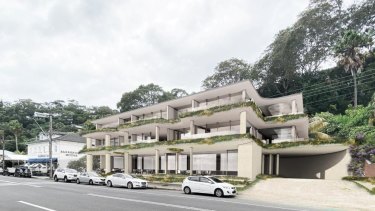 An artist’s impression of the proposed apartment development on Barrenjoey Road, Palm Beach, that has since been withdrawn.

“This is not Mosman, Noosa and heaven forbid, Dee Why, a hotbed of high rise a few kilometres down the coast. Residents are angry over development plans that could ruin our elite enclave of Palm Beach,” Ms O’Neil wrote in her public submission.

Northern Beaches mayor Michael Regan offered a more diplomatic point of view: “Everyone wants to hang on to memories of the past. I can remember going to Palm Beach as a boy. But it’s no different to the rest of Sydney, everything changes.”

However, just what change will for the moment hang in the air, with the application withdrawn this week and the expectation something at least slightly different will be put in its place.

Cr Regan said the council requested the application be withdrawn “as the proposed changes were considered to be beyond the scope of a modification and that a whole new DA would be required”.

The Herald has sought comment from Mr Khuda through AirTrunk, however received no response.

Ms Christensen said she hoped the new development would be in step with the suburb’s seaside village feel and provide a place for people to come and get some fish and chips to eat.

“I don’t want to see it in pieces,” she said. “We put our hearts and souls into it. It’s an emotional day for me too.”