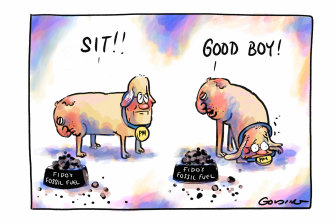 We need our parks

Locals call Kingswood Golf Course the green heart of Dingley Village. In 2018 there were 8000 objections to AustralianSuper’s plan to rezone it for high-density housing.

After considering the submissions and on strong planning grounds, Kingston Council abandoned its consideration of the rezoning. Planning Minister Richard Wynne then created a Golf Course Redevelopment Advisory Committee and Kingswood is first cab off the rank (“Locals teed off at golf course plan”, The Sunday Age, 17/10).

Mr Wynne is riding roughshod over the wishes of the local community, the authority of council, local democracy and over the planning scheme he is supposed to protect. He is plunging a dagger into Dingley’s green heart.

He says he wants a construction-led recovery, but one lesson from COVID-19 is how much we need our local parks and open spaces. Like golf courses, some of which opened their gates to local residents to get some fresh air on the fairways. Not AustralianSuper, which kept Kingswood’s gates firmly closed.
Rosemary West, Edithvale

Premier misses the point
In response to NSW Premier Dominic Perrottet’s grab for the Australian Grand Prix, Victorian Premier Daniel Andrews, has declared that the GP is going nowhere – because Victoria is “going to be one of the most vaccinated places anywhere in the world. That makes us one of the safest places in the world” (“GP is going nowhere, Premier tells NSW”, The Age, 23/10).

However, COVID safety regarding the desirability of hosting the GP, is not the point. Ever since Ron Walker’s and Jeff Kennett’s 1993 “coup” in financing the “theft” of the GP from Adelaide, there has been strong and continuing opposition to its presence.

Many Melburnians are sick and tired of the noisy, smelly, polluting disruption that is the GP. Not to mention that although it may be profitable for a handful of vested interests, it has always run at a loss and had to be heavily subsidised from the pockets of guess who.
Deborah Morrison, Malvern East

Catchy, empty words
The prime marketer’s oft repeated phrase “technology not taxes” ticks all the boxes.
Only three words with a catchy alliteration and the juxtaposition of two essential truths. Technology will be what solves the climate crisis and nobody likes paying taxes. As meaningless distractions go it is clever, cunning and cut-through.

But can I suggest another phrase that better describes Morrison’s climate change policy: “Slogans not substance”.
Graeme Henchel, Yarra Glen

They are not leading us
One requirement for citizens accepting leadership is a belief that their leaders actually believe in, better still, are passionate about, the ideas they are being asked to follow. Co-operative majority movement in the right direction will never happen unless this condition exists.

It is clear that the Coalition government is not able to lead Australia to a safe climate situation while it portrays denial, grudging acceptance of some minimal action, preparedness to acquiesce to bribery, crab-crawling in circles, as leadership in response to climate change.

Labor has not provided much evidence it would be better.

At this pivotal moment in history, we should be listening to and following our state governments, many enlightened business leaders, investors, farmers and environmental groups, who are demonstrating an understanding of and commitment to the issues, and better still, passion around our need to act with urgency.
Howard Tankey, Box Hill North

Stick to the facts
While I sympathise with Parnell Palme McGuinness’ plight in reconciling News Corp’s complete about face on climate change (“Do you want the good News or the bad?”, The Sunday Age, 17/10), I can reassure her that their motives are pure: they did it for the money.

When your advertisers arc up it’s time to change. More worrying is her willingness to quote Nationals senator Bridget McKenzie’s example of failure of green jobs in Moree (based on a sample size of one) and not Matt Kean’s comprehensive demolition of Ms McKenzie the next day.

A true physician
While I was saddened to read of the death of Dr Rodney Syme, I am grateful to have briefly met this remarkable man. He was a true physician – he listened to people, heard their stories, and advocated passionately for them to retain the dignity of choice.

His family will take comfort knowing he was instrumental in giving countless people the gift of choice, at a time in their lives when few choices remain. Thank you, Dr Syme.
Carol Treyvaud, Ocean Grove

A strange ruling
Amid all the celebrations for the end of lockdown, one group of people have missed out.
Those of us who live in retirement communities have found that our community facilities are classed as community centres (even though they are not open to the public) and as such cannot open up.

The wrong way around
Opening hospitality at 70 per cent and retail at 80 per cent doesn’t seem to make sense. In hospitality venues your mask is removed to eat and drink, while your mask remains on while shopping in retail outlets.

Perhaps it should have been vice versa.
Bill Trestrail, St Kilda