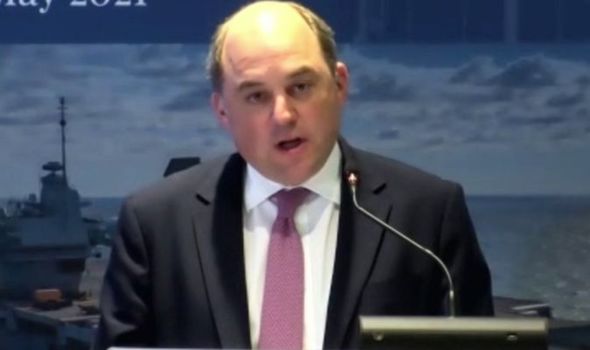 Mr Wallace made the comments as he delivered the Sir Henry Leach Lecture at the International Institute for Strategic Studies on Wednesday morning.

It was announced last month that the aircraft carrier HMS Queen Elizabeth would depart for its first operational deployment in May in what the Ministry of Defence (MoD) described as the “largest concentration of maritime and air power to leave the UK in a generation”.

The £3 billion warship, with eight RAF F35B stealth fighter jets on board, will be accompanied by six Royal Navy ships, a submarine, 14 naval helicopters and a company of Royal Marines.

The CSG, which will carry out visits to India, Japan, South Korea and Singapore, will include the US destroyer USS The Sullivans and the Dutch frigate HNLMS Evertsen.

A squadron of 10 US Marine Corps F35B Lightning II jets will also be embarked on the carrier.

Speaking this morning, Mr Wallace said the CSG is going in a “confident but not confrontational manner”.

He said it would include transits of the South China Sea, East China Sea and Philippine Sea.

Mr Wallace added that HMS Queen Elizabeth will participate in a three-carrier exercise in the Pacific Ocean.