Fresh community transmission of COVID-19 and a requirement for office workers to wear masks all day at their desks have thrown into doubt next week's planned return of tens of thousands of employees to Melbourne's CBD.

Major employers say they are now taking a cautious approach, and the government is reviewing plans to allow up to 50 per cent of private sector workers back into the office from Monday.

ANZ – which employs about 11,000 people in the city – is reviewing the timing of its plans to bring workers back, amid changing rules about the use of masks and the return of community transmission of coronavirus in Victoria. 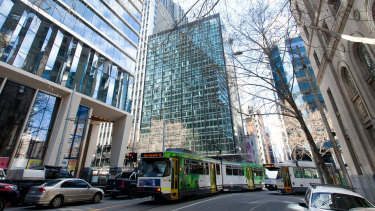 The government will review plans to allow up to 50 per cent of private sector office workers to return to the CBD from Monday, but most companies are taking a cautious approach anyway.

Offices in the private sector were set to be able to return to 50 per cent capacity from next week under relaxed restrictions announced by Premier Daniel Andrews last month. At the time, Melbourne lord mayor Sally Capp said the increased caps for offices would provide a "major boost" to the Victorian economy.

"Each city worker that returns means another coffee bought in our local cafes, an after-work drink in our bars and pubs and extra customers for our retail stores," she said.

Most large employers surveyed by The Age say they won't bring back large sections of their workforce next week, even if they are able to do so. 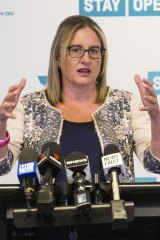 Ms Allan said the state was in "a very strong position" to slow and even stop the virus spread, and at this stage the government remained committed to allowing up to 50 per cent of workers to return.

"We'll be having meetings over the course of this week," she said. "The advice at this stage is that those settings won't change but of course, as all of our settings are, they're advised by the data and the health advice that goes with the data."

Australian Super will not bring workers back into the office until Febrary, and a spokesman said the return would be "staged and flexible".

Westpac, which employs about 1500 people, is in a period of corporate shutdown until January 18. A spokeswoman said the organisation planned to progressively increase the number of people working in its corporate offices when it was safe to do so.

The City of Melbourne has felt the loss of city workers keenly. Chief executive Justin Hanney said city workers comprised about half of the 1 million people who entered the city every day before the pandemic struck.

"Ensuring the safe return of city workers remains a priority to help boost Melbourne’s economic recovery and reinvigorate our streets," he said.

"Every extra worker we can safely bring into the city will make a major difference for our local businesses."

Property Council of Australia Victorian interim executive director Michael Kandelaars said 61 per cent of respondents to a council survey wanted to come back to the office.

"Provided that employers have a COVID-safe plan in place and the health advice doesn't change between now and Monday, we would continue to encourage the government to remain on track."