As Sydney's coronavirus outbreak extends into its third week, and appears now to have spread to Melbourne, it is self-evident there is no quick fix in sight. This means the detailed and laborious work of testing, tracing and isolating individuals will need to stay at scale for some time to come – well into the new year. So much for a summer reprieve.

It's a battle well worth waging. For while many nations have learnt to live with large numbers of daily positive infections, almost becoming numb to the high death tolls, Australia's geographic advantage has allowed it to take a different path. Its island continent status has allowed it to closely manage those coming into the country. And while the hotel quarantine system has had its flaws, it is much preferable to be contending with occasional breaches there than with the extended and relatively open borders most nations deal with.

But while the external borders may be tightly managed, this has not stopped the country being divided along the lines of its internal borders. For all the prolonged negotiations and commitments at national cabinet to reopen borders by Christmas, it took only until New Year's Eve for a number of states to shut up shop again. 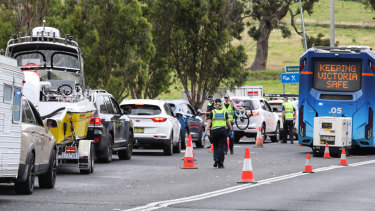 Thousands of Victorians rushed to get through the NSW border checkpoints. Credit:Rachel Mounsey

Many who were finally extending their travels over summer beyond their own state's boundaries have been brought sharply back to earth. Victorians rushing to return home before the state's border closed to NSW spent hours in traffic jams on New Year's Eve. While holidaymakers were probably aware things could change quickly, border restrictions have been introduced so rapidly and harshly, in some cases with poor signals given, that many people were still caught short.

As the Melbourne outbreak will probably prove once again, the virus needs little encouragement to hitch a ride. Before Christmas, NSW Premier Gladys Berejiklian was on shaky ground denouncing other states for what she called their overreactions to Sydney’s outbreak. Now it appears to have seeded a suburban Melbourne cluster. Earlier in the year, it spread in the opposite direction, from Melbourne to Sydney, the busiest transit route in Australia.

During the last pandemic, in early 1919, Australia’s first case of Spanish flu was admitted to hospital in Melbourne. Within a month it had spread to Sydney via an infected returned soldier who had travelled from Melbourne by train. NSW was so incensed, it shut the borders.

With Victorians having spent many weeks in hard lockdown to contain the virus, it is understandable they are being hyper-vigilant, including a quick return to mandatory mask wearing in indoor public settings.

Ms Berejiklian's approach has been markedly less aggressive, despite the larger and more widespread nature of the Sydney outbreak. She has defended her less aggressive approach and she clearly has confidence in a contact tracing team that has a proven record of quashing outbreaks.

Ms Berejiklian has suggested to residents in the southern part of Sydney's northern beaches that there might be some easing of restrictions on Saturday. To the disbelief of many in Victoria, the Sydney cricket Test will go ahead with the SCG at half capacity. Prime Minister Scott Morrison, who famously declared as the first wave of the virus hit in March that he would go to a final Cronulla Sharks game before reversing course, said on Friday he would go to the cricket if he could.

These are signs of a growing confidence. But there are mixed signals. Chief Medical Officer Paul Kelly said that despite being a cricket tragic and being happy for the Sydney Test to go ahead, he would not take his elderly family members to see it.

During the long winter lockdown, Victorian Premier Daniel Andrews came under harsh criticism – from national business groups, his state's own federal Liberal MPs, and from many ordinary people – for running what Tony Abbott described as a “health dictatorship”. Ms Berejiklian has taken a different tack: she is trying, with the help of her “gold standard” contact tracers, to steer her state along the cliff edge, protecting health while limiting the economic damage.

It's a line that other countries have tried and failed to tread, but the declining case count in NSW gives some cause for optimism – despite the sniping in some quarters that NSW has exported its problem to Victoria.

In the northern hemisphere, meanwhile, as winter stretches on, the death tolls are mounting despite the early vaccine rollout. Australians, it seems, must suffer closed borders, mask wearing and crimped social gatherings so our summer outbreak does not roll into a harsh winter. The lesson is that, even though we have kissed 2020 good riddance, the need to stay vigilant remains.

Note from the Editor