Heroic veterans of the D-Day landings are sailing from Portsmouth to Normandy as the world marks the 75th anniversary of the offensive.

After US President Trump joined Queen Elizabeth II to pay tribute to the brave soldiers who gave their lives in Normandy on June 6, 1944, former servicemen headed out to commemorate Operation Overlord.

The World War II operation was divided into air and amphibious landings and this evening a flotilla was pictured setting sail for the French coast.

Prime Minister Theresa May waved of veterans in Hampshire just after 7pm as they retraced the route they’d taken as young men decades ago. 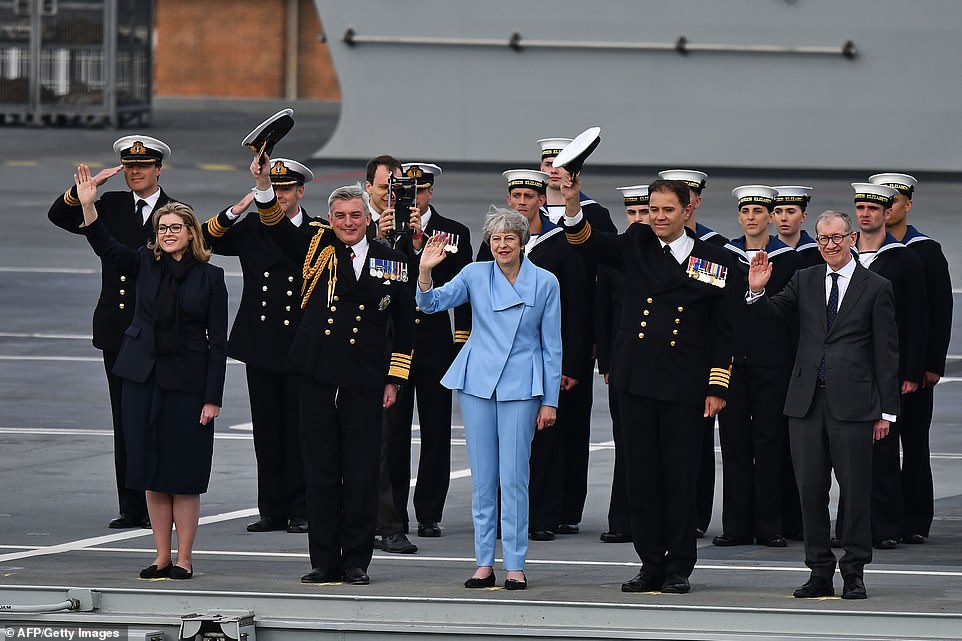 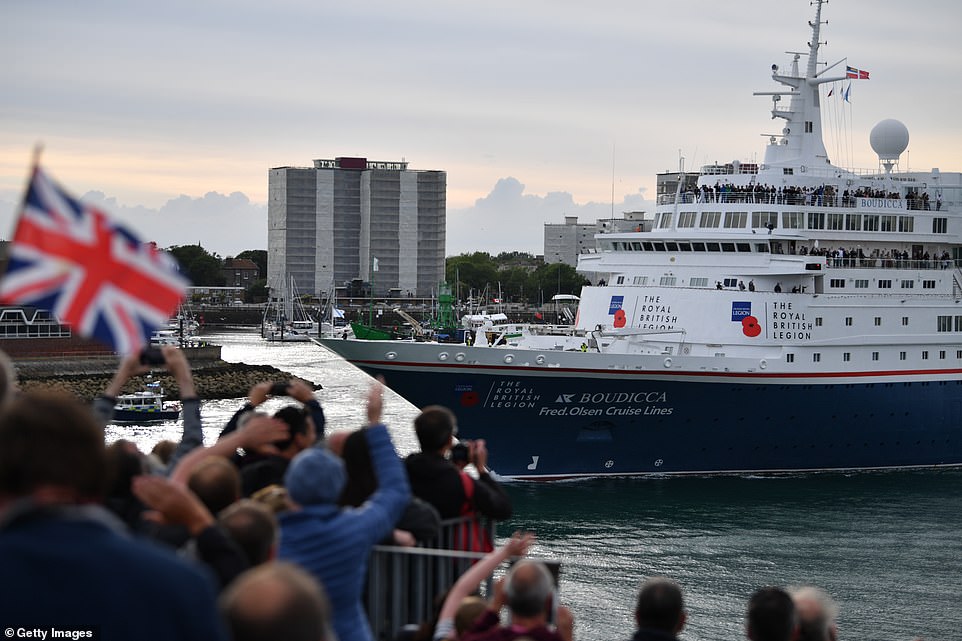 The Boudicca cruise ship, commissioned by the Royal British Legion, departs from Portsmouth, Hampshire, this evening to commemorate the 75th anniversary of the decisive D-Day landings 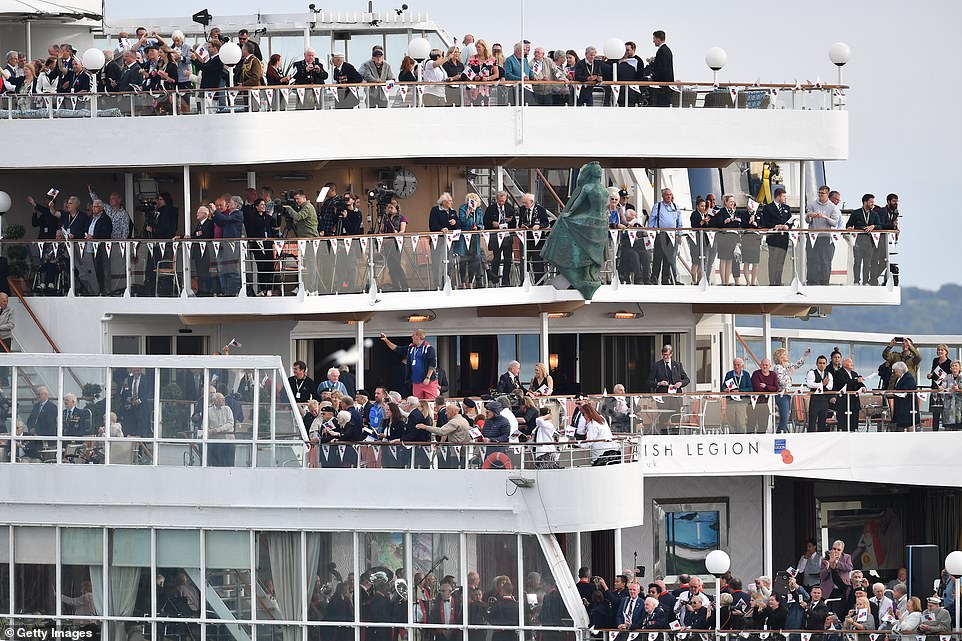 The heads of 16 countries involved in World War II joined Her Majesty on the south coast of England to see off the cruise ship Boudicca.

The vessel is chartered by the Royal British Legion and set sail after a similar demonstration was held to honour those who participated in the airborne assault. 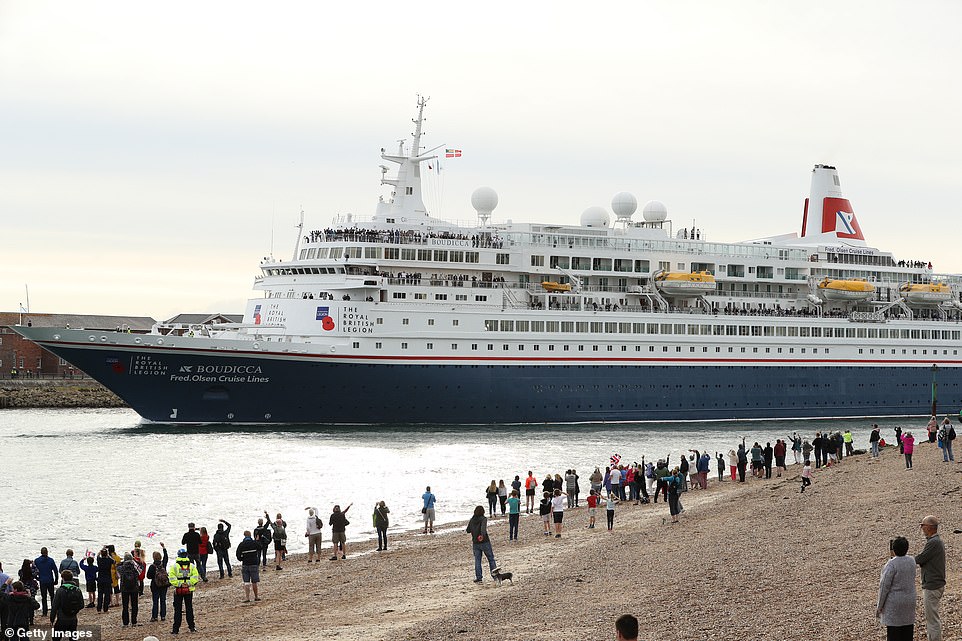 Pictured: The Boudicca sets sail from Portsmouth, Hampshire, where well-wishers waved off veterans retracing the route they took to Normandy on D-Day 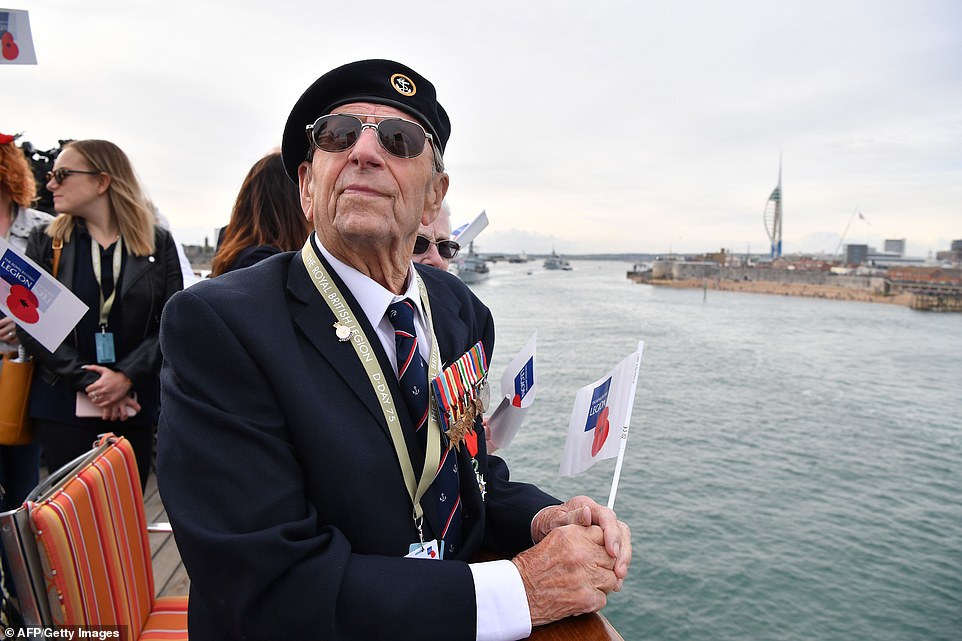 A D-Day veteran is pictured on board the Boudicca, which set sail from Portsmouth in Hampshire today to commemorate the 75th anniversary of the Normandy landings, which changed the course of World War II 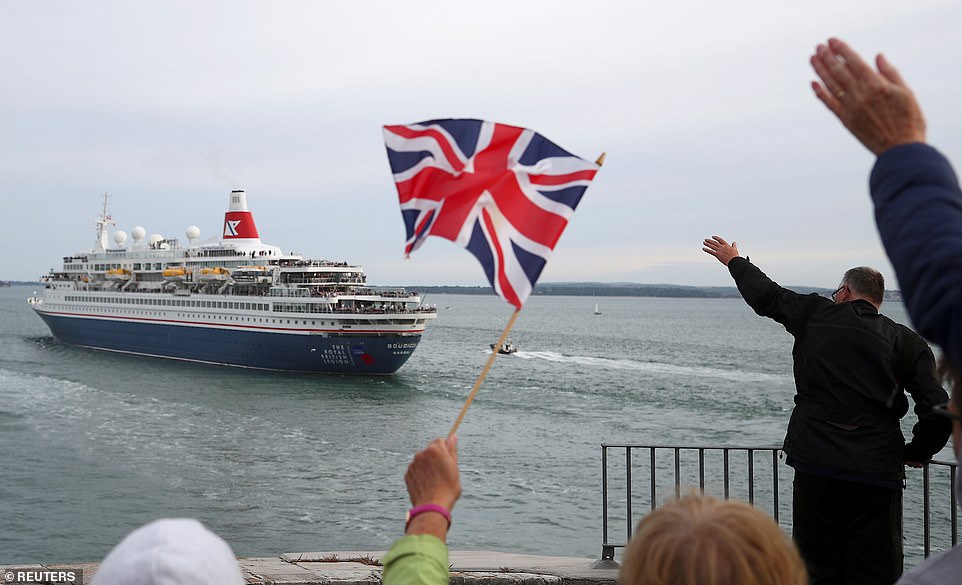 Paratroopers aged in their 90s jumped from Dakota war planes over Normandy this afternoon as they re-enacted the bravery of soldiers who were central to the decisive D-Day landings 75 years ago.

About 280 took part in the jump over the French coast this afternoon, including veterans of landings in World War II. Harry Read, 95, was pictured leaping from the skies and landing in Sannerville in front of crowds of admirers.

Aircraft were pictured taking to the skies in Cambridgeshire, at the Imperial War Museum, before heading to France to commemorate those who died in the fighting on June 6 1944.

Their display brought to life the daring efforts of Allied troops, who secured the first step on the road to defeating the Nazis with the offensive.

Tearful veterans gathered in Portsmouth, Duxford and Normandy as Queen Elizabeth II and US President Donald Trump hailed the bravery of those on the front line. 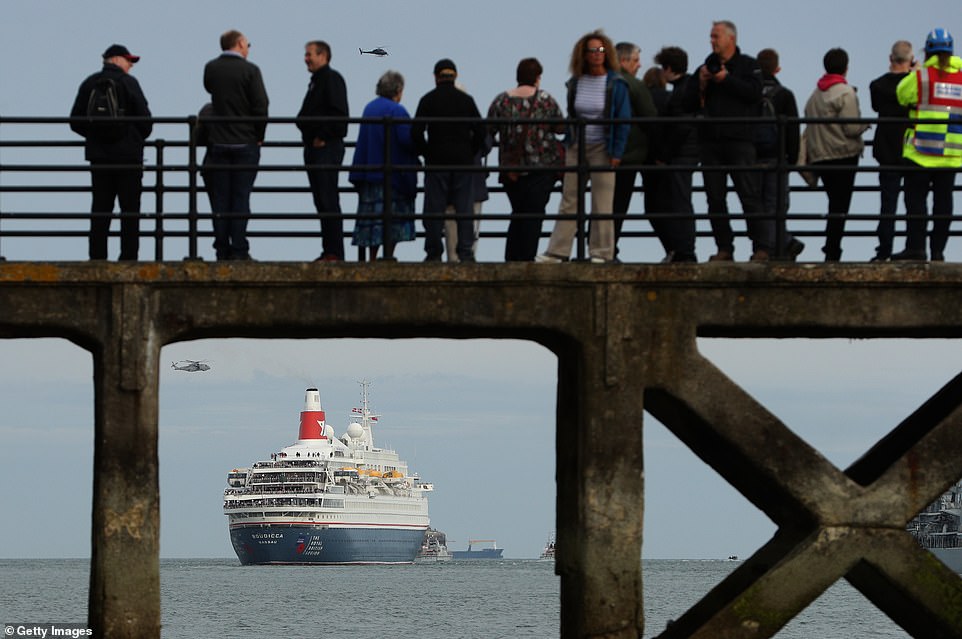 People turned out in Portsmouth today to watch the Boudicca set sail to Normandy, France, as it carried veterans on the same route they took on June 6 1944 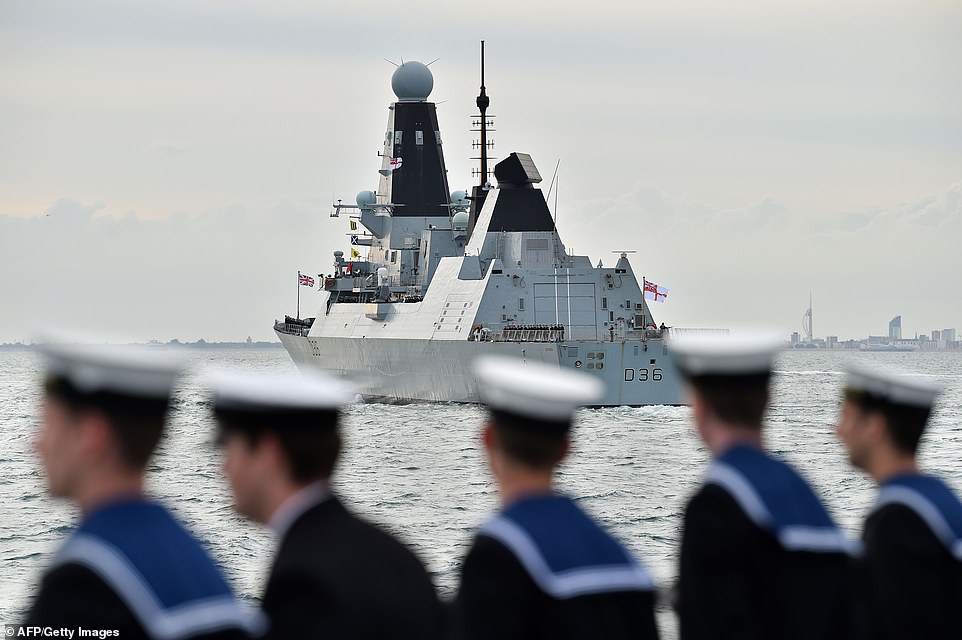 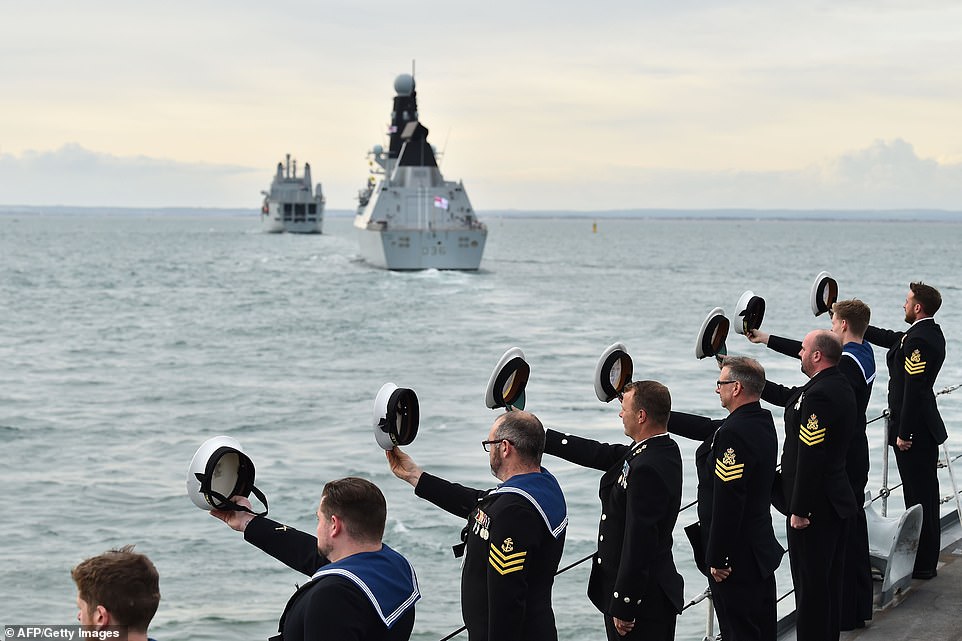 Sailors took off their hats to pay respect to the veterans as they sailed from Portsmouth, Hampshire, today to head for Normandy just as they did on June 6 in 1944 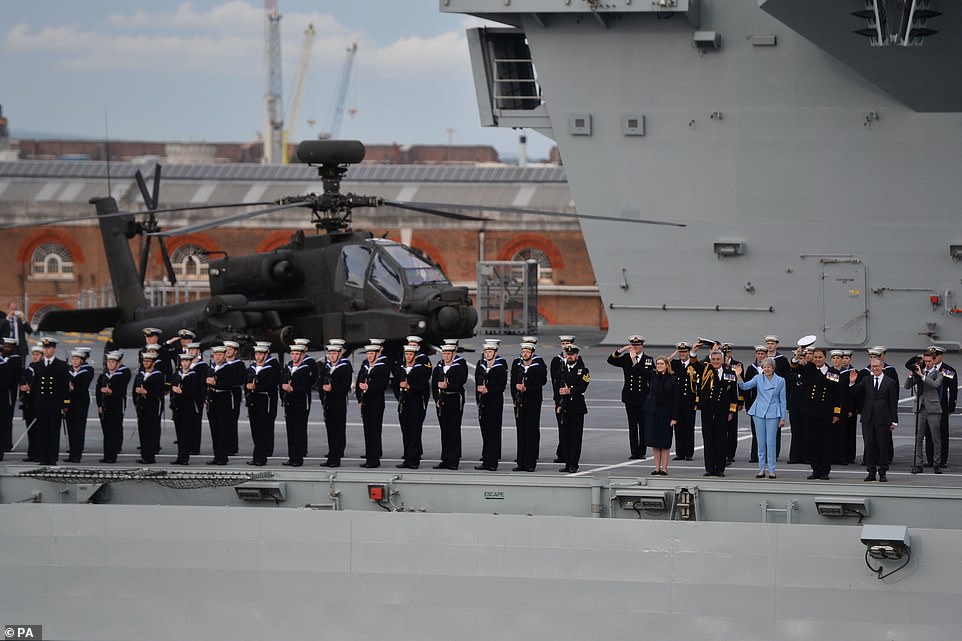 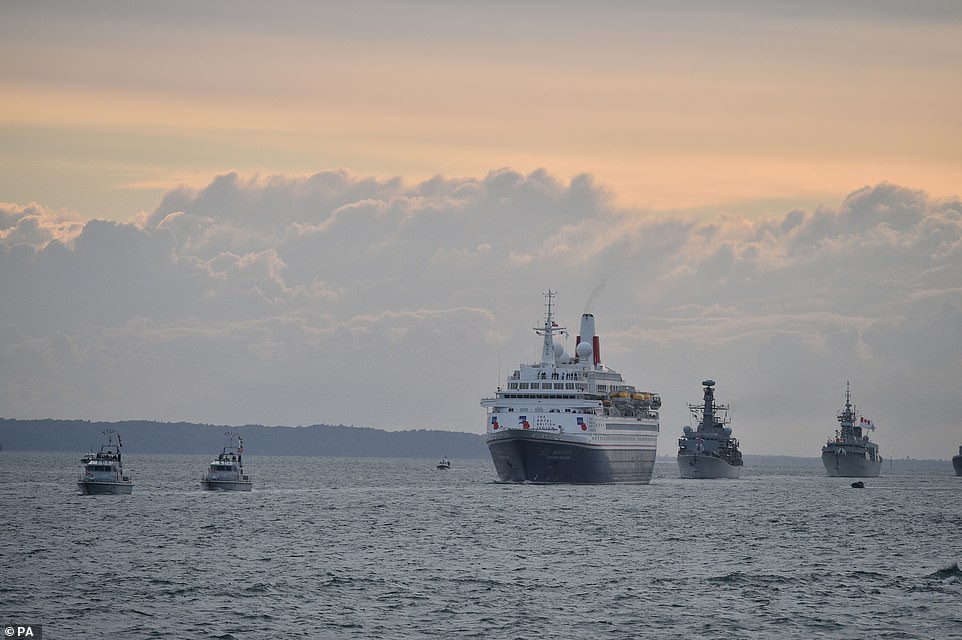