A BLAZE aboard a US Navy warship has left at least 57 people injured, with five sailors hospitalized.

The fire started on the USS Bonhomme Richard docked at the Naval Base San Diego in California while approximately 160 sailors were on board, officials said. 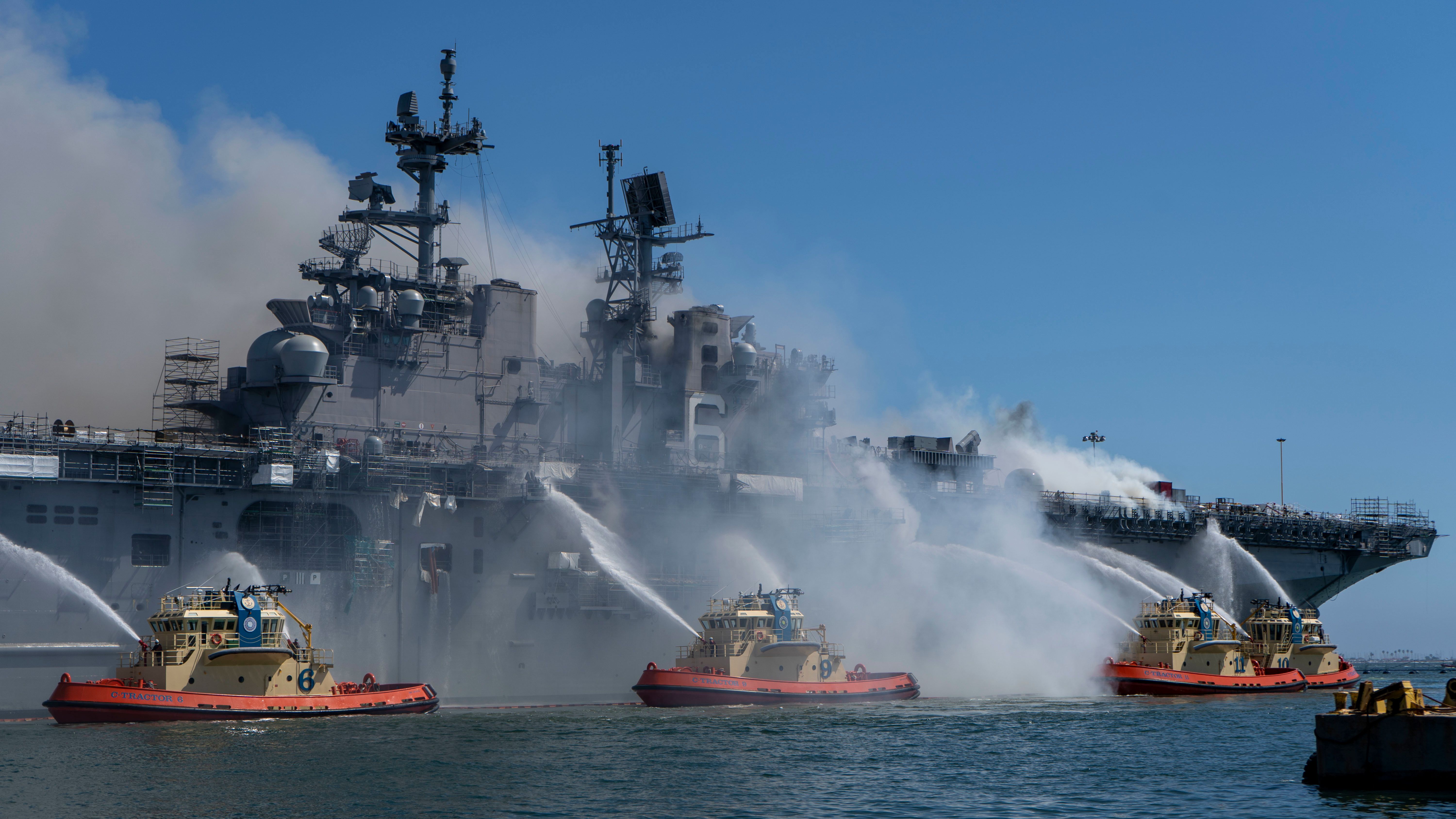 The ship was docked because it was undergoing maintenance, and Rear Admiral Philip Sobeck said the fire apparently began in a vehicle storage area on the vessel.

Officials said 17 sailors and four civilians were injured in the blaze, but by Monday, that number grew to 57 — 34 sailors and 23 civilians — with five sailors still hospitalized for observation. 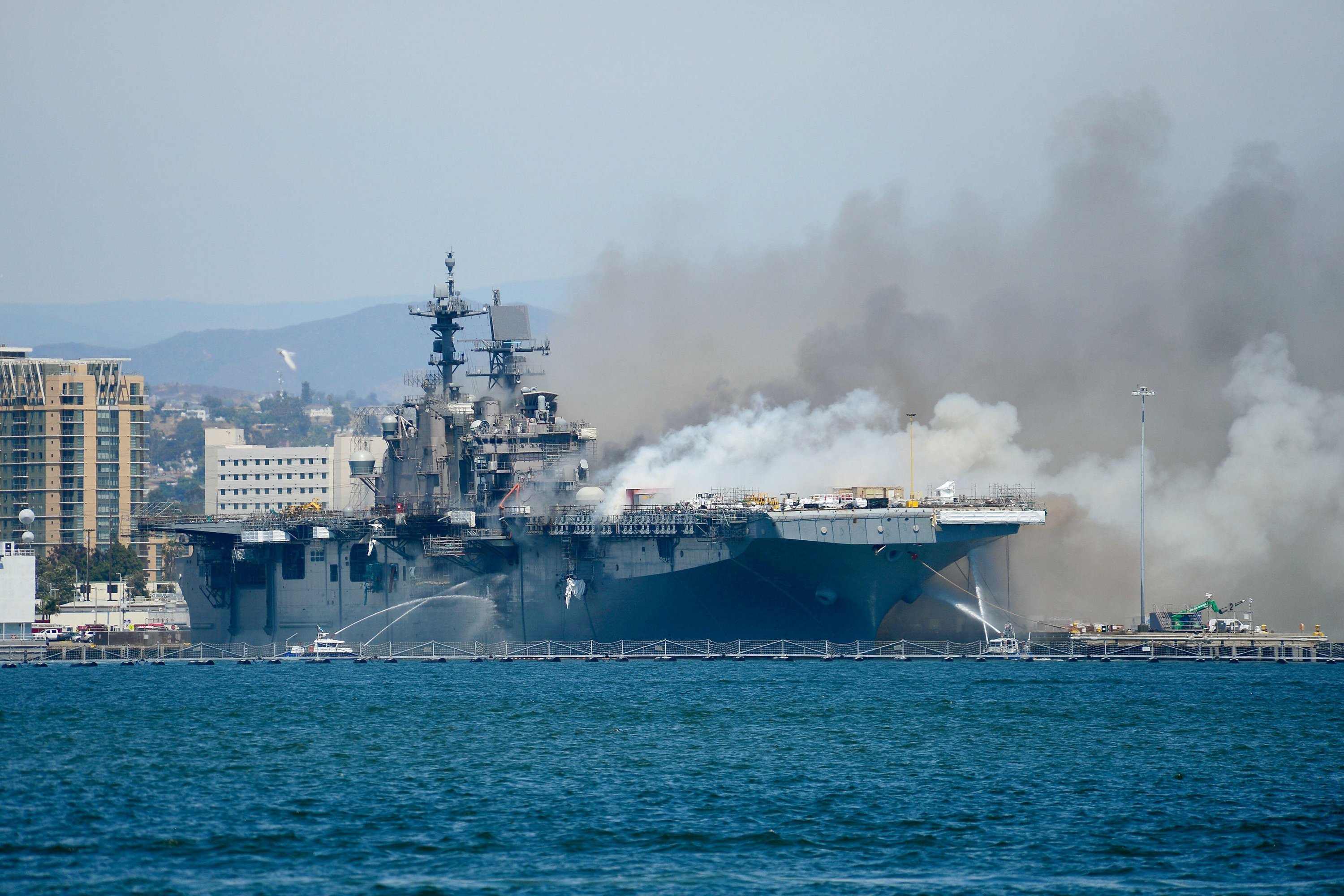 Those who were among the injured "have been treated for minor injuries including heat exhaustion and smoke inhalation."

Sobeck told reporters on Sunday: “Sailors across this waterfront are absolutely doing a magnificent job.”

Firefighters worked to put out the flames inside the ship, while firefighting vessels with water cannons directed streams of seawater into the ship and helicopters made water drops.

Sobeck said no military ordnance was on the ship, an 840-foot amphibious assault vessel, and said the boat was “well below” and heat source.

Mike Raney, a spokesperson for Naval Surface Force, US Pacific Fleet, said the 160 sailors and officers onboard is far fewer than the thousand typically on the ship when it’s on active duty.

Officials said all crew members were accounted for, and the Navy believes the fire started somewhere in a lower cargo hold area where equipment and vehicles are stored. 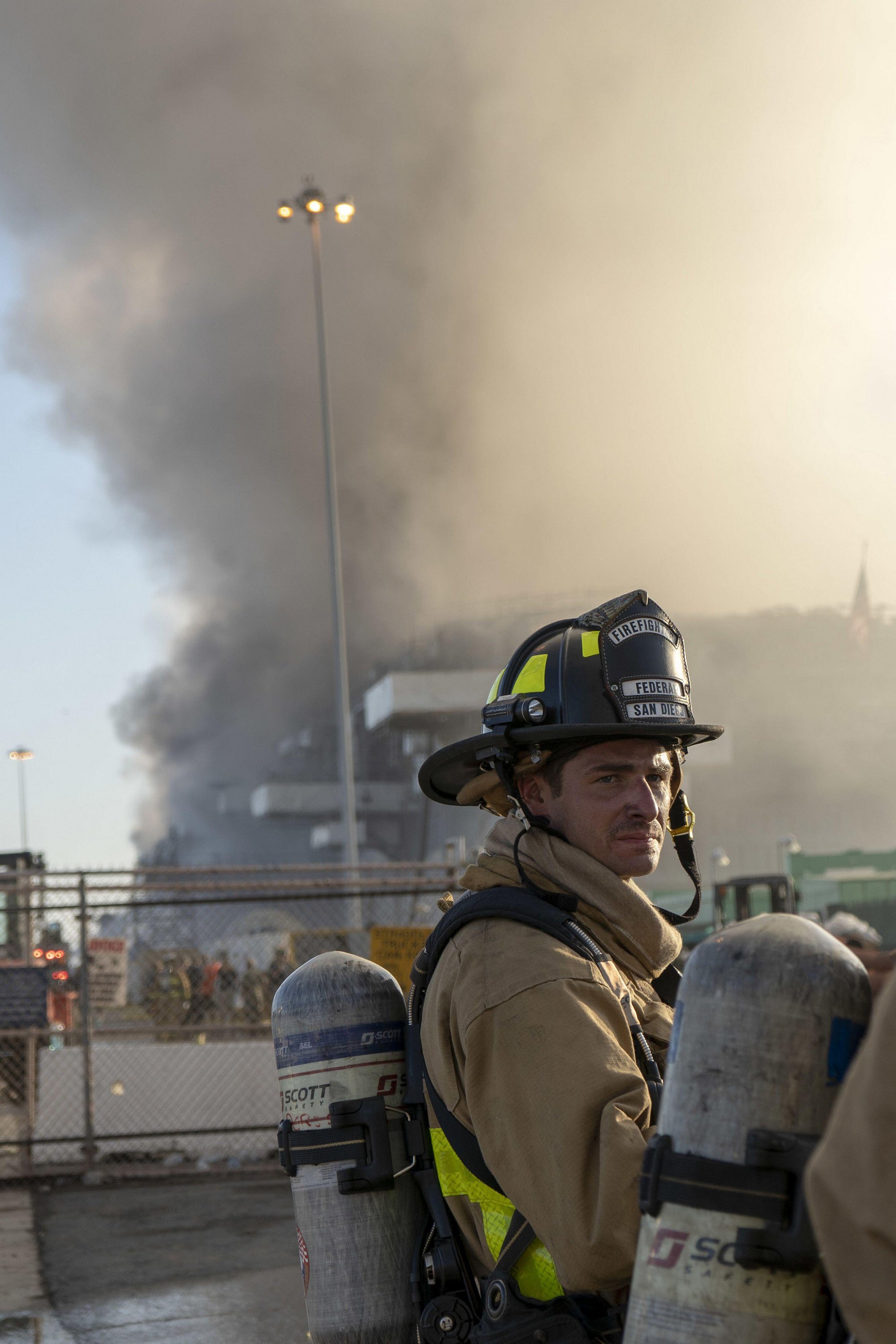 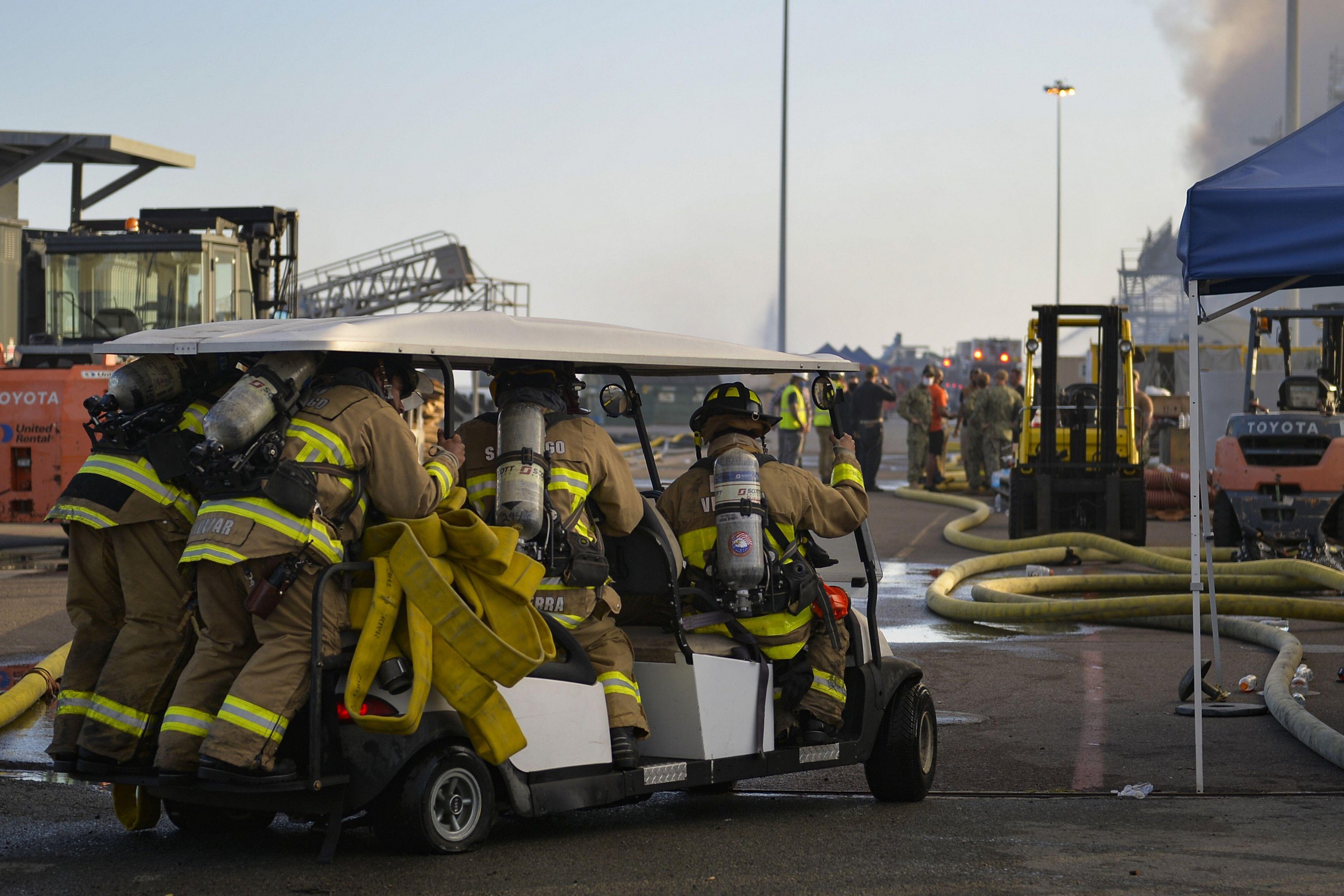 Sobeck said once the fire began, it spread up into the office and personnel areas where other items like paper and other materials fueled the flames.

“There was a report of an internal explosion,” Sobeck said. “What we cannot ascertain is exactly what the explosion was caused from.”

The 23-year-old ship has the capacity to deploy and land helicopters, certain types of short-takeoff airplanes, smaller boats, and amphibious vehicles.

Two other docked ships, USS Fitzgerald and USS Russell, were moved away from the fire, officials said.

The ship was commissioned in 1998, and is the third to have the name Bonhomme Richard. 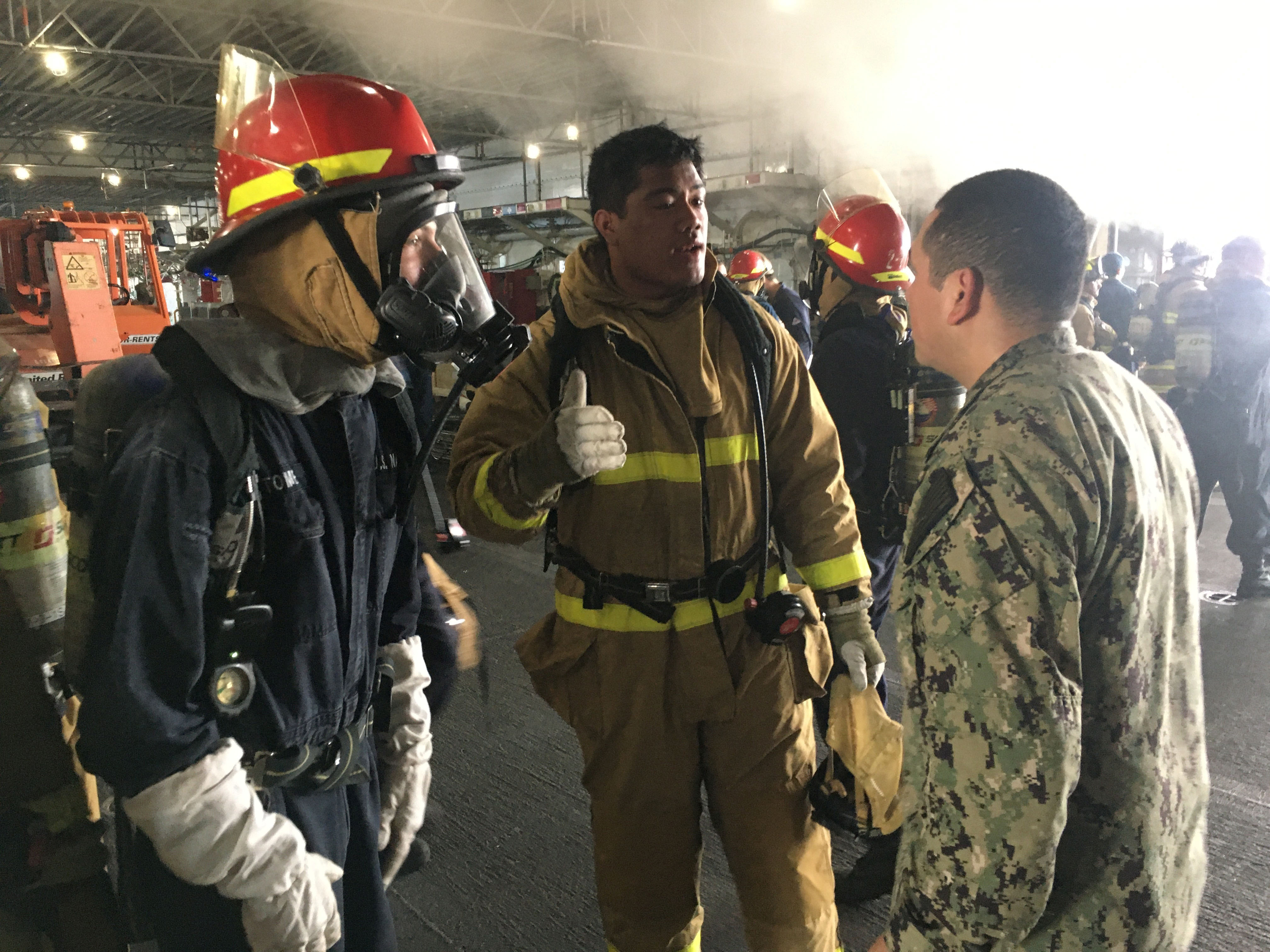 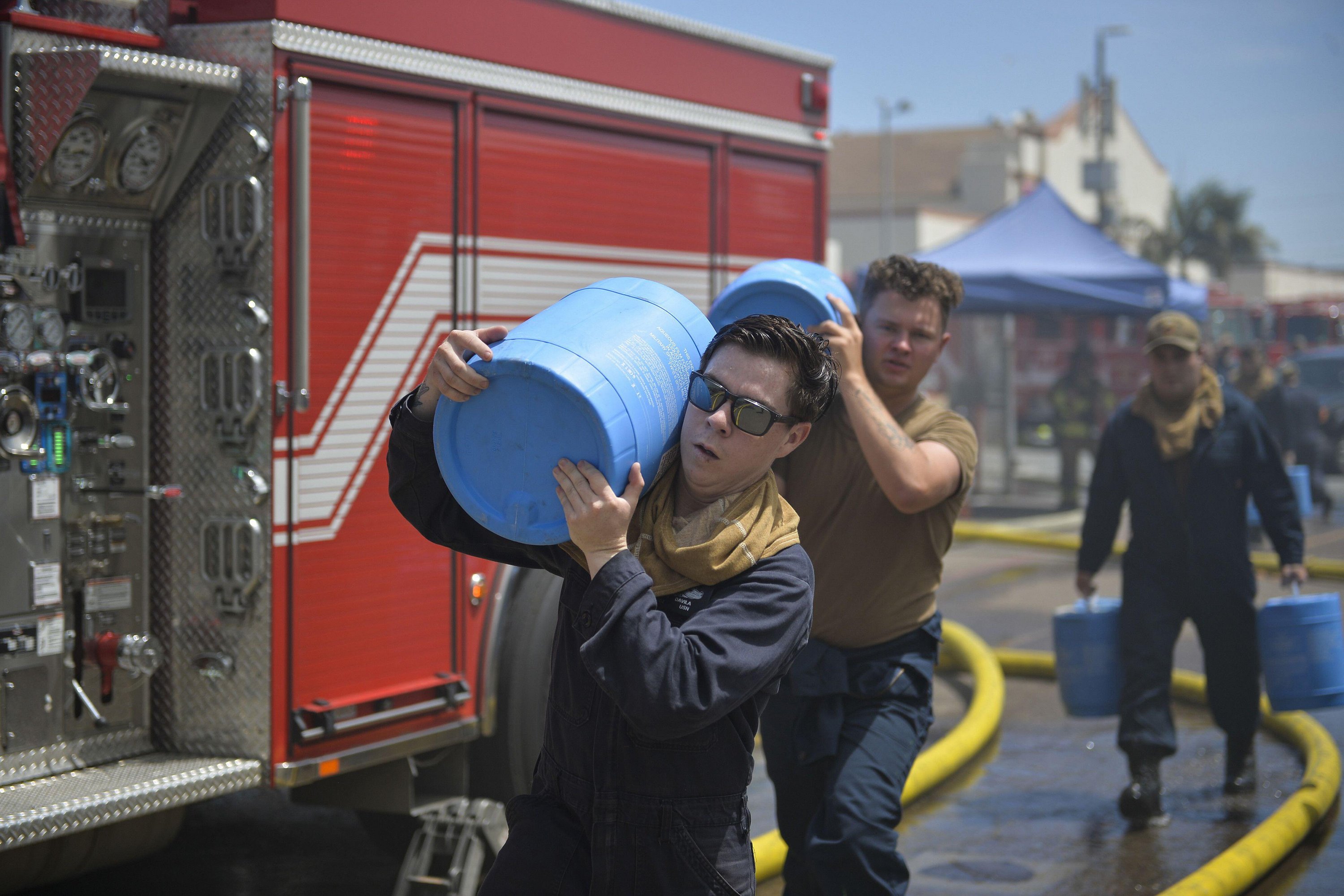 During the Revolutionary War, Captain John Paul Jones named the first ship after the French translation of the pen name Benjamin Franklin used as the author of “Poor Richard’s Almanac.”

"Right now we're going to fight the fire and then we'll work on understanding what exactly happened to make sure she sails as best as possible in a very near time."