Policies in states expected to have razor-thin margins could affect number of rejected ballots and tallying time. 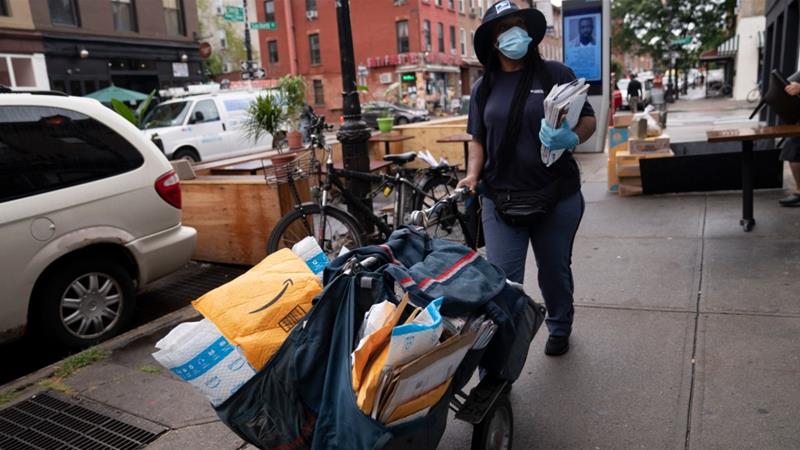 United States citizens are expected to vote on November 3 like never before, with the number of Americans casting their ballots by mail expected to surge amid the coronavirus pandemic.

While President Donald Trump has largely sought to keep attention on unfounded claims that voting by mail leads to higher rates of fraud, voting advocates have instead highlighted an array of changes to how states process votes by mail that they say could lead to fewer ballots being rejected and shorter wait times for states to reach their final counts after election day.

While analysts say there is no evidence to indicate that mail voting leads to higher rates of fraud, voting by mail does have higher rates of ballot rejection than other forms of voting.

With more than half of the electorate expected to cast ballots by mail, attention has turned to the patchwork of state policies and laws that determine the parameters for such voting, with some states quickly moving to adopt what are considered best practices for this year’s unusual election.

“It’s a completely unprecedented scale of election reform,” Charlotte Hill, a policy researcher and PhD candidate at the University of California Berkeley, told Al Jazeera. “We’ve never seen this many election laws change so quickly and so substantially in modern American history.”

Those changes are perhaps most consequential in so-called battleground states, which saw razor-thin margins of victory in 2016 and are projected to see the same in 2020.

A recent analysis of mail voting in battleground states by the Associated Press news agency found that if rejection rates for mail ballots remain the same as they did during 2020 primaries, as many as three times more voters could be disenfranchised in key states than in 2016. The AP analysed data from Arizona, Colorado, Florida, Pennsylvania, Ohio, Wisconsin and Michigan.

In 2016, Trump won the state of Michigan by just 0.3 percentage points, or 10,704 votes. In the primary in August, which saw a turnout of about 2.5 million residents, 10,694 mail votes were rejected, according to the office of Michigan Secretary of State Jocelyn Benson.

“The majority of disenfranchised voters in last week’s statewide primary could easily have had their votes counted with small changes in law,” Benson’s office said in a news release after the primary.

“With turnout and absentee ballot numbers expected to double or even triple in November, we could be looking at tens of thousands of Michigan citizens disenfranchised if the legislature again fails to act,” Benson said in a statement after the primary.

Of the rejected ballots in the state, the vast majority, 6,405, were thrown out because they arrived after election day, according to Benson’s office.

In Pennsylvania, if voter turnout is the same as 2016 and the ballot rejection rate remains the same from this year’s primary, nearly 43,000 voters in the state could be disenfranchised this fall, according to an Associated Press analysis. Trump won the state by 44,200 votes in 2016.

“In many states, the absolute latest that you could [send] your ballot in may not actually result in your ballot being counted if it gets delayed by the post office,” policy researcher Hill said, referring to an ongoing dispute between state election officials and US Postmaster General Louis DeJoy.

In August, the United States Postal Service (USPS) sent letters to a majority of US states warning, amid newly instated cost-saving measures, that it may not be able to deliver all ballots in time given states’ deadlines for requesting a mail ballot and their final voting deadline.

Lawsuits in both Wisconsin and North Carolina have sought to do away with the requirement.

Lawsuits across the country have also sought to create more reliable processes for election officials to notify – and allow adequate time for – a voter to fix a mail ballot.

While Florida and Arizona have relatively robust ballot “cure” processes, advocates have called for procedures to be strengthened in Wisconsin and Michigan, with the latter’s law saying a voter should be contacted and given the opportunity to correct if time allows, according to the National Conference of State Legislatures.

Meanwhile, in August, a federal judge ruled that residents in North Carolina must be given an opportunity to fix their ballots, while rejecting other changes sought by Democracy North Carolina and the League of Women Voters of North Carolina. A subsequent lawsuit by the North Carolina Democratic Party says the procedure for fixing ballots does not go far enough.

Advocates in Pennsylvania are currently seeking provisions that uniformly require election officials to contact voters and give them adequate opportunity to fix a signature-related issue with a ballot.

Dovetailing into concerns over giving voters the opportunity, and the time, to correct their ballots are concerns over long waits for final results as states grapple with the high rates of mail votes.

Several states, including Pennsylvania, Wisconsin, and Michigan, do not permit mail ballot processing until election day.

During its June primary, Pennsylvania saw delays amid a 17-fold increase in mail voting when compared to the 2016 general election. In June, about half of the three million voters cast their ballots by mail.

Observers fear such delays could be exacerbated in the general election, leading to a potentially fraught post-poll period, especially as some accuse Trump of already laying the groundwork to contest the results.

“Nobody in Pennsylvania wants this to be Florida in 2000. And that includes Republicans and Democrats, Independents, everybody,” Jon Delano, the political editor at Pittsburgh, Pennsylvania television station KDKA and an adjunct professor of public policy at Carnegie Mellon University, told Al Jazeera, referring to the 2000 general election, in which Florida’s problems with polling delayed final election results for more than a month.

The crunch is expected to be especially felt in states that are projected to have a huge surge in mail voting, despite having historically low mail voters in past elections.

“It’s fair to say that the most critical election of our lifetime is occurring in the middle of a pandemic, when many states like Pennsylvania are implementing brand new systems of voting,” Delano said.

“You have a cascade of circumstances that lead to great uncertainty as to how this process will work,” he added. “It could be that everything works very smoothly, but with an anticipated six to seven million voters [in Pennsylvania], there’s always plenty of room for glitches”.