Moscow: A man who participated in the Capitol riot on January 6 and is wanted by the FBI is now seeking asylum in Belarus, the country’s state media reported, presenting him as a “simple American whose shops were burned by Black Lives Matter activists.”

Evan Neumann, who appears to have sat down for an interview with Belarusian state television in a segment entitled “Goodbye, America,” on Tuesday AEDT is wanted in the United States on charges of violent entry and disorderly conduct on Capitol grounds, as well as for assaulting, resisting and obstructing law enforcement during civil disorder. 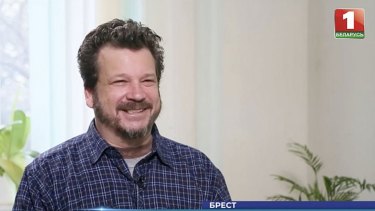 The Belarusian Foreign Ministry could not be reached for comment.

Both Belarusian President Alexander Lukashenko and his close ally Russian President Vladimir Putin have frequently referenced the Capitol riot, calling the prosecution of those involved an example of “double standards” by the United States because it frequently criticises crackdowns on anti-government protests abroad.

When mass protests broke out across Belarus last year over its presidential election, which the international community has widely denounced as rigged, thousands of demonstrators were brutally beaten by police and arrested. Many said they were tortured in prison.

Trump was impeached over the January 6, 2021 riot at Capitol Hill which he is accused of inciting.Credit:Parler via ProPublica

But Neumann could be welcomed in Belarus as part of the regime’s anti-Western propaganda. Lukashenko, who has been in power since 1994, has said last year’s opposition movement was stoked by the United States to unseat him.

In an excerpt of Neumann’s interview, the Belarusian state television presenter said Neumann “sought justice and asked uncomfortable questions” following the 2020 US. elections. The 48-year-old “lost almost everything and is being persecuted by the US government,” the presenter added.

The full interview will air on Wednesday in Belarus. In the preview, Neumann said he went into hiding once he was alerted that he would be added to the FBI’s Most Wanted list. A lawyer recommended he take a trip to Europe, he said. The state television presenter said Neumann had been living in a rented apartment in Ukraine for four months.

Neumann said Ukrainian security service agents started pursuing him, so he then crossed into Belarus by foot, through the Ukrainian swamps of Pripyat, near Chernobyl. He claimed to have encountered snakes and wild boars on the journey.

The Ukrainian border guard service said that it does not provide information on individual cases.

Belarusian border guards detained him on August 15, according to the state television report. The interview took place in the Belarusian city of Brest.