HONG KONG (Reuters) – The president of Hong Kong’s Chinese University, which anti-government protesters have turned into a fortress stockpiled with petrol bombs and bows and arrows, threatened on Friday to call in “assistance” unless all non-students leave. The hilly campus was the scene of violent clashes this week, with pro-democracy protesters hurling petrol bombs at police and on to a highway linking the largely rural New Territories with the Kowloon peninsula to the south and Hong Kong island beyond.

The Tolo highway has been partially reopened, but the Cross-Harbour Tunnel, outside the barricaded Polytechnic University where protesters have been practicing their skills with bows and arrows and petrol bombs in a half-empty swimming pool, remained closed.

Students and protesters have barricaded at least five campuses after four days of some of the worst violence in the former British colony for decades.

Chinese University president Rocky Tuan said in an open letter that all outsiders must leave.

“Universities are places to study, not to resolve political disputes, or even a battlefield to create weapons and use force,” he said.

“If the university cannot continue to fulfill its basic mission and tasks, we must seek the assistance of relevant government departments to lift the current crisis.”

Protesters paralyzed parts of Hong Kong for a fifth day on Friday, forcing schools to close and disrupting transport.

The week has also seen a marked intensification of the violence.

A 70-year-old street cleaner, who had been hit in the head by one of several bricks thrown by “masked rioters”, died on Thursday. On Monday, police blamed a “rioter” for dousing a man in petrol and setting him on fire. The victim is in critical condition.

On the same day, police shot a protester in the abdomen. He is in stable condition.

Police said the Chinese University had been “taken hostage”.

“Rioters’ violence has infiltrated into almost every corner of society and now turned the Chinese University of Hong Kong into a powder keg,” police spokesman Chief Superintendent Tse Chun-chung told a briefing.

Protesters are angry at perceived Chinese meddling in the city since it returned to Beijing rule in 1997 under a “one country, two systems” formula guaranteeing its colonial-era freedoms.

China denies interfering and has blamed Western countries for stirring up trouble.

Police have kept their distance from the campuses for more than two days, saying both sides should cool off, but many observers are afraid of what will happen if and when they move in.

China and Hong Kong both condemned an attack in London on Thursday by a “violent mob” on Hong Kong’s justice secretary, the first direct altercation between demonstrators and a government minister.

Secretary for Justice Teresa Cheng, who was in London to promote Hong Kong as a dispute resolution and deal-making hub, was targeted by a group of protesters who shouted “murderer” and “shameful”.

The Chinese Embassy in Britain said Cheng was “besieged and attacked by dozens of anti-China and pro-independence activists”.

The protests escalated in June over a now-scrapped extradition bill that would have allowed people to be sent to mainland China for trial.

They have since evolved into anti-China calls for greater democracy, among other demands. A few want independence.

The unrest has plunged Hong Kong into its biggest political crisis in decades and pose the gravest popular challenge to Chinese President Xi Jinping since he came to power in 2012. Xi said in Brazil on Thursday stopping violence was the most urgent task for Hong Kong.

The demonstrations have battered the retail and tourism sectors, with widespread disruptions across the financial center and no end in sight to the violence and vandalism.

Hong Kong sank into recession for the first time in a decade in the third quarter, government data confirmed on Friday, with its economy shrinking by 3.2% from the previous quarter on a seasonally adjusted basis. 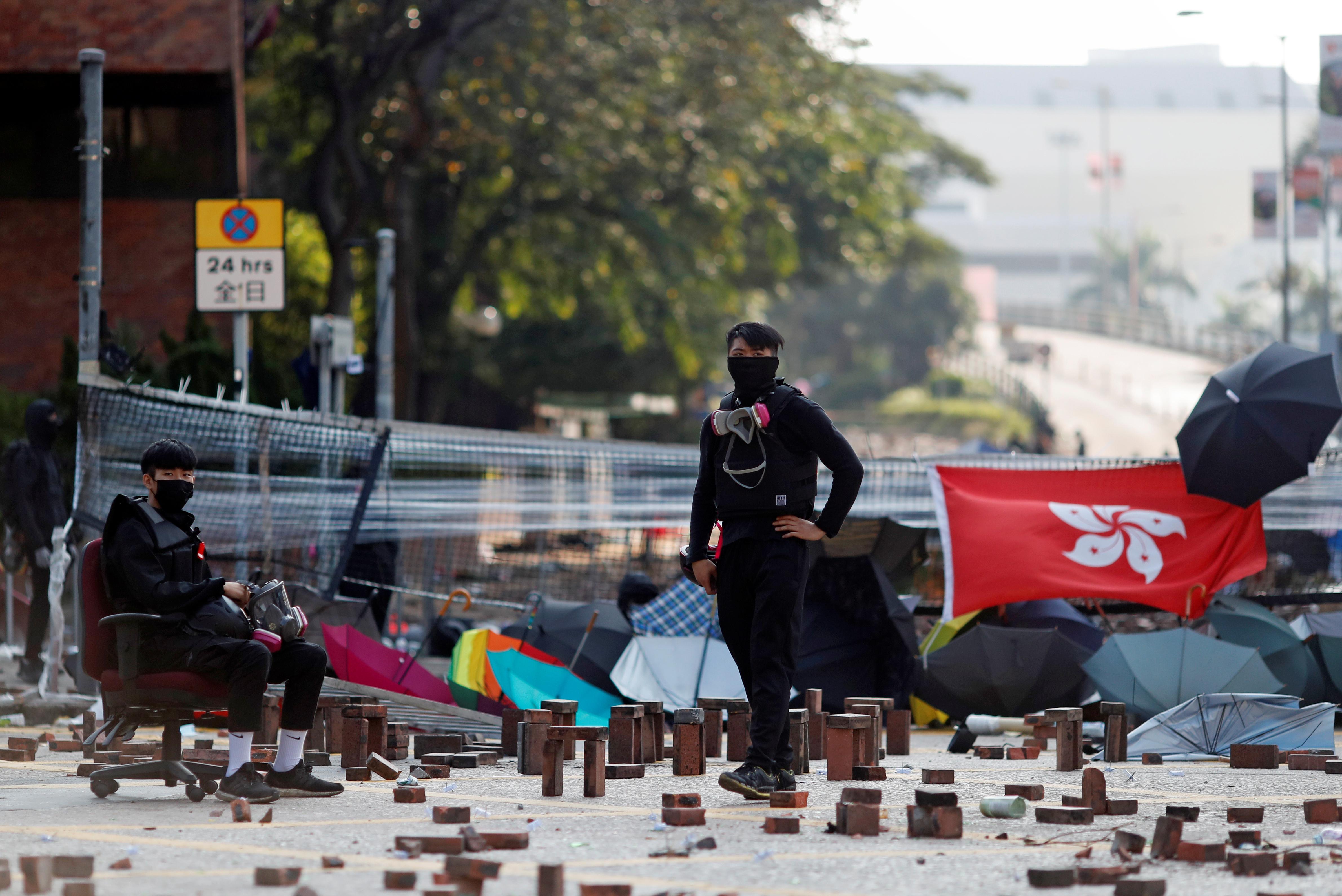 The PLA has stayed in the barracks since 1997 but China has warned that any attempt at independence will be crushed.