University students are more at risk of coronavirus in halls of residence than house-shares or on campus, figures show

Students are more at risk of catching the coronavirus in halls of residence than in private house-shares or at lecture theatres or classrooms on campus, research suggests.

Figures published today by the Office for National Statistics show that the biggest spikes in infections in Exeter and Loughborough in the second wave was seen among students in halls.

Fewer cases were traced back to student houses or to teaching facilities at the university, they showed.

And separate surveys asking students about their behaviour and mental health found that the majority of them tried to stick to social distancing rules and that over half said their mental health had got worse during the pandemic.

The research comes as hundreds of thousands of students across the UK have travelled home for Christmas following mass testing efforts to try and stop them spreading Covid-19.

Some of the highest rates of infection have been among people of university age, with people in their teens and 20s seeing around 250 positive tests per 100,000 people in the most recent week to December 13, PHE data shows.

One expert said the ONS report was ‘a powerful reminder that face-to-face teaching is not as dangerous as people originally thought’. 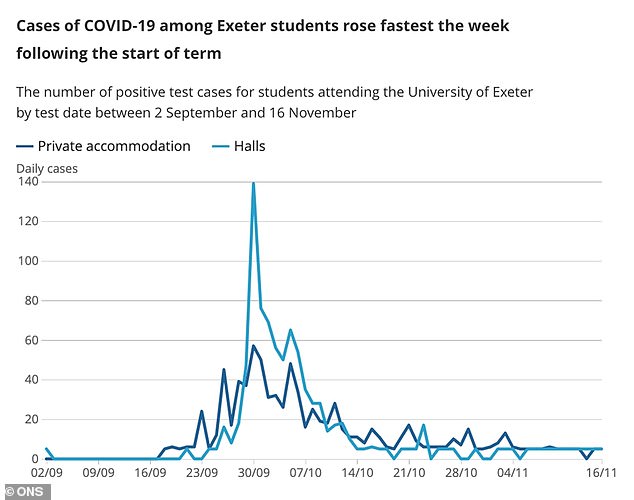 Tracking cases over the course of the second wave in Exeter, researchers found that infections reached a considerably higher peak in halls of residence than they did among private households 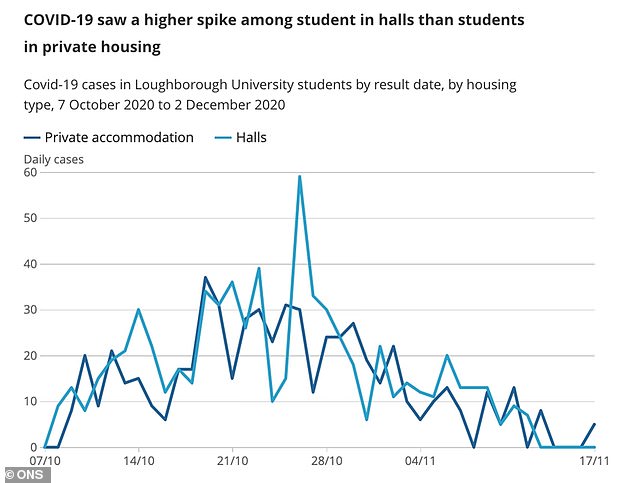 The same trend was true in Loughborough 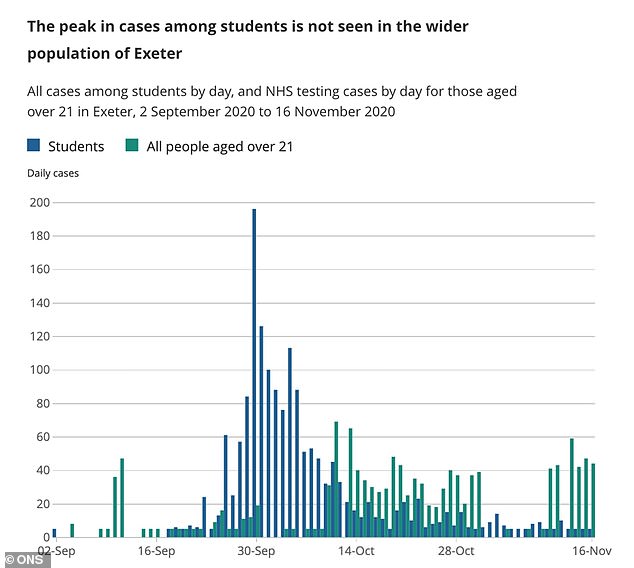 ONS data from the universities of Exeter and Loughborough suggest that the number of Covid-19 cases among the student population rose steeply after the start of the term, but they fell during November.

In Exeter, university students made up the majority of recorded cases in the area during late September and early October.

But the ONS report said there was not enough evidence to be certain whether infections spread from the wider population into the student population or whether the arrival of students had an impact on the rising levels of Covid-19 in the wider community.

Professor Julia Buckingham, president of Universities UK (UUK) and vice-chancellor of Brunel University in London, said: ‘It is reassuring to see that the new ONS report backs up universities’ own findings, showing that there is minimal evidence of Covid-19 transmission in face-to-face learning environments at universities, such as classrooms.’

She added: ‘Most universities will be continuing to provide a blended approach for students next term, with as much in-person and on-campus teaching, learning and support as possible.

‘The safety of our students and staff will continue to be our top priority and universities will of course continue to follow the latest government guidance and review their approaches based on the available evidence.’

There were fresh fears tonight that schools could be closed indefinitely as Boris Johnson refused to commit to welcoming students back at agreed times in January.

Speaking at the coronavirus press briefing, the Prime Minister said plans to reopen schools by January 11 would be kept ‘under constant review’.

Number 10 and Health Secretary Matt Hancock had until recently maintained it would be feasible to reopen with a mass testing programme for pupils, while education unions had demanded a delay of up to two weeks.

‘Obviously we want if we possibly can to get schools back in a staggered way in January in the way we have set out, but the common sense thing to do is follow the path of the pandemic and keep things under constant review,’ said Mr Johnson.

‘But it is very important to get kids and keep kids in education as much as you possibly can.’

It comes as Britain’s largest teaching union demanded classes be moved online for two weeks after Christmas to give school staff the chance to get vaccinated against Covid-19.

The National Education Union (NEU) has called on the Government to cancel face-to-face lessons for a fortnight at the beginning of the new term – with online learning to continue until January 18.

Union chiefs say the switch to online lessons, for all but vulnerable children and those of key workers, will help reduce cases amongst students.

They have also demanded that a mass-testing programme, which has already been promised by ministers, be fully functional before students return to school.

The findings have been published after university students in England were permitted to travel back to their family homes for Christmas earlier this month.

Universities have been told to stagger the return of students over five weeks in the new year to reduce the transmission of Covid-19.

Medical students and those on placements or practical courses with a need for in-person teaching in England can return to campus from January 4.

But remaining students should be offered online lessons from the start of term and should only return gradually from January 25, the guidance says.

Bringing together information gathered at a number of English universities, the ONS found the risk of transmission to be greater in households at universities.

It said there was ‘minimal evidence found of the virus being spread in face-to-face teaching settings such as classrooms and lecture theatres’.

Figures from the Student Covid Insights Survey, carried out by the ONS once in October and twice in November, suggest that students followed Covid-19 guidance in much the same way as the general public.

There were concerns that younger people were less strict about following rules and more likely to go to parties or meet up with friends, with reports of house parties and raves in the summer.

But nine out of 10 students said they always or very frequently tried to keep a two-metre distance from people outside of their university household, which the ONS said was consistent with surveys of the general population.

And students were actually more likely to have not left their home or accommodation in the week before they were questioned in November – around three in 10, compared to fewer than one in 10 of the general public.

On the findings, Nick Hillman, director of the Higher Education Policy Institute (HEPI) think tank, said: ‘It highlights the fact that most students have done their utmost to behave sensibly in line with the guidance.

‘It also serves a powerful reminder that face-to-face teaching is not as dangerous as people originally thought when due care is taken.’

More than half of students said that the pandemic had made their mental health worse.

In a survey 43 per cent described their mental health as ‘a little worse’ with another 15 per cent saying theirs was ‘much worse’.

Only 14 per cent of people said their mental health had improved.