A UNIVERSITY has been slammed for "victim blaming" students whose drinks are spiked. 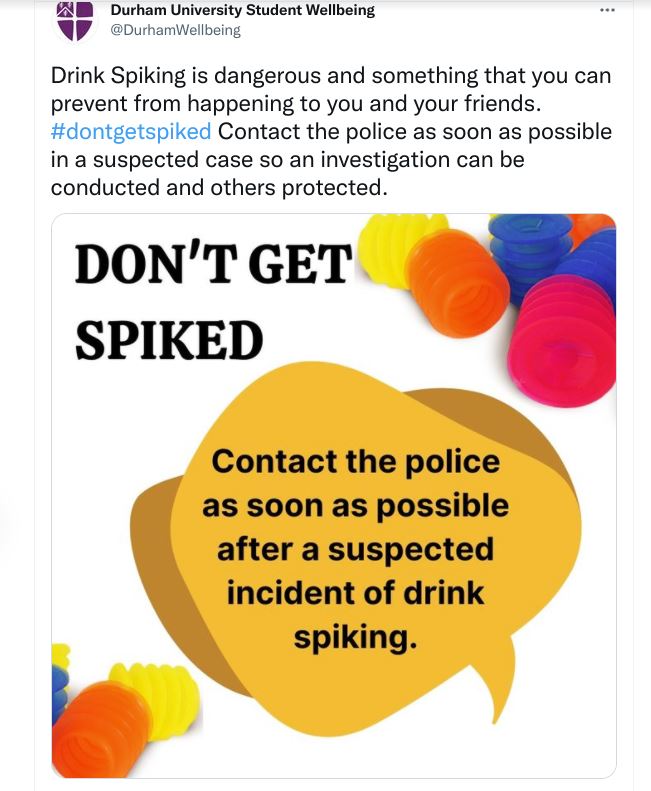 The tweet on the Durham University Student Wellbeing page warned "drink spiking is dangerous and something that you can prevent from happening to you and your friends".

It urged victims to contact police if they suspect they've been spiked and told students "don't get spiked".

But the post sparked a furious backlash on social media from students who blasted the university's "dangerous" advice.

One person wrote: "Have you tried … not getting your drink spiked” is not helpful.

"It is victim blaming and you as a university must do better."

Another posted: "This 'advice' is dangerous. For a second I really thought the University cared about combatting this type of violence.

"And it's particularly gutting because your students have been telling you this for years, and doing a lot more to actively prevent it."

And a third said: "Drink spiking can be prevented if people don’t spike drinks.

"Maybe focus on the people doing the spiking and not the victims."

A Durham University spokesman said: "We appreciate the feedback on our recent post about drink safety. Students have reported concerns to us about drink spiking on nights out.

"We take this very seriously, and work with the police and others on guidance to help people be safe and report incidents.

"We also regularly train staff and student representatives on drug and alcohol awareness.

"We always aim to support our students and take opportunities to learn and improve our messaging on important topics like this.”

The report referred to at least ten cases at two colleges and others from across the wider student body.

One student alleged they had been spiked during Castle’s Freshtival event and was taken to A&E.

Horrified parents reported their children had been mysteriously struck down on nights out in Colchester.

One mum said it was like her teenager daughter was "paralysed" when she rushed her to hospital after she was spiked.

Symptoms of drink spiking are often similar to being drunk, and can inlude slurred speech, dizziness, drowsiness, sickness, headaches, confusion and passing out.

Cornwall and Devon Police's Sgt Dave Moore told the BBC: "There's no bar staff to pour drinks, someone can go get a drink and pop something in there because there's no CCTV.

"And when someone starts to feel unwell, all the perpetrator has to do is say: 'I know them, I'll take them home.'"

The Alcohol Education Trust, which helps 11 to 25-year-olds to make safer choices around alcohol, has heard anecdotal rise of drink-spiking in places that don't have CCTV or security staff.