SAN FRANCISCO (Reuters) – A surge of about 200,000 users believed to be from Saudi Arabia who are frustrated at what they say is censorship by Twitter have helped crash the small social media network Parler, which styles itself as a “free speech-driven” space. 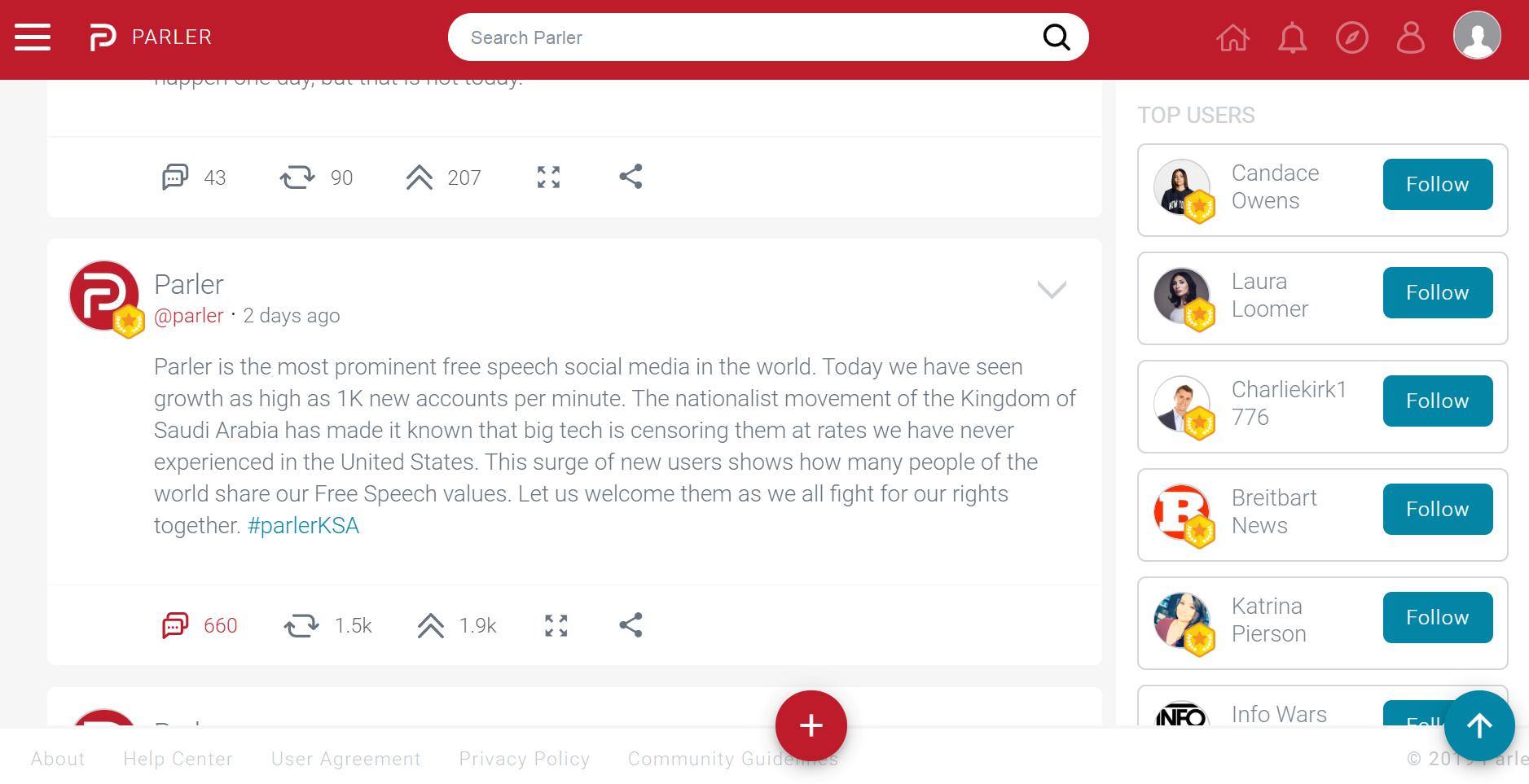 The unexpected arrival of the new accounts since Sunday more than doubled the total number of Parler users and crippled some functions, CEO and co-founder John Matze told Reuters.

The influx of users has created unusual bedfellows on Parler, which has mostly been a home for supporters of U.S. President Donald Trump after starting up a year ago.

An analysis by Reuters and Citizen Lab, a Canadian research group, found that many of the new users came from Saudi Arabia. They promoted their use of Parler with hashtags on Twitter, which they accuse of stifling expression by arbitrarily banning users.

“The nationalist movement of the Kingdom of Saudi Arabia has made it known that big tech is censoring them at rates we have never experienced in the United States,” Parler wrote in a post on its own account on the site. “Let us welcome them as we all fight for our rights together.”

Twitter declined to comment on whether the platform had taken any new action against Saudi accounts that could have triggered the sudden sign-ups on Parler. It was not clear how many of the new Parler users had stopped using Twitter.

Some of the new Parler accounts used the hashtag #Twexit or shared cartoons of blue birds in distress, using Twitter’s logo to suggest the platform’s decline. Other users tweeted threats to leave Twitter directly at chief executive Jack Dorsey.

Saudis are prolific users of social networks, particularly Twitter. The kingdom has Twitter’s largest user base in the Middle East, with 11.7 million people on the platform, according to Arabic social media monitoring firm Crowd Analyzer.

“It is great to be here guys. Twitter and other major platforms are not our place anymore. Everyday[sic] hundreds of #Saudi accounts are suspended for NO reason,” a user called @5a1di, who has 109,000 followers on Twitter, posted on Parler.

Twitter has previously acknowledged pulling down hundreds of “inauthentic” accounts that pushed talking points favorable to the Saudi government, which has built an “electronic army” tasked with furthering its agenda online. [nL8N1XA87R][nL8N1X2266]

Matze, who describes himself as libertarian, says he founded Parler in 2018 as a bipartisan platform but has doubled down on marketing to conservatives as they took to the site.

Those who have joined include commentator Candace Owens, Trump lawyer Rudy Giuliani and right-wing activist Laura Loomer, who handcuffed herself to the door of Twitter’s New York office in Nov. 2018 to protest a ban on her by the site.

Some Saudi users emphasized common ground with Trump supporters. They shared photos of Trump with members of the Saudi royal family and used emojis of the two countries’ flags and Trump’s #MAGA hashtag.

Offline, the Trump administration has forged strong ties with Riyadh, which it regards as the cornerstone of U.S. security policy in the Gulf. Trump made Saudi Arabia his first stop abroad as president in 2017.

But the Saudi newcomers on Parler were met with mixed reactions from users, with some echoing the site’s welcome while others expressing anti-Muslim sentiments.

The Reuters-Citizen Lab analysis looked at 28,000 tweets under the hashtags #parler, #parlerksa – using an acronym for the Kingdom of Saudi Arabia – and an Arabic-language version of #parler sent out between last Friday and Tuesday.

More than half of the tweeters using those hashtags had their language set to Arabic. Of those who reported their location, about a third said they were in Saudi Arabia.

One of the earliest Arabic-language tweeters to jump on the #parler hashtag, who goes by @NadiaBintFahad, warned on Friday: “Twitter management will be taught a lesson they won’t forget.”

Speaking by phone from Riyadh, Nadia, who declined to give her last name, told Reuters she was a 28-year-old woman who had studied in Australia. She said she heard about Parler from American figures on Twitter and had watched an interview Matze did with the conservative Blaze TV.

She does not know much about U.S. politics, she said, but expressed support for Trump and frustration with Twitter for banning Saudi users without explanation.

Many English-speaking Parler users called for a translate button so they could read the new content on the site. Others expressed doubts about the newcomers’ authenticity.

“GET RID OF THESE BOTS AND MAKE THIS SITE USABLE AGAIN THANKS,” posted user @Voisine, referring to automated accounts.

Matze, who denied there were automated accounts on the platform, called it an “interesting merging” of the two groups.

“Most of them are getting along very well and share common ground on many issues,” he said. “Some are quickly regretting their views on free speech.”