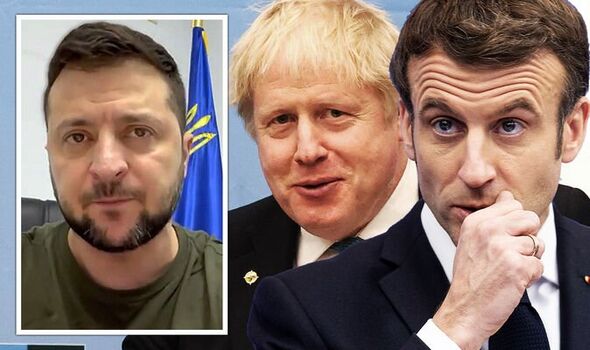 As the Russian invasion of Ukraine enters its second month, the French President again rejected President Zelensky’s calls for weapons such as tanks. Reflecting on France’s reluctance to help, Mr Zelensky told the Economist: “[It is] because they are afraid of Russia. And that’s it. And those who say it first are the first to be afraid.” The criticism comes as Ukraine hits a key turning point in peace negotiations with Russia, with Kyiv ready to discuss security guarantees, neutrality and non-nuclear status. Mr Zelensky added: “To be honest, Johnson is a leader who is helping more. The leaders of countries react according to how their constituents act. In this case, Johnson is an example.”

US President Joe Biden has said he was not calling for regime change in Russia when he said on Saturday that President Vladimir Putin “cannot remain in power”.

The President was pressed on the issue by a reporter outside a church in Washington DC.

Asked whether he was calling for a regime change, Mr Biden replied: “No.”

Boris Johnson is ‘helping more than other leaders,’ says Zelensky

Asked about Mr Johnson’s willingness to provide weapons to Ukraine as it comes under attack from Russian forces, President Zelensky said London’s response stood above much of Europe.

He told the Economist: “Yes. To be honest, Johnson is a leader who is helping more.

“The leaders of countries react according to how their constituents act. In this case, Johnson is an example.”

He continued: “Britain is definitely on our side. It is not performing a balancing act. Britain sees no alternative for the way out of the situation.

“Britain wants Ukraine to win and Russia to lose, but I’m not ready to say whether Britain wants the war to drag on or not.”

Russia putting ‘hundreds of millions’ at risk of nuclear horror

Russia’s “irresponsible” actions at the Chernobyl nuclear power station in Ukraine are putting “hundreds of millions” at risk, according to Ukraine’s deputy Prime Minister.

Chernobyl was the site of the world’s worst nuclear accident in 1986 and is currently under the control of Russian forces.

Ukrainian deputy Prime Minister Iryna Vereshchuk accused Russian forces of “militarising” the site and storing a large amount of ammunition “in close proximity” to the station.

She said: “It should be noted that recently Russian occupation troops have been using old and unconditional ammunition more often, which increases the risk of their detonation even when loading and transporting,” she said.

“In the context of nuclear safety, the irresponsible and unprofessional actions of Russian servicemen present a very serious threat not only to Ukraine but to hundreds of millions of Europeans.”

‘This is the most important point,’ says Zelensky as peace negotiations progress

Ukrainian President Volodymyr Zelensky has described the current stage of peace negotiations as “the most important point” in the bid for resolution.

Speaking to Russian media, President Zelensky said: “Security guarantees and neutrality, non-nuclear status of our state. We are ready to go for it. This is the most important point.”

But Mr Zelensky said Ukraine refused to discuss certain other Russian demands, such as the demilitarisation of the country.

Good morning from London. I’m Tara Fair, I’ll be bringing you all the latest developments on the war between Ukraine and Russia. Please feel free to get in touch with me as I work if you have a story or tips to share! Your thoughts are always welcome.