Heavy rainfall fell across parts of Britain for hours on Monday accompanied by thunderstorms and lightning strikes. The Met Office issued an amber ‘danger to life’ weather warning for southeast England from 3pm onwards, upgrading it from an earlier yellow warning. Unfortunately, the bad news is that the torrential downpours are set to last for days, although not everyone will be affected. Met Office meteorologist Luke Miall said Tuesday morning would see a north-south split with the rain continuing to batter the south while Scotland and Northern Ireland enjoy drier spells.

He said: “For England and Wales it is a wet old picture to start the day with lots of heavy rain around.

“Yes, we’ve got yellow warnings in force. Some of the worst of the rain is cleared from the southeast after what was a very wet night but we will see further showers developing here.

“And already you can see by mid-morning they’re pushing their way up from the southeast and they’ll continue to develop through the day.”

Pointing to northern England on the map, the weather forecaster added: “It is this zone really that we’ve got to watch out for because that’s where we’ve got the heavy and persistent rain just lasting right the way through the day so we could see further issues with flooding here and also some transport disruption.” 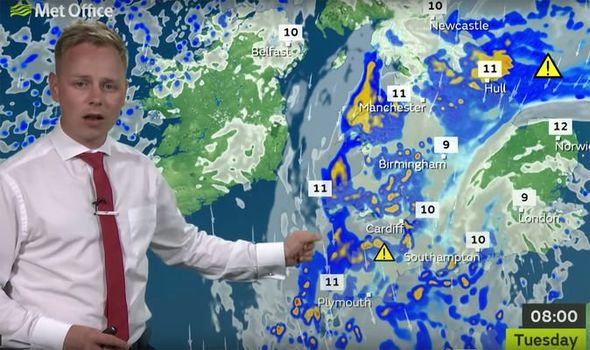 Despite the downpours, temperatures will be warmer than on Monday with predicted highs of 19C in the southeast of England and even highs of 15C in Glasgow and Belfast.

Scotland and Northern Ireland will stay dry so will feel especially warm in the sunshine.

The Met Office has issued yellow weather warnings for Tuesday, Wednesday and Thursday.

Earlier today, it warned homes and businesses were “likely to be flooded” in the downpours across Kent, Essex and the Home Counties. 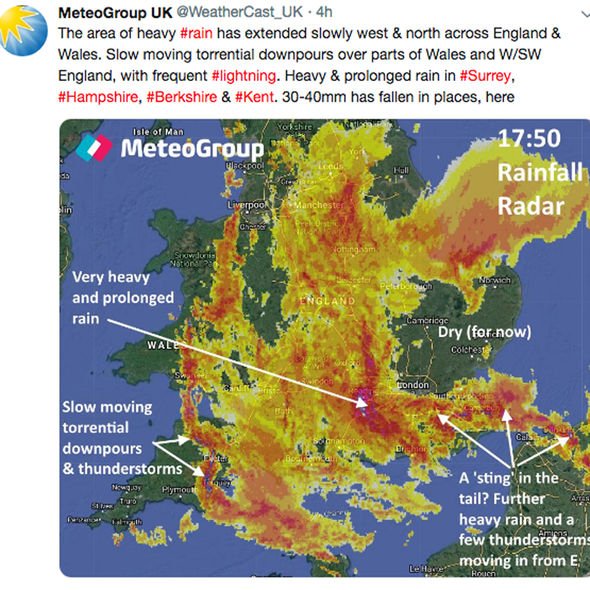 The wet weather is being blamed on hot air from central Europe colliding with a low-pressure system further south of the UK.

A new frontal zone pushing up onto our shores Wednesday will cause a new band of rain to arrive.

Steve Ramsdale, Duty Chief Meteorologist for the Met Office, warned people to be prepared for flooding and disruption to travel journeys throughout this week.

He said: “The development of weather conditions leading to thunderstorms and intense rainfall can happen extremely quickly, creating a challenge for forecasters. 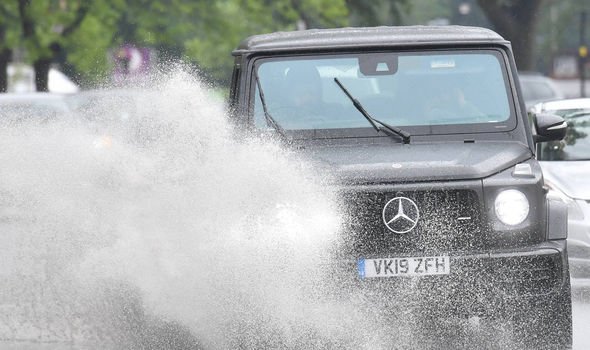 “We have been able to indicate the likelihood of further spells of heavy rainfall for the rest of the week, but the exact details will remain uncertain until nearer the events.”

Drier weather will arrive for Friday but the Met Office says the showers may return at the weekend along with spells of sunshine.

The current forecast for the weekend states: “There is a risk of heavy, thundery showers in the east or southeast at first.

“Thereafter, showers are likely to be heaviest in the west where they may merge to form longer spells of rain or give a rumble of thunder.

“Winds may be strong in the west with the risk of coastal gales.”