Government advisories are likely amid warnings explosive thunderstorms, gales, torrential rain and flooding will unleash a week of hell. A plume of deeply unstable, moisture-laden air will sweep in from Spain and France on Tuesday evening kick-starting the turbulent weather. Brutal storms, wind and rain will be driven by a perfect storm of low-pressure, jet-stream activity and warm air, according to the Met Office.

Meteorologist Helen Roberts said: “Low pressure and high temperatures across the near Continent will lead to some very unstable air will at times pushing either into the UK or at least very close to us, particularly across eastern parts of the country.

“There are three things going on which will affect our weather this week, the jet stream is very far to the north of the UK and allowing the unstable air up from the Continent and we have low pressure generally in charge.

“There will be some pretty heavy and thundery downpours at times through the week, and we are almost certainly going to issue a warning for rain.

“There could be a plume of warmer air associated with another low pressure system due to arrive on Friday, however temperatures will be subdued with the cloud cover, but it will be quite humid.”

The weather will take a turn for the worse on Friday when a cyclonic low-pressure system charges in from the Continent.

Swathes of the country are on alert for heavy rain and gales through the night and into the start of the weekend. 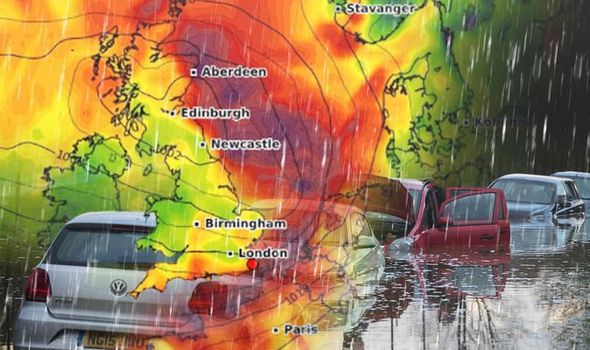 In a near carbon-copy assault, another low will pulverise the nation on Sunday night with further warnings for strong winds and heavy rain through the start of next week.

Miss Roberts said: “On Friday and into Saturday there is an area of low pressure pushing northwards from the Continent and it is going to spread heavy rain across southern areas before moving north later on Friday.

“Into Saturday this starts to become convective bringing further heavy rain and strong winds, there is s risk of gales around the coasts, this is a particularly unsettles spell of weather and, again, this could be warning territory.

“Another low pushes northwards later on Sunday and it could bring a repeat of what wi will have seen earlier in the weekend.

“Again this is coming in off the Continent.”

Torrential downpours on dry ground will put parts of the country on flood alert with some regions facing inches of rain in a matter of hours. 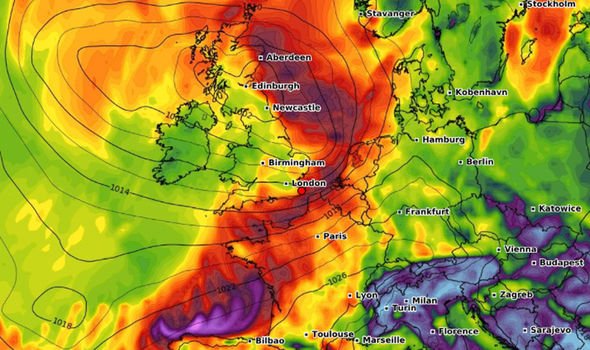 Weather charts show winds of up to 100km/h sweeping up from Europe and tearing up the east coast of Britain on Friday night.

Just days after the nation bathed in golden sunshine and temperatures nudging 30C (86F), forecasters paint a very different picture for the weekend.

Wind and rain will plague the country through the rest of this week and this weekend, according to the Weather Company.

A meteorologist for the firm said: “Low pressure will dominate the weather pattern through the remainder of the week and into the weekend resulting in cool and unsettled conditions.

“There will be spells of rain and showers and these will be heavy at times with the risk of thunder but there will be some drier and brighter interludes at times. 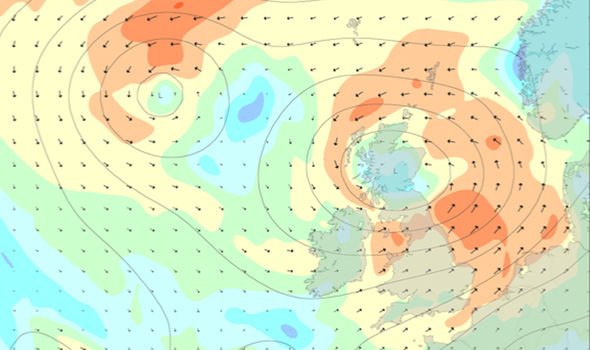 “Moderate to heavy rain is expected to end the week on Friday and there will be a risk of localised flooding across the south and further flooding risks expected across the west on Sunday.”

While most of Britain will see rain this week, there will be some decent periods of sunshine when the clouds part.

However temperatures will nosedive overnight with even the risk of a late frost in some regions, according to Weathertrending’s John Hammond.

He said: “There will be spells of rain for just about all of us through the week, some of this rain will be heavy and thundery.

“That’s welcome rain of course for those of us who desperately need it. “There will still be some sunshine and where the winds are light it will feel pleasant enough with that strong, June sun.

“But overnight there the potential for some very daily nights, in fact I won’t rule out some frosts in some places, that’s one to watch. 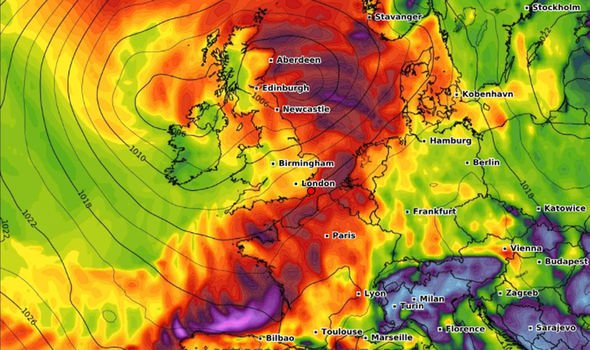 “So there will be some rain, sone shine but pretty cool for all.”

Met Office meteorologist Clare Nasir added: “There is a lot of rain in the forecast through the next few days and the risk of thunder.

“As we head through Tuesday evening there will be some showers towards the west but it will be a clearer night but towards the north that’s where the rain is.

“Temperatures will take a bit of a tumble with a bit of a cool start to the middle part of the week.

“All in all the weather remains unsettled with rain or showers every day and the risk of thunder particularly towards the south.”