Britain CRACKS in the heat! Aldi rations bottled water, officials shut children’s beach because the sand is too HOT and farmers smear sun cream on their prized PIGS at country show… as mercury hits 32C and is still rising

Record-breaking temperatures are already causing chaos across the country today, with trains grinding to a halt and thousands facing an unbearably sticky morning commute.

But the scorching temperatures have also led to a range of other more unusual outcomes, from a beach being closed because the sand is too hot, to school detentions being cancelled and farmers smearing suncream on their prized pigs.

Detentions have been cancelled at one school, while discount chain Aldi has begun rationing bottles of water at a supermarket in south London – with customers limited to one bottle of still or sparkling per person.

The Met Office has warned that temperatures could rise even further to 43C (109F) tomorrow. Temperatures had already hit 32C (90F) in Cambridge and West London by 11am today.

Pigs are being covered in suncream to protect them at one of Britain’s biggest country shows.

Farmers are using the suncream to protect the animals’ sensitive skin in the blistering heat at the Royal Welsh Show. 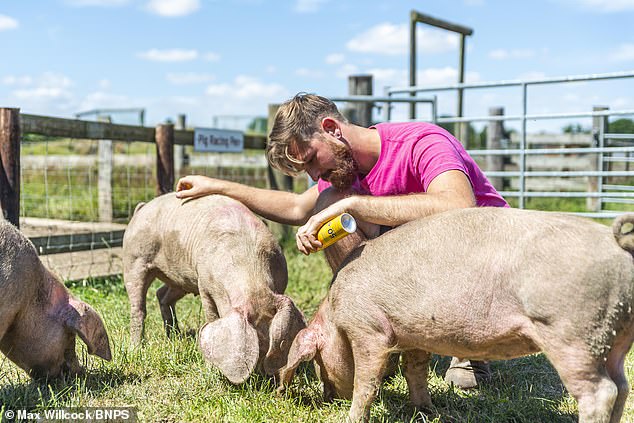 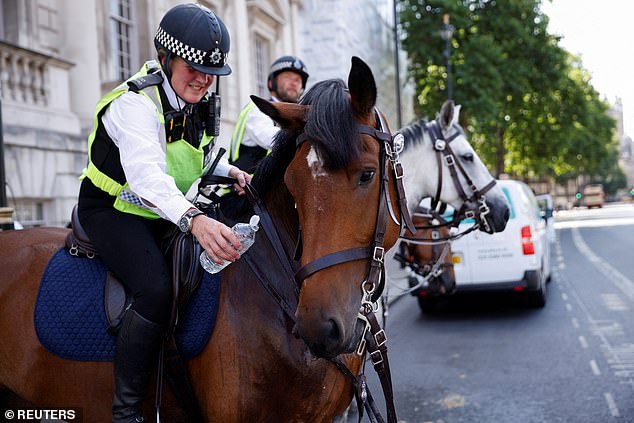 A police officer offers a bottle of water to a police horse named Zack during hot weather, on Whitehall in London

‘Pigs don’t let out the heat as well as other animals so it is difficult to keep them cool,’ said Ela, 45, of Pwllheli in Gwynedd.

‘We put cold wet towels over them but we need to be careful that the heat doesn’t dry the towels too quickly so it can reheat them.

More than 50,000 people are expected every day at the four-day Royal Welsh Show – one of Europe’s biggest agricultural events – and organisers have been told by public health bodies to prepare for the extreme heat.

The Royal Welsh’s chief vet Dafydd Jones admitted the forecast for the show near Builth Wells in Powys was ‘worrying’.

‘Animals suffer like people – if not worse – in extreme heat and with so many animals there, it is very worrying that animals will find it difficult to cope with the heat,’ he said.

Organisers have spent more than £50,000 on extra fans and ventilation in livestock sheds to keep the approximate 8,000 animals as cool as possible while extra water will be available.

Meanwhile, on Whitehall in London, Zack the horse was offered a bottle of water by his caring police handler.

‘Beach’ closes because the sand will be ‘too hot for children’

A beach is closing today because the sand will be ‘too hot for kids to play on’.

Deputy city mayor Cllr Piara Singh Clair said: ‘In these extreme temperatures, the sand on our beach would be far too hot for children to play in. 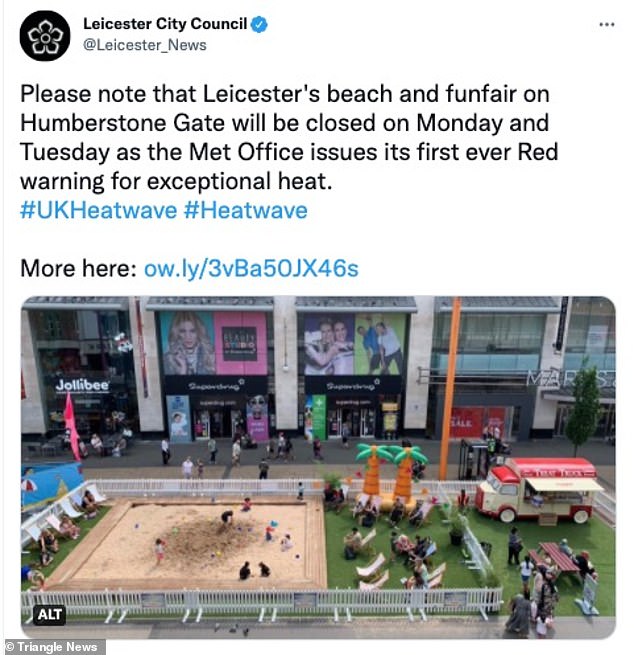 ‘And there’s also a risk that the funfair rides’ generators would overheat.

‘In the interests of our customers’ wellbeing, and the safety of our staff, we have decided to close these attractions on Monday and Tuesday.

‘While this extreme weather continues, we would advise people to seek out the shade – and, weather permitting, we hope to reopen the City Beach and the funfair on Wednesday.’ 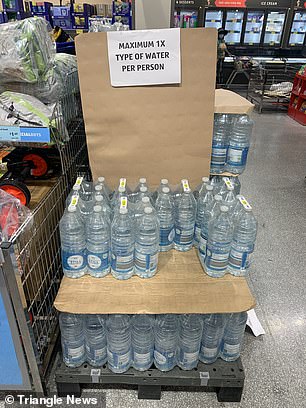 Aldi is rationing water – limiting customers to one type of bottled water per person.

A sign warning shoppers was spotted at the Streatham store in South London over the weekend.

It read: ‘Maximum 1x type of water per person.’

In B&M, a video showed chocolate bars melting on shelves.

And shoppers have been asked to ensure they wear t-shirts and tops when heading to the supermarket and the pub.

Meanwhile, Iceland invited customers to chill out in its freezer aisles amid the heatwave.

Saved by the heatwave! Detentions are CANCELLED at secondary school

Schools are cancelling detentions and sports days because of the heatwave.

Northwood Community Primary School in Kirkby, Merseyside said that sports day had been cancelled on Monday, although ‘children can still attend school in their PE kits until the end of term’.

And King Charles I School, a secondary school in Worcestershire, has cancelled all on-site detentions on Monday and Tuesday.

‘Please note that detentions will be cancelled on Borrington and Hillgrove sites today and tomorrow,’ the school tweeted.

The school was originally founded in 1566 and is the only one in England to bear the name of the executed king. 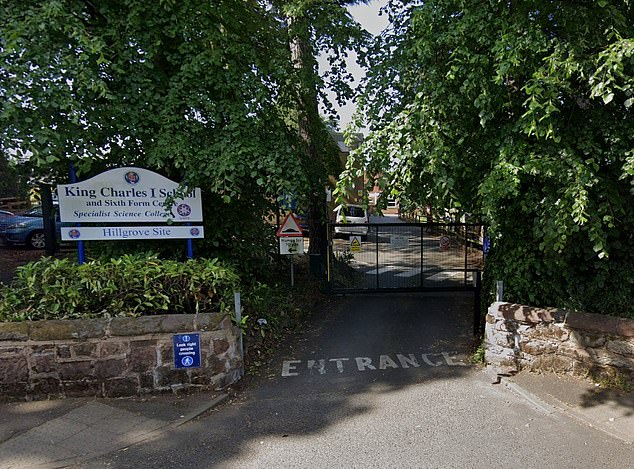 King Charles I School, a secondary school in Worcestershire, has cancelled all on-site detentions on Monday and Tuesday

Watering the… guards? Queen’s Guard soldier is kept hydrated while on duty outside Buckingham Palace in full military uniform

While some schools have closed and rail services have been delayed by the hot weather, one group not budging an inch are the Queen’s Guard.

Despite the roasting heat, the troops today remain in full military uniform, including their thick bearskin caps, outside Buckingham Palace today.

But the guards, who are very limited in when and how they can move during their two hour stints, are being kept hydrated.

Pictures show a security officer providing water to one of the soldiers today – with temperatures now above 30C in London. 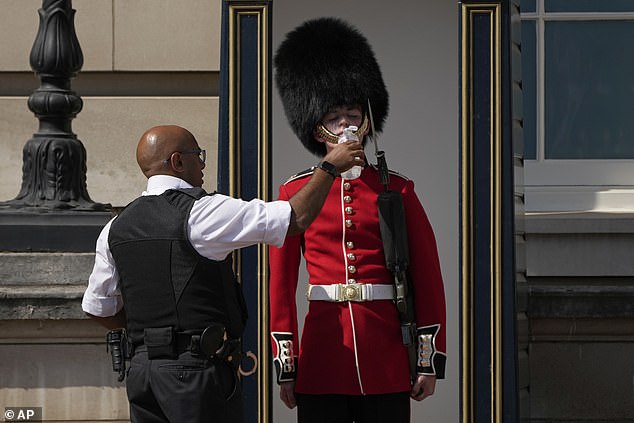