The UK has started withdrawing diplomats and their families from Ukraine due to fears that Russia could invade.

Half of diplomatic staff and their families stationed at the UK’s outpost in Kiev will now leave the country, sources told the BBC.

The move is not due to any specific threat against Britons, the sources added, but is due to the growing risk of a Russian attack on the former Soviet state.

It comes after the US ordered families of American diplomats out of the country for the same reason, and offered non-essential embassy staff flights home.

The EU said today that it has no plans to withdraw its diplomatic staff from Ukraine, with top diplomat Josep Borrell saying there is no need to ‘dramatise’ the situation.

Russia has massed 100,000 troops on the Ukrainian border and issued a list of security demands to the US and its NATO allies.

The alliance has described most of the list – including a ban on Ukraine joining and the withdrawal of troops from ex-Soviet states – as ‘non-starters’, though high-level talks are ongoing with the US due to provide written responses this week. 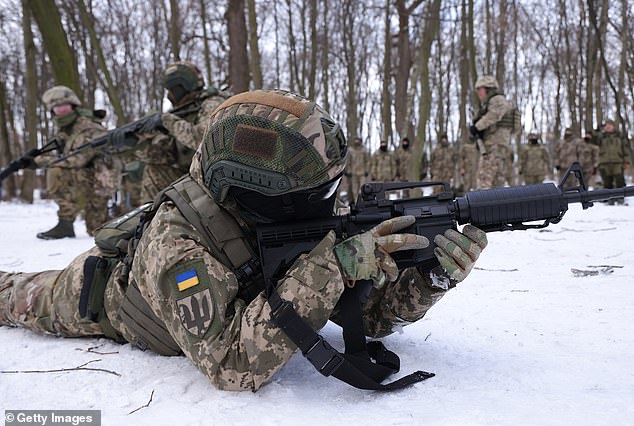 The UK has begun withdrawing its diplomats from Ukraine, with around half of staff due to leave amid growing fears of Russian invasion (pictured, a member of Ukraine’s defence force) 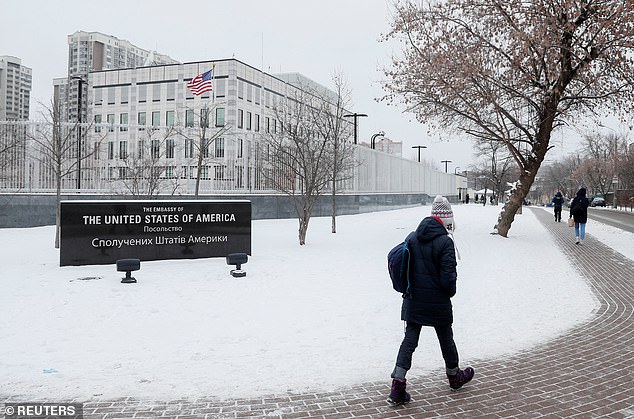 America has also begun withdrawing its staff, with families of diplomats ordered home and non-essential staff offered a route out of the country

America has warned Russia of a ‘swift and severe’ response if it invades Ukraine, which would include a dramatic escalation of sanctions against the country.

The US is also thought to be considering military options to deter Putin, short of a direct confrontation between Russian and American troops.

Pentagon officials presented one plan to Joe Biden during a summit at the weekend, which would see between 1,000 and 5,000 US troops deployed to Baltic states Lithuania, Estonia and Latvia, which border Russian territory.

Troop numbers could then be increased up to 50,000 if the security situation deteriorates, backed up by fresh deployments of ships and aircraft.

The plan would not involve American troops deployed directly to Ukraine, with Biden thought to be loathe to enter another conflict following his disastrous withdrawal of US troops from Afghanistan last year, the New York Times reports.

Biden could make a call on military measures as soon as this week.

Amid warnings from the Pentagon that an invasion is ‘imminent’, families of US diplomats stationed in Ukraine were ordered to leave the country.

Non-essential embassy staff were also offered a route out of the country due to ‘increased threats of Russian military action’.

It comes after the UK alleged at the weekend that Moscow has been making preparations to install a puppet government to take control of Ukraine in the wake of any invasion.

The Foreign Office even went so far as to name former Ukrainian MP Yevhen Murayev as a potential Kremlin candidate.

A senior Biden administration official declined to confirm specific troop numbers on Sunday but said ‘we are developing plans and we are consulting with allies to determine options moving forward.’

Defense Secretary Lloyd Austin and Chairman of the Joint Chiefs of Staff Gen. Mark Milley both attended the meetings virtually.

None of the military options being looked at would see the deployment of additional American troops to Ukraine itself with the president keen to avoid entering another conflict.

Biden is expected to make a decision as early as this week but it appears weaponry is already on the move.

Ukraine’s Defense Minister Oleksii Reznikov tweeted on Sunday night that the government had received a second shipment of weapons from the United States.

‘The second bird in Kyiv! More than 80 tons of weapons to strengthen Ukraine’s defense capabilities from our friends in the USA! And this is not the end,’ Reznikov tweeted, together with photos of the incendiary cargo.

National security adviser Jake Sullivan and counselor to the President Steve Ricchetti joined Biden in person at Camp David as part of the meetings.

‘President Biden was briefed on the current state of Russian military operations on Ukraine’s borders and discussed both our ongoing efforts to de-escalate the situation with diplomacy and our range of deterrence measures that are being coordinated closely with our Allies and partners, including ongoing deliveries of security assistance to Ukraine.

‘President Biden again affirmed that should Russia further invade Ukraine, the United States will impose swift and severe consequences on Russia with our Allies and partners,’ a readout of the briefing said.

The goal military reinforcement in eastern Europe would essentially be to provide deterrence and reassurance to allies.

The Biden administration is also looking at using a ‘novel export control’ that could damage certain Russian industries, such artificial intelligence, quantum computing and aerospace, if any invasion occurs.

According to the Washington Post, it would involve the U.S. deliberately stopping the flow of components such as microchips, that are crucial for Russian industries including civil aviation, maritime and high technology.

The administration could also act in a far broader manner stopping the importing of smartphones, tablets and video game consoles into Russia from the U.S. 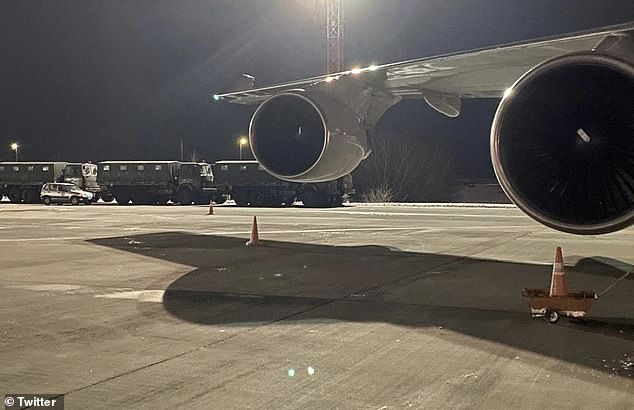 If the U.S. does decide to send more troops to the region, such a move would be a change of tact for the Biden administration which up to now has been restrained over the situation in Ukraine, partly to avoid provoking Russia into invading the country.

If Biden approves the deployment, some of the troops would be American while others would be drafted from other countries in Europe.

Commanders have suggested that more air defense, engineering, logistics and artillery forces would be required.

Besides the troops, Biden could also approve additional aircraft being sent to the region.

After Friday’s talks between the U.S. and Russia, appear to have failed, Russian President Vladimir Putin appeared to be ratcheting up the tension, threatening actions towards Ukraine.

In doing so, the U.S. is now moving away from its previous stance of not wanting to provoke a Russian administration sources told the Times.

During a meeting in Camp David over the weekend, Pentagon officials outlined various options to President Biden, many of which would see American military might move a step closer to the Russian border.

Sources say that there is the potential to send up to 50,000 should the need arise.

Last week, Biden said he warned Putin that any Russian invasion of Ukraine would see more U.S. troops sent to the region.

‘We’re going to actually increase troop presence in Poland, in Romania, et cetera, if in fact he moves,’ Biden said. ‘They are part of NATO.’ 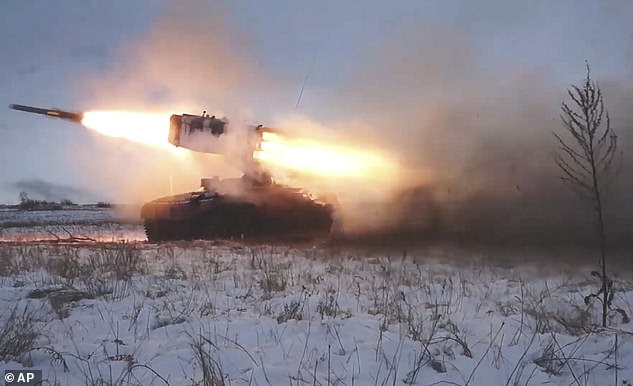 A Russian rocket launcher fires during military drills near Orenburg in the Urals, Russia in December. With tens of thousands of Russian troops positioned near Ukraine, the Kremlin has kept the U.S. and its allies guessing about its next moves in the worst Russia-West security crisis since the Cold War 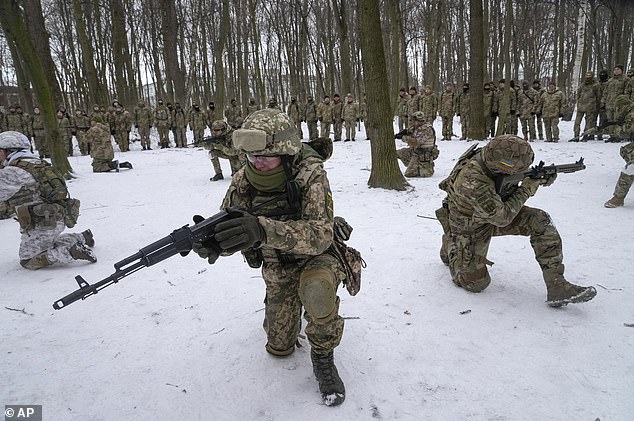 Members of Ukraine’s Territorial Defense Forces, volunteer military units of the Armed Forces, train in a city park in Kyiv, Ukraine. Dozens of civilians have been joining Ukraine’s army reserves in recent weeks amid fears about Russian invasion 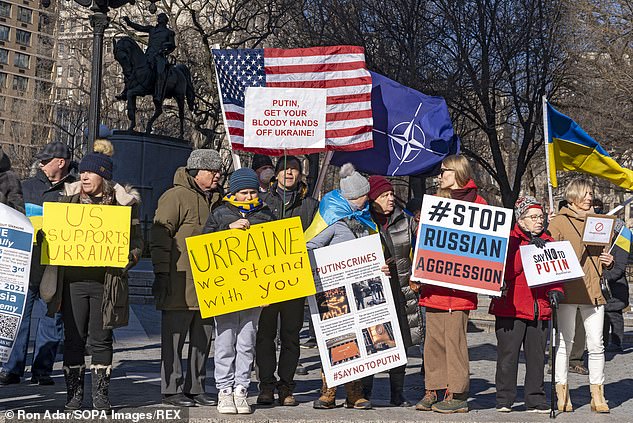 American and NATO flags are seen at a Stand With Ukraine rally in Union Square, New York. Members of the Russian-speaking diaspora and Ukrainian activists demonstrated amid threat of Russian invasion of the Ukraine

The talks that ended in Geneva last week produced no breakthroughs, though American and Russian diplomats vowed to keep a dialogue up, averting the worst-case scenario.

Russian Foreign Affairs Minister Sergey Lavrov said Moscow was still waiting for a written response to its demands for security guarantees, something which Blinken said he would not provide.

On Sunday, Secretary of State Antony Blinken said it’s possible Kremlin officials are just ‘going through the motions’ of diplomacy after a week of intense international talks aimed at de-escalating Russian aggression on Ukraine’s border.

Even after meeting with his Russian counterpart, Foreign Minister Sergei Lavrov, in Geneva on Friday, Blinken admitted on NBC’s Meet The Press that Moscow could still invade the smaller former Soviet state despite the efforts of Western governments.

The US’s chief diplomat also would not rule out possible American military involvement in the worsening conflict, during a separate interview on CNN’s State of the Union Sunday.

‘It is certainly possible that the diplomacy the Russians are engaged in is simply going through the motions and it won’t affect their ultimate decision about whether to invade or in some other way intervene, or not in Ukraine,’ Blinken told NBC host Chuck Todd.

‘But, we have a responsibility to see the diplomacy through for as, as far and as long as we can go because it’s the more responsible way to bring this to a closure.’

Blinken did not indicate when he thought a possible invasion would occur — but also would not give a straight answer when asked if Kyiv ‘appears safe, at least in the near term.’ 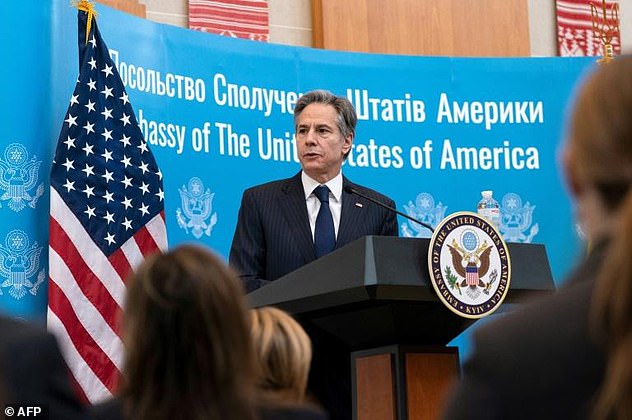 US Secretary of State Antony Blinken at the US embassy in Kyiv on January 19, 2022

‘This is something again that we’re tracking intensely, hour by hour and certainly day by day,’ he said.

Blinken ratcheted up his warnings to Moscow during his interview on CNN, claiming it could take a single soldier crossing the border to trigger a global reaction.

‘If a single additional Russian force goes into Ukraine in an aggressive way, as I said, that would trigger a swift, a severe and a united response from us and from Europe,’ he told host Dana Bash.

Vladimir Putin has placed more than 100,000 troops at the Ukrainian border, and last week Blinken warned that Russia had the capability to double that number in short order. Moscow has said it has no plans to invade Ukraine.

On Sunday, the United States has ordered the families of its diplomats in the Ukrainian capital Kyiv to leave the country ‘due to the continued threat’ of a Russian invasion, the State Department said.

Washington has also authorized the ‘voluntary’ departure of its non-essential embassy staff and urged US citizens in the Eastern European country to ‘consider departing now,’ saying it will not be in a position to evacuate them after any possible incursion by Moscow.