Tua Tagovailoa entered the NFL's concussion protocol on Monday, a day after he apparently sustained and played through a head injury against the Green Bay Packers.

The incident raised two key questions: Why wasn't Tagovailoa's injury identified during the game, and should he continue to play this season after multiple head injuries? The NFL and the NFLPA's top doctors addressed both questions on Tuesday.

Dr. Allen Sills, the NFL's chief medical officer, told NFL Network that nothing from Sunday's game should have triggered the NFL's concussion protocol for the Miami Dolphins quarterback. The protocol is only triggered when a player sustains a blow to the head, then displays symptoms of injury. Tagovailoa didn't display symptoms during the game, per Sills.

"What our spotters and our unaffiliated neuro doctors are looking for is any blow that transmits force to the head or neck area, followed by that injury behavior," Sills said. "And so, there are many blows to the head that occur during a game. …

"There were no visible signs present, even though there was a blow to the head and the player did not report any symptoms, despite being in contact with the medical staff throughout the game. So, there was nothing that would have triggered the protocol in the moment."

Sills noted that anyone involved in the game can flag symptomatic behavior, including the injured player, his teammates, coaches and officials. Per Sills, nobody flagged Tagovailoa as symptomatic on Sunday.

Dr. Thom Mayer, the chief medical adviser for the NFL Players Association, told USA Today on Tuesday that the NFLPA is reviewing footage and reports from the NFL's unaffiliated neurotrauma consultants at Sunday's game to see if anything was missed.

“We’re moving at a logical sequence to review and see what’s there,” Mayer said.

Here's the play widely believed to be responsible for Tagovailoa eventually entering protocol.

Saw this live. And I recorded it because I knew as soon as I saw it. This happened late in the 1st half. And I believe Tua played 2nd half with a concussion. His head bounced off the ground. And it was very similar to the hit in Cincinnati. 3 INTs in the 4th qtr. proved it to me. pic.twitter.com/Djl0xkGToX

The back of his head bounced off the turf, similar to a Week 3 injury that saw Tagovailoa sidelined against the Buffalo Bills. He returned to finish that game and played the next week against the Cincinnati Bengals. He ended that game in the hospital after another blow to his head required him to leave the field on a stretcher.

That leads to the next question: Should Tagovailoa play in Week 17 against the Patriots or at all for the rest of the season? An apparent head injury wasn't properly identified in Week 3, and he ended up in the hospital in Week 4. If the protocol failed him before, who's to say that it won't again, even it if it's since been revised?

Several former NFL players, including Robert Griffin III, Booger McFarland and Charles Woodson said on Monday that the risk is too much and that Tagovailoa shouldn't play again in 2022, if ever. 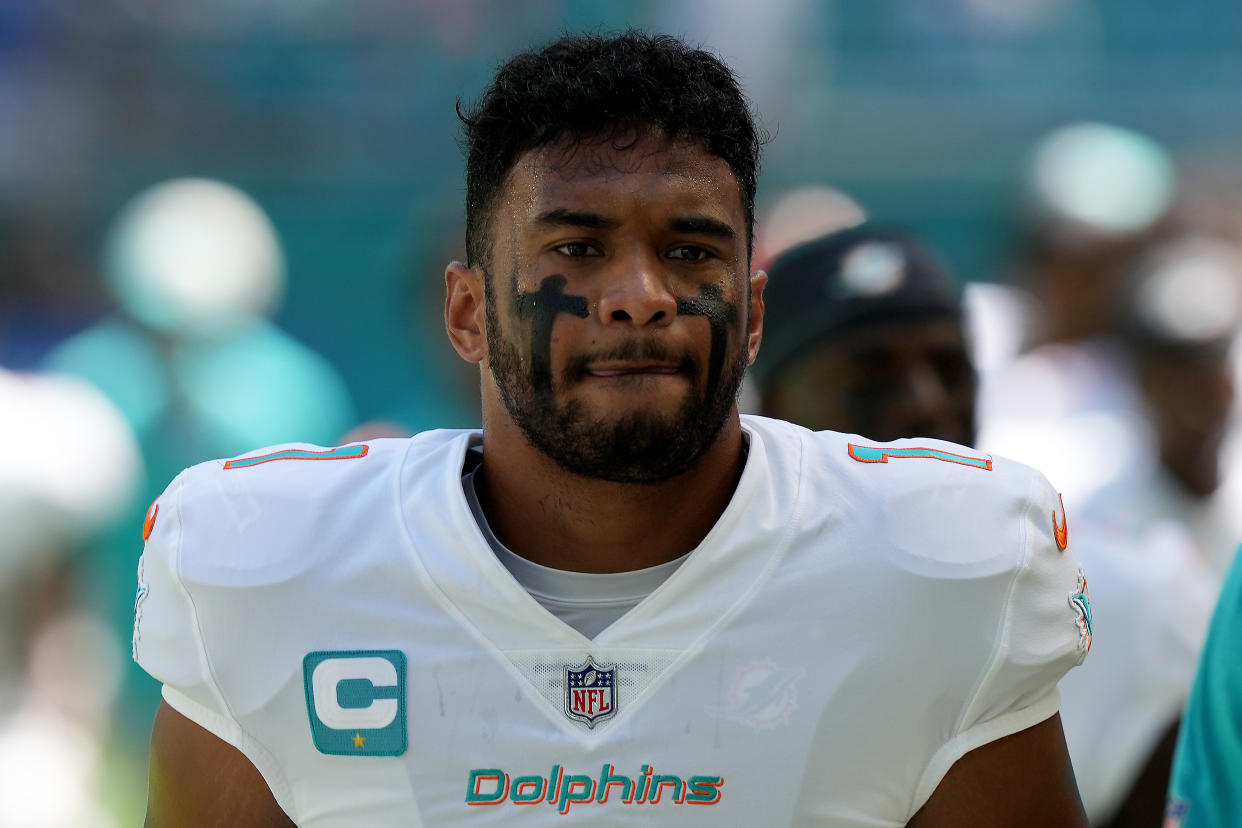 Sill on Tuesday pointed to the protocol that requires Tagovailoa to go through a multi-step process with team and independent neurologists before being cleared by the Dolphins. He also acknowledged that medical science isn't capable of accurately projecting future injury risk and refrained from making a recommendation for Tagovailoa.

"And what I would say is that in any case of this nature, the team is going to behave in a very conservative manner," Sills continued. "Because at the end of the day our protocol is to make sure that the athlete appears to be recovered, but we still with today's technology can't really estimate that risk of future injury.

"And so what we have to do is make sure the athlete is fully recovered and then make sure that their voice and their autonomy is respected in this decision-making process."

Mayer, meanwhile, suggested that it was too early in the process to make any calls on Tagovailoa's status for Week 17 or beyond.

"But I fully understand the logic of people saying, ‘Hey, he should sit out the rest of the year,'" Mayer said. "There will be people who say he should retire. That’s a whole spectrum of options.

"That’s kind of Chapter 24. We’re on Chapter 1 now. So, we’re just going to logically move through the chapters and advise the player, who ultimately makes the decision."

The Dolphins, medical staff and Tagovailoa have four days to figure out the next step before Sunday's game against the New England Patriots. They'll do so amid the competing interests of the Dolphins' playoff fate and Tagovailoa's health.