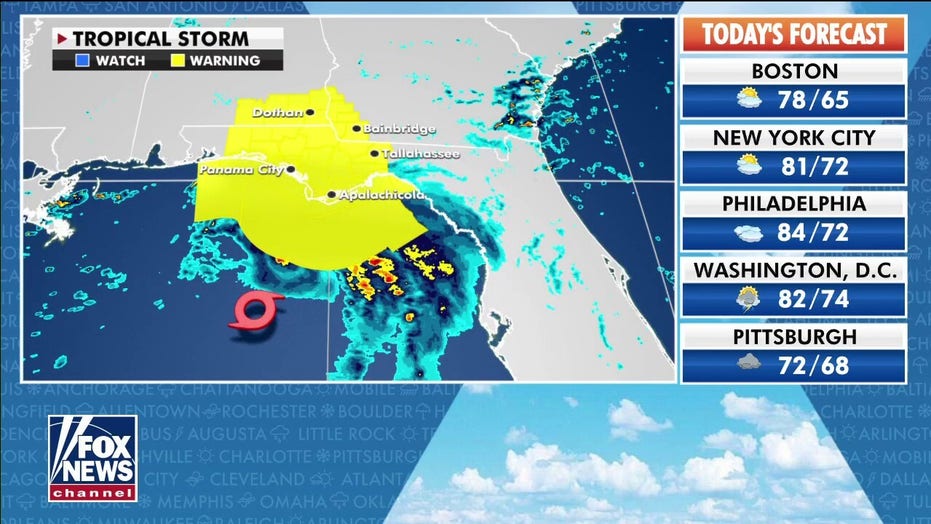 Adam Klotz has your FoxCast.

The storm was among three brewing in the Atlantic Ocean that were being watched by the National Hurricane Center.

Fred made landfall over Cape San Blas, 118 miles southwest of Tallahassee, around 2:15 p.m. local time and continued to move through several counties with winds in excess of 40 mph. The storm’s maximum sustained winds were 60 mph as it moved north-northeast at 9 mph.

Images and videos posted online show strong winds and rain pounding some areas. One Twitter user posted that a tree fell and took out the power in Panama City.

The storm is expected to weaken Tuesday but still produce heavy rain and flooding in parts of neighboring states like Georgia and Tennessee, according to the NHC.

Emergency management officials in Gulf County, where Fred made its landfall, received reports of downed trees and warned people to stay home and to be careful if they must travel.

“We do not need looky-loos getting hurt or getting in the way of the cleanup process,” the agency posted on social media.

The main threats Fred poses are rainfall and a storm surge, the NHC said.

Sand in Mexico Beach, near Cape San Blas, was blown as wind gusts picked up near the center of the storm.

A storm surge warning remained in effect Monday evening along the Florida coast to Indian Pass to Yankeetown.

Along Panama City Beach, lifeguards have hoisted double-red flags, warning beachgoers against going into the Gulf of Mexico. The area braced for rain and some wind from the storm, and while no evacuations were ordered, schools and government offices were closed Monday.

Meanwhile, Tropical Depression Grace drenched earthquake-damaged Haiti on Monday, threatening to dump up to 15 inches of rain on a landscape where people are huddling in fields and searching for survivors.

Tropical Storm Henry was near Bermuda Monday, about 145 miles offshore.