ANKARA/ISTANBUL (Reuters) – Turkish President Tayyip Erdogan has gone on the warpath against the main opposition days ahead of a re-run of a mayoral vote in Istanbul, scrapping plans to avoid divisive rhetoric that some officials in his ruling AK Party believed would alienate voters. 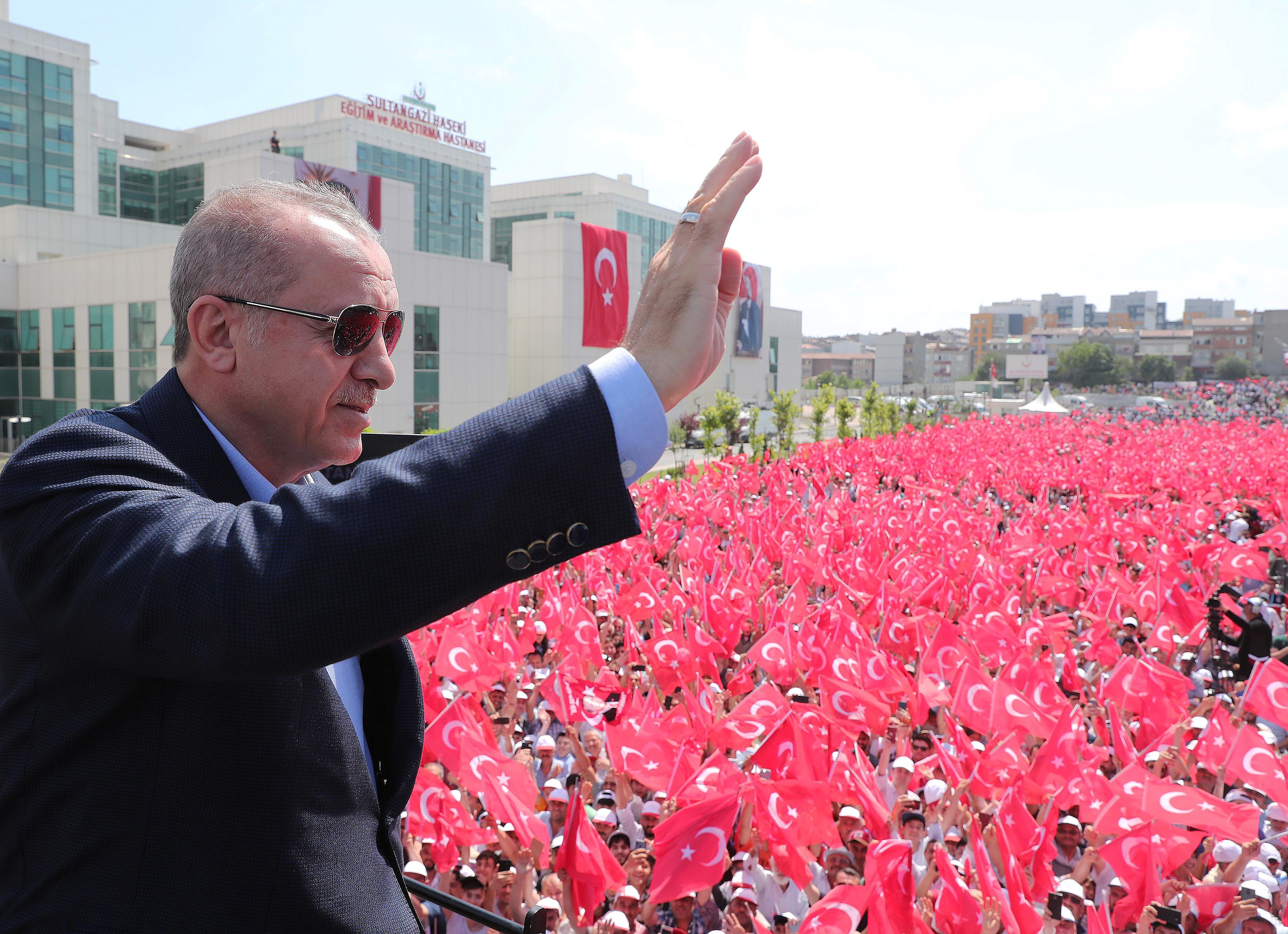 After weeks of keeping an uncharacteristically low profile, the president re-inserted himself into the campaign with his usual confrontational style.

The switch is a risk for Erdogan and the AK Party (AKP), which suffered a shock defeat in Istanbul in March local elections – a loss that some in his party believed was in part due to the president’s uncompromising style.

The loss marked one of his biggest setbacks in 16 years in power, and the AKP challenged the result.

According to interviews with five party officials, as well as their advisers, Erdogan and his party had decided in recent weeks to effectively air-brush the president from the campaign ahead of the June 23 Istanbul vote, including erasing his face from highway-side billboards and cancelling dozens of planned rallies across the city.

AKP officials had concluded that Erdogan’s uncompromising approach had become a liability with some key voters in Istanbul, especially Kurds and AKP supporters who were turned off by his polarizing rhetoric, the party insiders said.

By laying low, Erdogan also could have distanced himself in the event of another defeat, advisers added.

But things changed earlier this week with internal party polling showing Imamoglu slightly ahead, prompting Ergodan to intervene, according to two of the people.

In recent days, “Erdogan had asked party officials if it is possible to arrange a meeting or a rally to make a speech every day in Istanbul” ahead of the vote, a senior AKP official said. “That’s the new strategy.”

Defeat on Sunday for Erdogan’s hand-picked mayoral candidate, former prime minister Binali Yildirim, would serve as a further embarrassment for the president after the AKP succeeded in annulling the March result.

It would also weaken what only three months ago appeared to be his iron grip on power as Turkey battles recession, jockeys in war-torn Syria, and balances its U.S. and Russian ties.

It may embolden challengers to his rule, although it wouldn’t immediately affect the balance of power in Ankara.

An AKP spokesman declined to comment on the shifting strategy.

In public appearances in recent days, Erdogan urged supporters to help him rally voters this weekend.

“We can’t hand our Istanbul to these liars,” Erdogan said in a speech on Tuesday, referring to the main opposition Republican People’s Party (CHP) and its mayoral candidate Imamoglu.

Imamoglu has denied any links with the coup plotters.

“I know things will be said,” Imamoglu said in an interview with state broadcaster TRT Haber late Tuesday. He added: “These attacks are the attacks of those who cannot digest that we are ready for the task.”

Erdogan, the country’s most dominant political figure since the modern Turkish state’s founder Mustafa Kemal Ataturk, launched his own career in Istanbul and had served as its mayor.

The AKP and its Islamist predecessors had for 25 years controlled the city, which has a budget of close to $4 billion and accounts for a third of the country’s economic output.

Ahead of Turkey’s local elections in March, Erdogan held up to eight rallies a day addressing thousands of voters and millions more on live television. He delivered tough nationalist messages, asking voters to support the AKP as “a matter of survival.”

“The Erdogan campaign strategy backfired, especially among Kurds and middle-class conservatives,” in part because of his polarizing rhetoric said Galip Dalay, a visiting scholar at the University of Oxford.

After Erdogan’s Istanbul mayoral candidate Yildirim lost by some 13,000 votes, the AKP complained that the election was marred by irregularities.

Last month, Turkey’s High Election Board scheduled the re-run, a move that opponents said was politically influenced and heightened concerns about eroding rule of law and institutional independence.

According to AKP officials and insiders, the party is targeting the 1.7 million voters who stayed home on March 31, particularly conservative Kurds and AKP supporters looking for more focus on fixing the country’s stalled economy.

“People who didn’t vote and disenchanted voters, as well as Kurdish voters, will be a major factor,” said one AKP official, who added that the party was looking to boost turnout from an already high 84 percent in March to 94 percent.

The party had in recent weeks emphasized a face-to-face campaign in areas that had relatively low overall turnout and high Kurdish populations, officials say.

But a return to a prominent role for Erdogan in the campaign in the past few days followed fresh polling data and a debate on Sunday between the two mayoral candidates.

Imamoglu, who won the March vote, was gaining momentum, according to figures published Monday by polling firm Mak Danismanlik. Internal polls from the two leading parties showed the CHP candidate enjoying a narrow lead over the AKP’s Yildirim as of last week.

“Erdogan looked at the internal polls and saw that Yildirim still lagged behind, so he decided to go all in,” said one source close to the party with knowledge of the recent polling. “But it could have the opposite impact on voters and push them away.”

In Istanbul’s working-class Esenyurt district, where turnout was low in March and the CHP ousted the AKP, resident Halil Cetin said Erdogan should step back.

“This survival rhetoric was too much at the center and people were annoyed by this, saying ‘This is a municipal vote, what kind of a survival issue could there be?’” said Cetin, originally from Turkey’s predominantly Kurdish Diyarbakir region. Yildirim “resonates,” he added.

Among the overtures the AKP has made to Kurds in recent weeks was lifting a years-long ban on lawyers visiting jailed Kurdish militant leader Abdullah Ocalan, a move that prompted several Kurdish lawmakers and thousands of prison inmates to end hunger strikes.

But such gestures were unlikely to make a meaningful impact on Kurdish voters, said HDP Group Chairman Saruhan Oluc. “These little acts have no chance of creating a positive response,” he said in an interview.

The economy remains another key challenge for AKP and Erdogan, who have seen support hurt by last year’s currency crisis that tipped Turkey’s economy into recession, devalued the lira by 30% and sent inflation soaring.

“The economy is problematic. The voters are heavily influenced by the developments in the economy and we see the impact of that by them not going to the ballot box,” the senior AKP official said.