The family with no fingerprints: Three generations of Bangladeshi family face hurdles buying Sim cards, voting or passing through airports, due to rare genetic mutation that only affects a few people in the world

A family in Bangladesh appears to have no fingerprints due to a genetic mutation so rare it is thought to affect only a small number of people in the world.

Apu Sarker, 22, and the men in his family share the condition which leaves the pads of their fingers smooth and devoid of the unique ridges that make up fingerprints, the BBC’s Mir Sabbir reported.

Where having no fingerprints caused few problems for Sarker’s grandfather, the same can’t be said decades later.

Fingerprints are now used for everything from passing through airports to opening smartphones.

In Bangladesh, providing fingerprints is also a necessary step in applying for National ID cards, passports and driver’s licenses.

Sarker’s father, Amal, has faced hurdles obtaining each of these important documents. He was eventually issued an ID card – required in order to vote in elections – with ‘NO FINGERPRINT’ stamped on it and received a passport after showing a medical certificate.

However fears of problems at the airport have prevented him from ever using the passport and a driver’s license remains out of reach. 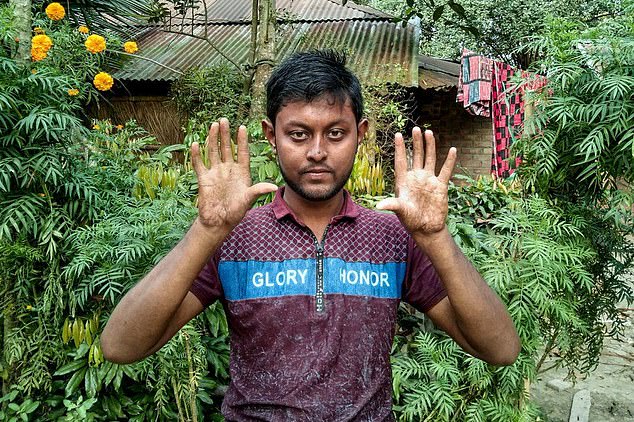 Apu Sarker, 22, (pictured) and the men in his family share the condition which leaves the pads of their fingers smooth and devoid of the unique ridges that make up fingerprints, the BBC ‘s Mir Sabbir reported 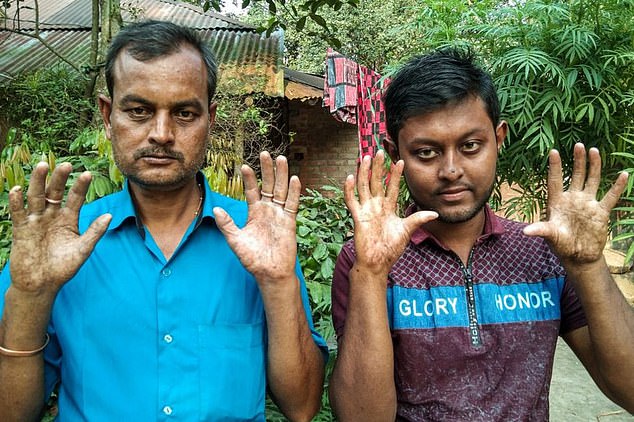 Sarker (right) and his father Amal (left) hold their hands up, showing the lack of fingerprints which has caused them many problems when applying for official documents

Despite Amal having paid the fee and passed the exam required to obtain one, authorities refused to issue the license due to his lack of fingerprints.

He told the BBC that he carries proof he paid the fee with him but has been fined twice after being stopped by police who couldn’t understand his predicament even after he showed them his hands by way of explanation.

Even something as simple as getting a working mobile phone has become an issue for the men in the family since Bangladesh in 2016 began requiring fingerprints to match with the national database when buying a Sim card.

‘They seemed confused when I went to buy a Sim, their software kept freezing every time I put my finger on the sensor,’ Sarker told the BBC over Zoom.

The sale was denied and now the men all use Sim’s registered to Sarker’s mother.

Adermatoglyphia is a rare condition that is characterised by the lack of ridges on the skin of the fingers, toes, palms of the hand and soles of the feet.

Because the pattern of these ridges form each person’s unique fingerprints, people with this condition are not able to be identified by their fingerprints.

In some cases, adermatoglyphia may occur without any additional signs or symptoms; however, it may be associated with other skin abnormalities including small white bumps on the face, blistering of the skin, and/or a reduced number of sweat glands on the hands and feet.

Adermatoglyphia is caused by mutations in the SMARCAD1 gene and is inherited in an autosomal dominant manner.

Treatment is typically only necessary if other features are present.

Source: US National Institute of Health

A lack of fingerprints also caused problems for Sarker’s uncle Gopesh who had to wait two years to get a passport authorised and had to travel to the capital, Dhaka, ‘four or five times’ in the process.

But his troubles didn’t end there, he had to convince his supervisors to allow him to sign an attendance sheet when his office started using a fingerprint attendance system, the BBC reported.

The family, who live in a village in the northern Rajshahi district, are thought to suffer from a rare condition known as Adermatoglyphia.

The condition results in a lack of ridges on the fingers, hands, toes and feet and can be accompanied by symptoms including reduced sweat glands in the hands and feet, small white bumps on the face and blistering of the skin, according to the US National Institute of Health.

It is caused by mutations in the SMARCAD1 gene and is an inherited condition, which first came to wide attention in 2007, the BBC reported in an exclusive story.

Professor Peter Itin, a Swiss dermatologist, was contacted by a woman in her late 20s who was unable to enter the US as customs officers could not record her fingerprints.

Itin found that the woman and eight members of her family appeared to have flat finger pads and reduced sweat glands in the hand. Together with dermatologist Eli Sprecher and graduate student Janna Nousbeck, Itin studied the DNA of 16 members of the woman’s family, finding that seven had fingerprints while nine did not, the BBC reported.

‘Isolated cases are very rare, and no more than a few families are documented,’ Prof Itin told the broadcaster.

In 2011 the team identified the SMARCAD1 gene as the cause of the rare disease, which appeared to cause no other health effects though little else was known about it at the time.

Sprecher told the BBC that the part of the gene affected by the mutation as apparently having ‘no function, in a gene of no function’.

While officially named Adermatoglyphia, the condition is also known as ‘immigration delay disease’ due to the first patient’s problems getting into the US. 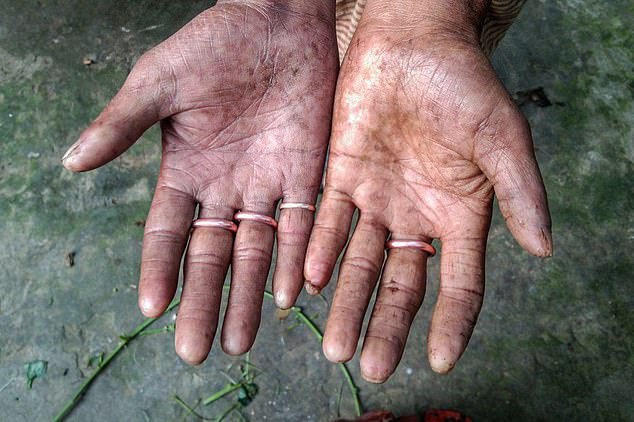 The family, who live in a village in the northern Rajshahi district, are thought to suffer from a rare condition known as Adermatoglyphia. The condition results in a lack of ridges on the fingers, hands, toes and feet and can be accompanied by symptoms including reduced sweat glands in the hands and feet, small white bumps on the face and blistering of the skin, according to the US National Institute of Health. Pictured: Amal Sarker’s hands 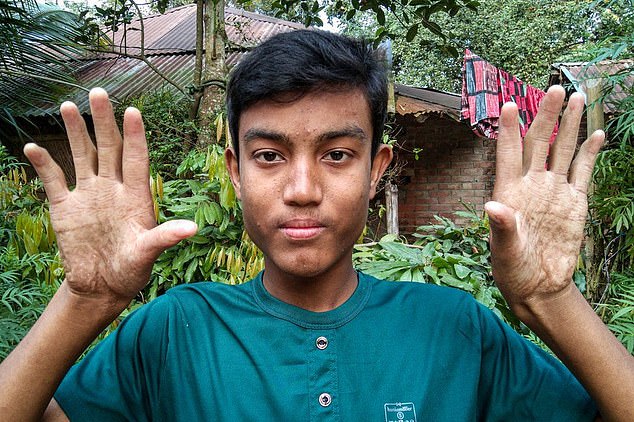 Back in Bangladesh, a dermatologist had diagnosed the Sarker family with congenital palmoplantar keratoderma.

Professor Itin believes this may have developed into secondary Adermatoglyphia – a version of the disease which can also result in dry skin and reduced sweating on palms and feet – symptoms reported by the Sarkers.

Professor Sprecher told the BBC his family would be ‘very glad’ to help with additional genetic testing to confirm the Sarkers’ diagnoses.

While additional tests may provide added certainty, they will do little to alleviate the hurdles faced by the Sarkers.

‘The way me and my sons are getting in all sorts of problems, for me this is really painful,’ Amal told the BBC.

He and his son recently received a new kind of national ID card which uses retina scans and facial recognition along with fingerprints, but other official documents remain hard to come by.

‘I am tired of explaining the situation over and over again. I’ve asked many people for advice, but none of them could give me any definite answer,’ Sarker told the BBC.

‘Someone suggested I go to court. If all options fail, then that’s what I might have to do.’ 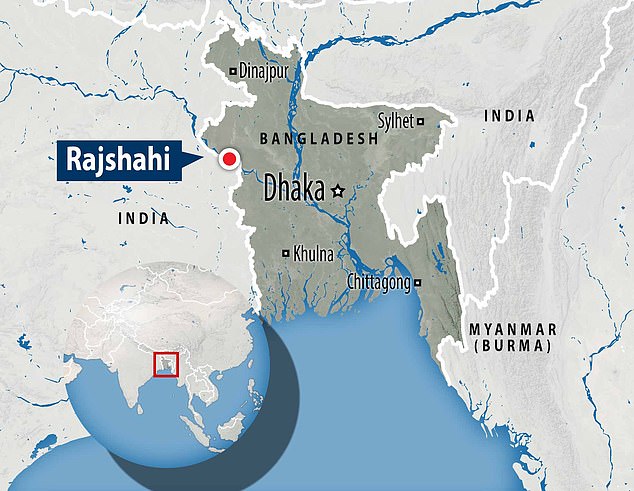