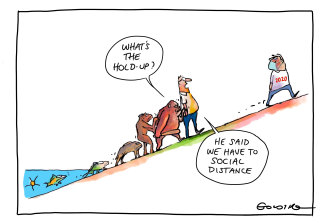 Eddie McGuire is a prominent media performer and seemingly good bloke who is the president of an Aussie rules football club. Your reporter (‘‘The blue-collar boy who rose to the top: why Labor needs to lock in Eddie’’, The Sunday Age, 20/12) thinks he could be Labor leader.

Eddie over the years has given us his great ability, but has also given us some outrageous football clowns (one in particular) and made some poorly judged commentary.
During this time members of the ALP have been working away attending meetings, developing

policies, working on polling booths and keeping the Labor Party alive. They are really the ones that should be selecting the needed competent people to represent the ALP in elections not media commentators or the leaders of factions who run the ALP and meet in metaphorical smoke-filled rooms.

Your reporter, though, does importantly prompt thought on the reasons why the level of politicians, and not just the ALP, is not as good as it could be.
Malcolm McDonald, Burwood

Collateral damage?
Your correspondent (Letters, 24/12) suggests that the Australia Post expenses culture inquiry is being kept under wraps because it ‘‘unearthed evidence of much more serious dysfunction’’.

I suspect it’s been hushed up because it revealed the earth-shattering news that bonuses are normal practice in big business (albeit more usually as cash than in horological form), and hence the logical conclusion is Christine Holgate was hounded out because the government was having a bad hair day.
Alastair McKean, Greenwich, NSW

Refusal speaks volumes
The Prime Minister’s refusal to allow the public release of the findings into the review which followed his pillorying and humiliation of the former CEO of Australia Post speaks volumes about the character of the PM and his government.
Geoff Feren, St Kilda East

Jessie Tu writes: ‘‘Lives have meaning when we root them in stories, and stories exist through the act of telling … To witness something other than our own personhood. A life, a tree, a planet’’.
Beautifully said, and a soulful summation of Karen Wyld’s Australian novel. Keep reviewing and writing, Jessie Tu.
Lesley Osenieks, Birregurra

Chalk and cheese
Being from a multi-generational military background I wonder why people think ADF personnel are trained in the skills needed policing civilians.

Police training and military training are like chalk and cheese.
John Simmonds, Collingwood

Relief is not far away
As we in Victoria come through our Christmas celebrations with our families and friends we have empathy for our fellow Australians in NSW. We have been there, coped with political incompetence at the highest level, and know what they are coping with, but in Oz we know there is relief not far away.

At the same time we have sympathy for our families in England and America because they are enduring a protracted period of harsh transmissions and restrictions with political regimes at odds with common sense.
Margaret Raffle, Keilor East

The states did the work
So, ‘‘Australians may need time to recuperate in 2021 after a year of crisis management by the federal government’’ (‘‘Out of the pan and into an election’’, The Age, 26/12).

Really? From January to December 2020, our state governments have managed crises from fire and flood to coronavirus. The federal government has been playing catch-up and riding on our premiers coat tails, opportunistically trying to share the glory or crack a whip depending on what Scott Morrison, Peter Dutton and Josh Frydenberg thought in their best interest at any particular point in time.

All 2020 kudos is due our state leaders.
Wendy Tanner, Footscray

The mighty dollar wins
Yes, universities are now a valuable export industry for Australia (‘‘Uni chief’s plea to PM on foreign students’’, The Age, 26/12). Tertiary education has become a commodity, where courses are tailored and marketed to attract the highest-fee-paying students, often from overseas.

Universities are another victim of the mighty dollar – a far cry from the ideology of them as places for experiences and personal development, where people went for the acquisition of knowledge, learning and scholarship for its own sake.
Leigh Ackland, Deepdene

Check the use-by date
It seems nothing, not even the COVID crisis, should stop the mad rush for that elusive bargain at the Boxing Day sales (‘‘Big wins in store at ‘grand final,’’’, The Age, 26/12).

Naturally, retailers look forward to huge profits on this day, yet it may be shoppers who will suffer, and not just from the usual injuries of being elbowed and jostled.

Not a patch on the Pie
As an ice-cream lover, not one of those ice-creams (‘‘Hello, ice to eat you’’, The Age, 26/12) reach the standard of my much lamented Eskimo Pie. Smooth, rich vanilla ice-cream, covered in dark, crisp chocolate. The ratio of chocolate to ice-cream just perfection.

The next best to these treats was the in-house cinema choc-tops.
Trish Young, Hampton

Note from the Editor