Shirley Margaret Eaton lived her life as a warm, cheerful and bubbly person who showed kindness to all and fortitude in her own troubles. People loved being in her company.

Shirley was born at Sister Bull’s Maternity Hospital, Bairnsdale, into the huge Carstairs clan, the ancestors of whom still live and work in the area. Her maternal grandparents were Emily (Cissie) Lee, who came from an old fishing family, and Dave Carstairs, son of William Carstairs, who brought professional fishing to Lakes Entrance and the Gippsland Lakes in 1883. She went on to become a connecting link to the pioneer families of East Gippsland.

Born the daughter of Archibald Eaton and Ina (Carstairs) Eaton, Shirley had two siblings, Faye (Lancaster) and Ian (Buzzy), deceased. After her parents divorced, life wasn’t easy for the family as community attitudes towards divorce were harsh and judgmental and consigned a woman to a lifetime of poverty. But Dave and Cissie Carstairs took the family to their bosom and showered them with love and kindness and, in time, life went on and they survived and thrived, becoming pillars of the community.

She loved fashion and took great pride in her appearance, always dressed to impress. As a young woman she won the belle of the ball many times and was a fashion buyer for Foard’s department store in Bairnsdale. She also ran Sharon’s frock salon in Lakes Entrance for many years.

When Shirley married Charlie Hancock (junior) in the wedding of the year at St Aiden’s Presbyterian Church in Mechanics Street, Lakes Entrance, she broke all records for the town that day by having, not one, but two ministers officiating. Plus, the bridal flowers were transported by rail from Irelands florists in the city and the gowns were supplied by Patches, also of Melbourne. The whole town turned out for a look. 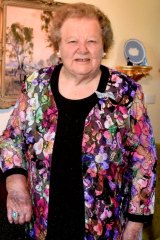 Shirley became connected to pioneering Gippsland families – the Grants and the Doyles – and joined a family that was one of the area’s largest employers. Starting in Pambula in the 1920s and moving to Lakes Entrance in 1946, the Hancocks pioneered road transport of fish along south-eastern Australia, particularly the runs from Lakes Entrance to the Sydney and Melbourne fish markets. Charlie Hancock snr was the Lakes Entrance fish agent, performing similar operations to today’s LEFCOL, and later the company became Australia’s largest transporter of fish.

She took on roles of leadership and responsibility in the business and in the town. On occasions when one of the trucks came to grief, the sad duty of informing and consoling a grieving wife fell to her.

She helped families who were struggling because of a wayward husband and father and supported her husband through financial difficulties that inevitably fell on companies in the tough business of trucking. She played hostess to many dignitaries and businesspeople as well as working for the common good of the community.

She was Aunty Shirley to her Aboriginal brothers and sisters of the Lake Tyers Kurnai people and they had strong mutual love and respect.

During her rich and long life, Shirley was a Red Cross volunteer, a committee member of the Mechanics Hall, a life member and longest-serving president and Lakes Entrance Senior Citizens Club, and president of both the Infant Welfare Centre and the Lakes Entrance Primary School Mothers Club. She worked hard fundraising for the Save the Children Fund and the Children’s Protection Society, was a member of the Lakes Entrance Football Club and also of the bridge club where the championship cup is named in her honour. For many years she presented the golf club’s oldest trophy, the Hancock Cup.

When you live until the ripe old age of your 90th year, inevitably you become the last person of your generation to do many things. Shirley had notched up many “lasts”.

She was the last person to have played golf at the old Industrial Estate course and the last surviving member of the Query Club, formed by Ida Carstairs to aid the war effort in World War II. As a teenager she was a member of the Lakes Entrance plane spotters who kept vigil searching for enemy aeroplanes. To complete this task, she needed to be able to recognise, from shape and size, all forms of military aircraft.

After the war, for many years Shirley gave holidays to Legacy children of fallen fathers. She was the last person of her generation to be able to give a living reference to help with Historical Society genealogical searches. She was also the last of the exclusive Birthday Girls. Formed by Club Hotel owners, the Misses Hallett, this was a group of blue-rinse influential women who tried very hard to maintain high standards in the town.

Shirley was recognised for her many contributions to the community by being made a Legend of the East Gippsland Shire and was asked to plant the Lakes Entrance centenary tree at Buchan where it thrives today.

Over the years, Shirley assembled and cared for the Hancock Collection, a compilation of relevant historical furniture and memorabilia from local grand homes. She regularly attended historic house auctions and acquired pieces of Lakes Entrance history. It would be wonderful if a permanent home could be found for this collection so that it is preserved for generations to come.

Shirley is survived by her two sons, Brian and Trevor, her daughter Evelyn, her four grandchildren, James, Christopher, Mark and Stuart, her sister Faye, and many nieces, nephews and extended clan members.