All aboard the Tsars Gold: The first tourist train to travel through Russia’s Arctic region sets off – with passengers enjoying stylish luxury from St Petersburg to Oslo

The first tourist train travelling through Russia’s Arctic region heading for Norway’s capital Oslo set off from Saint Petersburg station on Wednesday with 91 passengers aboard.

The train, named ‘Zarengold’ (‘The Tsars gold’ in German) has ten cars – eight to accommodate passengers an two restaurants, where Russian chefs specially trained in Switzerland will prepare the food for travelers.

‘The Arctic fascinates everybody,’ said Nurlan Mukash, executive director of the German Lernidee Erlebnisreisen – the tour group behind the project. 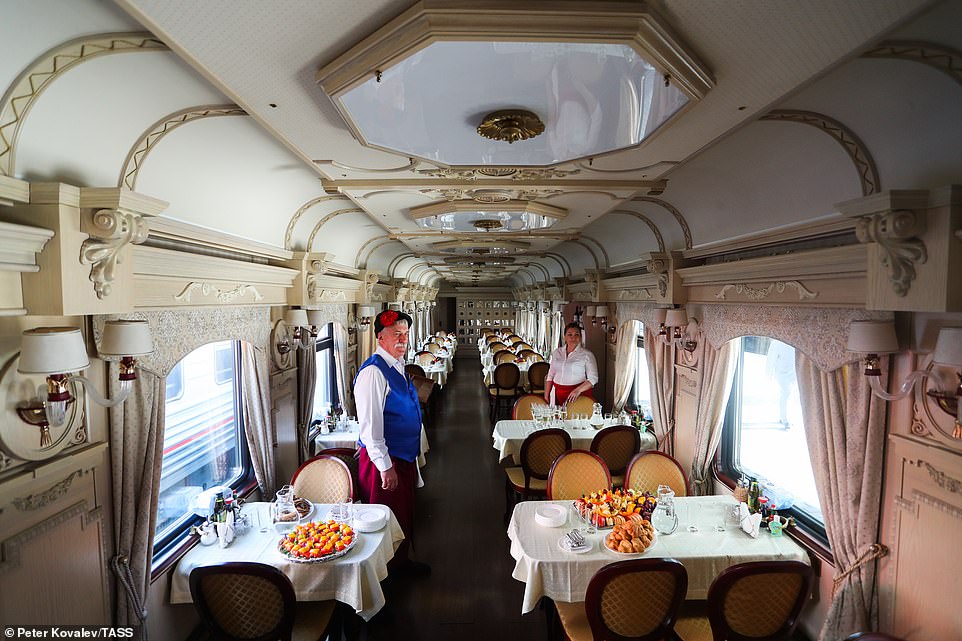 A dining car in the special tourist train running through the Arctic regions of Russia and Norway, before departure from St Petersburgs Moskovsky Railway Station 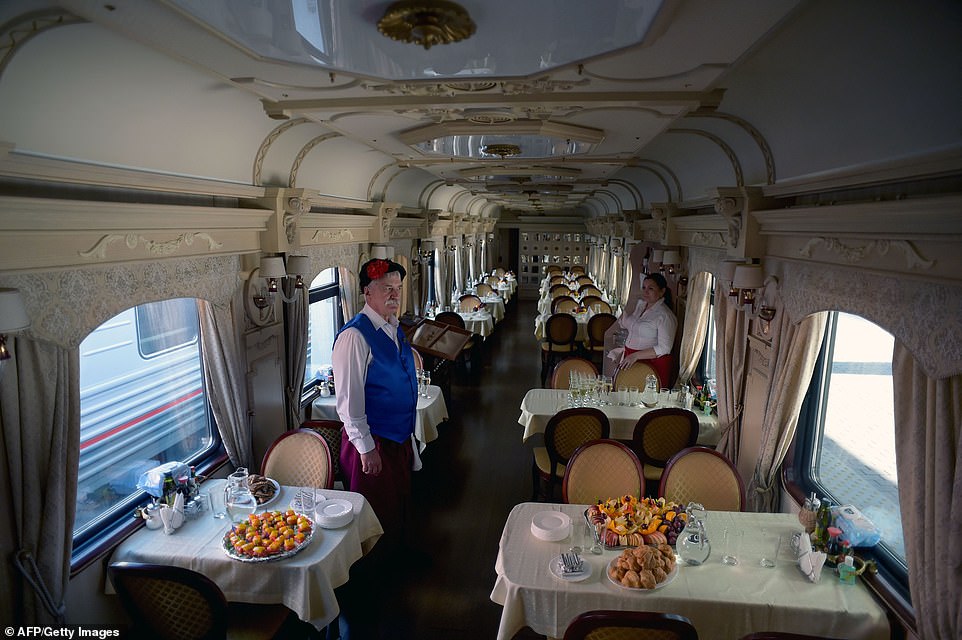 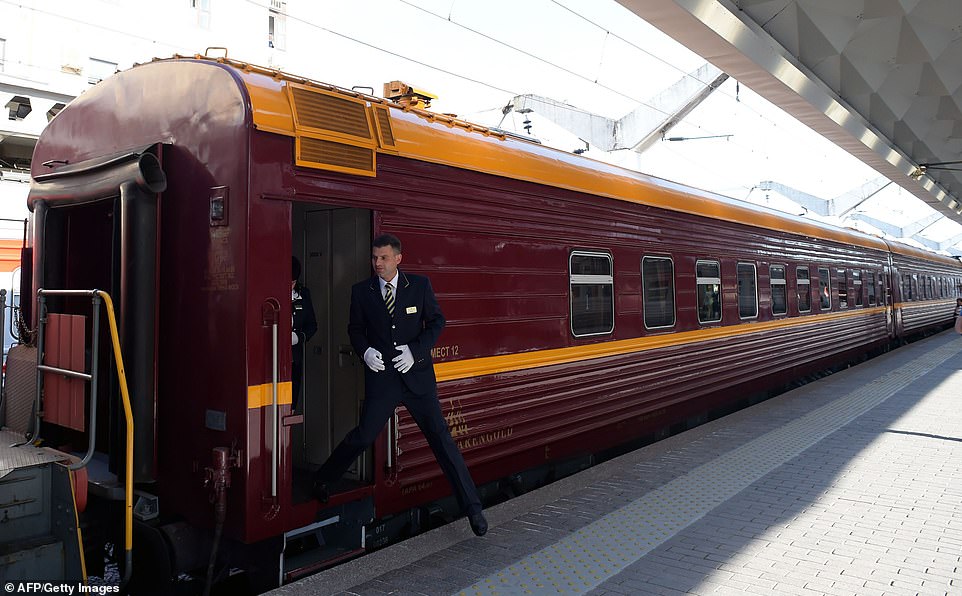 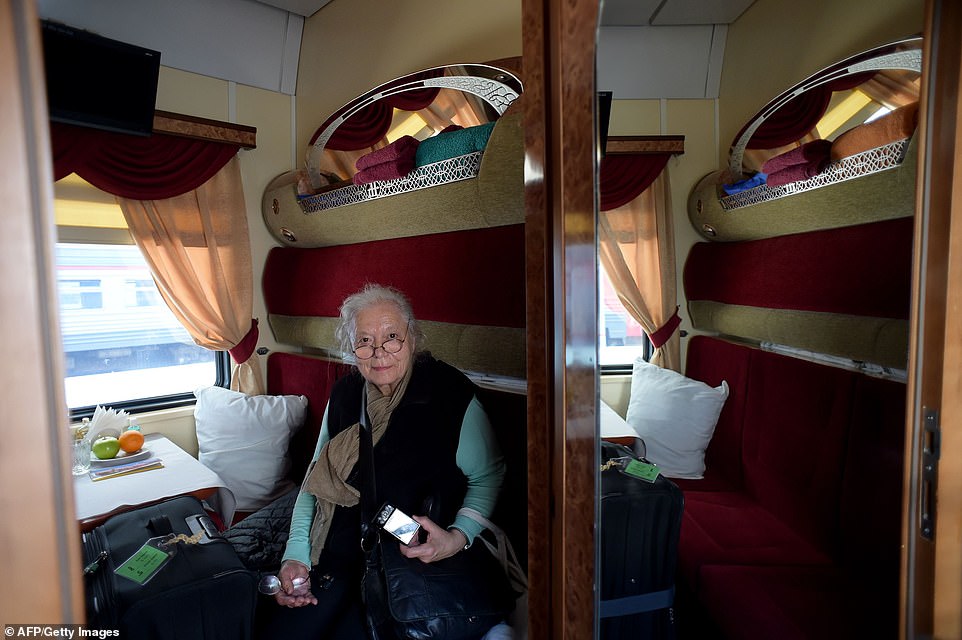 Gertruda Cless poses at a sleeping car of the first tourist train passing through Russia’s Arctic regions to Norway. She is one of 91 tourists aboard for the ‘test journey’, who hail from seven countries including the US, Germany, Norway and Russia

‘This destination has been covered by Canadian and Norwegian tourist agencies but, this has not been the case for Russia,’ he added.

The unusual arctic train will stop in six cities. First, travelers will see Petrozavodsk, where they can visit Kizhi – a picturesque island on Lake Onega.

The island has been turned into an open-air museum with around 80 historical wooden structures, including the Kizhi Pogost, a UNESCO World Heritage site.

The next stop is the historic Russian town of Kem, located on the shores of the White Sea, where passengers will have the opportunity to visit the historic monasteries and chapels on the Solovetsky Islands, which later became the site of the first Soviet gulag. 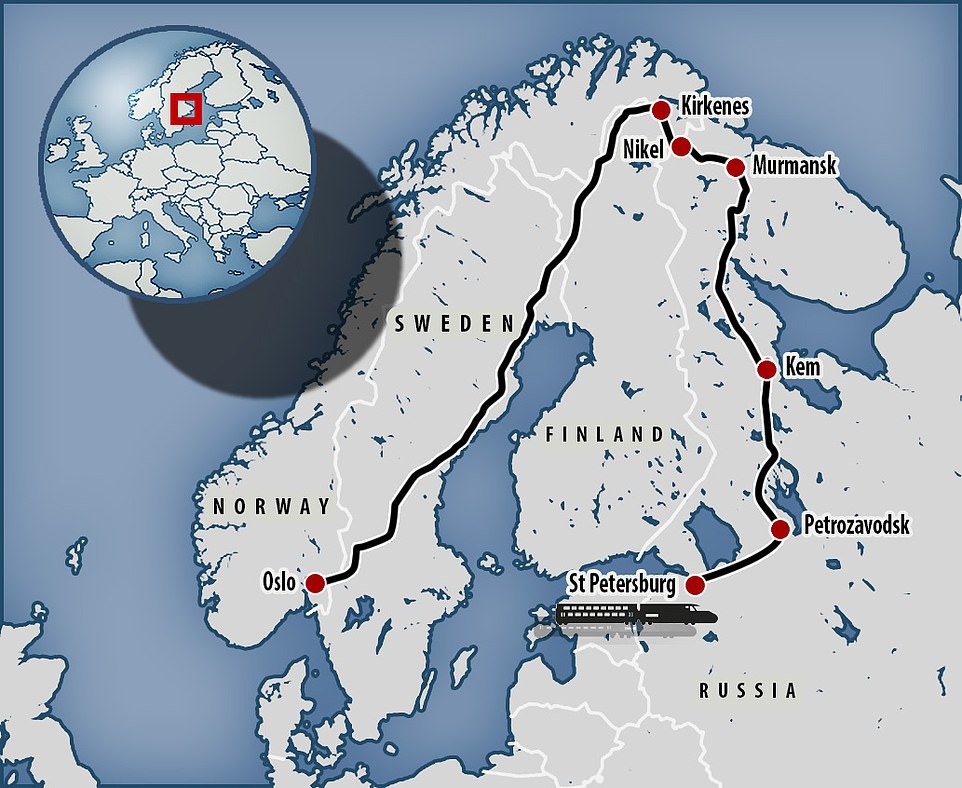 The scenic and historic route will start in St Petersburg and take passengers through Petrozavodsk, Kem, Murmansk, Nickel, Kirkenes and Oslo 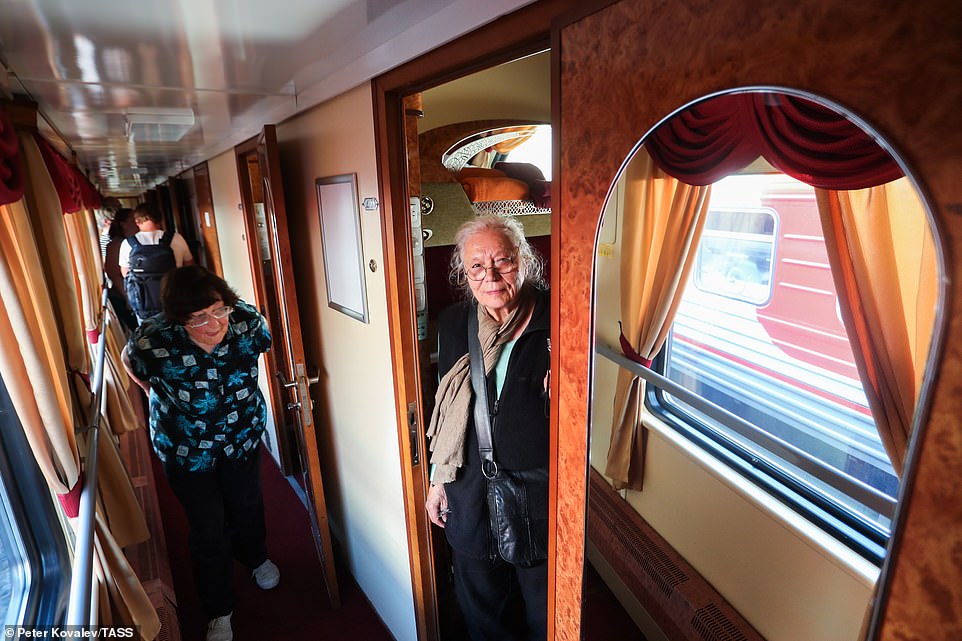 Passengers in the Zarengold train, which set off from St Petersburg yesterday and will run through the Russian cities of Petrozavodsk, Murmansk, the Norwegian city of Kirkenes, heading to Oslo 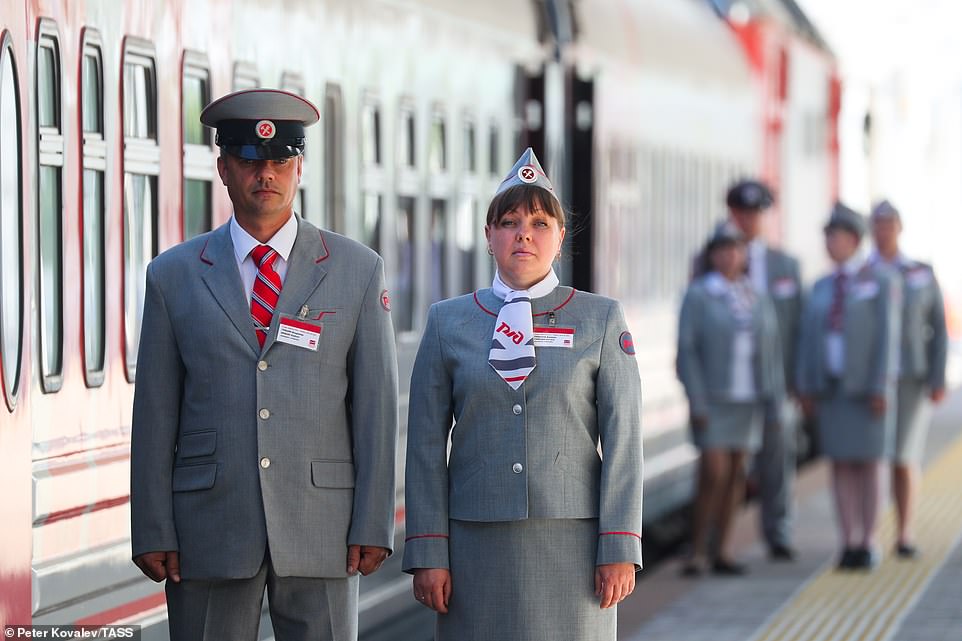 Passenger car attendants seen by the Zarengold train before it departed for its ‘trial journey’ from Saint Petersburg on Wednesday. Nurlan Mukash, executive director of the German Lernidee Erlebnisreisen – the tour group behind the project, said he hopes the train will eventually run regularly 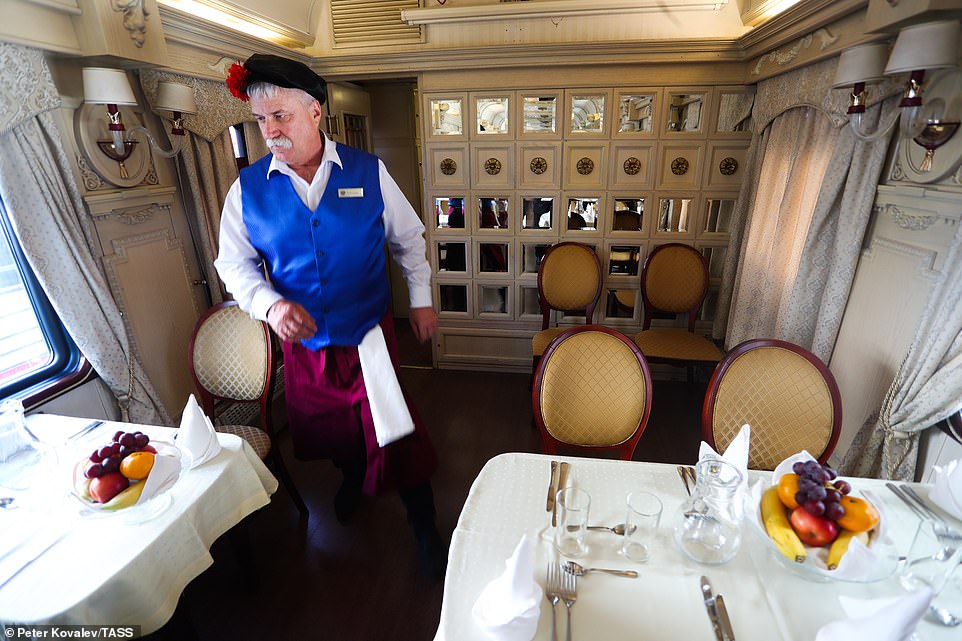 The third stop will be in the city of Murmansk, by far the largest city north of the Arctic Circle. The last destination in Russia will be the village of Nikel in the Murmansk region, before the group cross the border into Norway.

In Kirkenes, some of the guests will transfer to cruise ships and continue their journey through Norway, some will fly to Svalbard in the Arctic, and others will continue on to Oslo.

The whole trip will take 11 days and allow passengers to discover areas difficult to access by other means, according to the organisers.

The 91 tourists aboard for the inaugural trial journey came from seven countries including the US, Germany, Norway and Russia.

‘In future we hope to run trains regularly,’said Mukash, adding that the Zarengold was expected to run twice next year and four times in 2021. 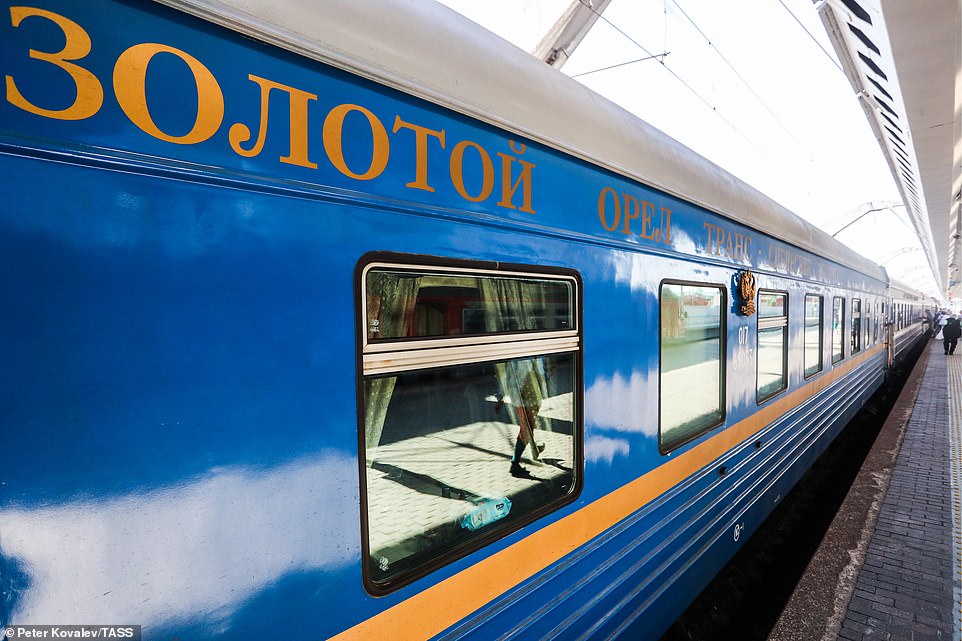 The train is set to be on tour for 11 days, during which time organisers say passengers will be able to discover areas difficult to access by other means 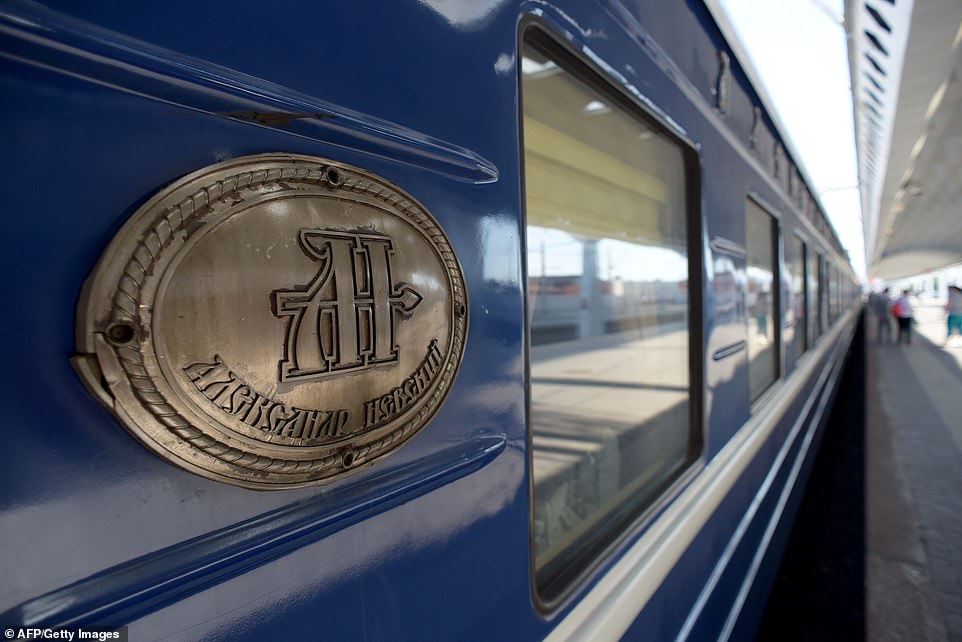 A close-up view of one of the luxury Zarengold train’s cars, before it began its inaugrual journey to Norway yesterday, passing through Petrozavodsk, the historic town of Kem and Murmansk 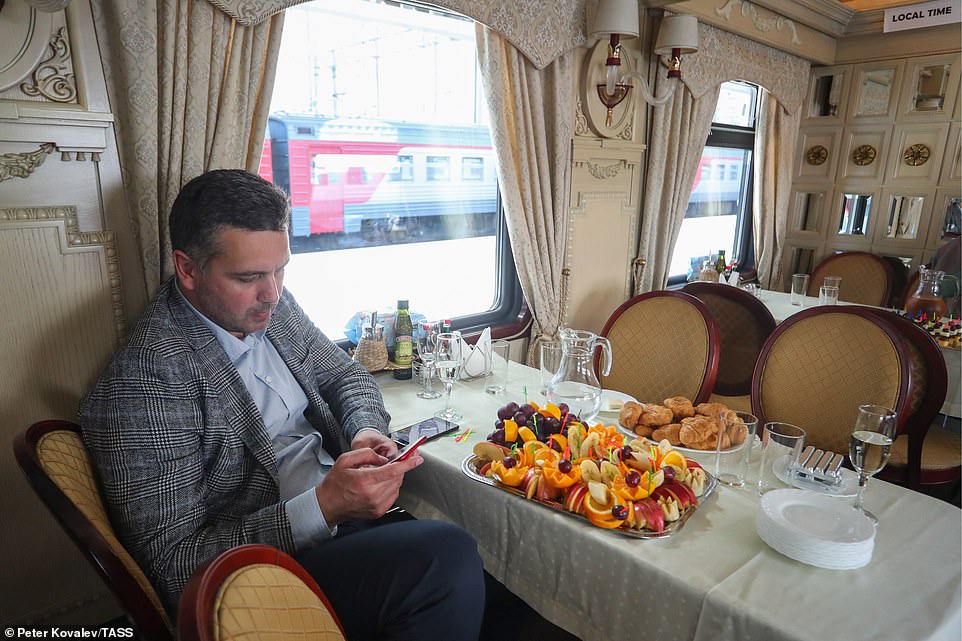 A passenger in a dining car in the Zarengold train running through the Arctic regions of Russia to Norway for the first time. It will run twice next year and four times in 2021, organisers said 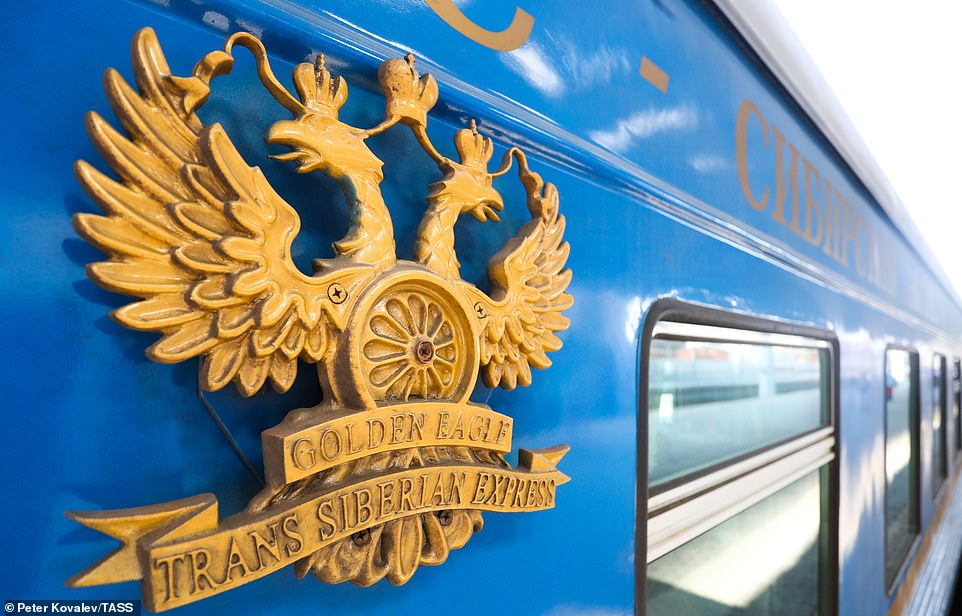 The Imperial Russian coat of arms on the Zarengold train. At Murmansk, the tourists will get off the train and continue by bus to Kirkenes in Norway before ending their journey with a boat trip to Oslo or by air to the island of Spitsbergen