Teenager died 15 years after his father shook him as a baby but killer will not face a murder charge having served eight years for GBH, inquest told 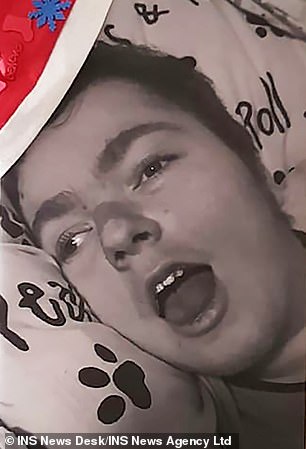 A teenager who died from a chest infection 15 years after his father shook him as a baby was unlawfully killed, a coroner ruled today.

Liam Murphy, of Andover, Hampshire, suffered seizures, pneumonia and chest infections during his life and had to be fed by a tube attached to his stomach.

His father Baron Murphy was convicted in November 2002 of causing grievous bodily harm and jailed for a total of 12 years, of which he served eight years.

Liam died in July 2017 and the level of abuse saw the Crown Prosecution Service consider whether they should charge the father with murder – although they eventually decided against this.

Now, Mid-Hampshire coroner Grahame Short has ruled Liam’s death was unlawful killing because of the lifelong injuries inflicted by his father when he was a baby.

Liam was born as a healthy baby three weeks prematurely on August 4, 2001 to his parents Shona Shering and Murphy. But doctors grew suspicious when he was taken to hospital twice in the three months following his birth.

On October 18 2001, Murphy took Liam to the Royal Hampshire County Hospital in Winchester and said he had stopped breathing while being fed at their home. 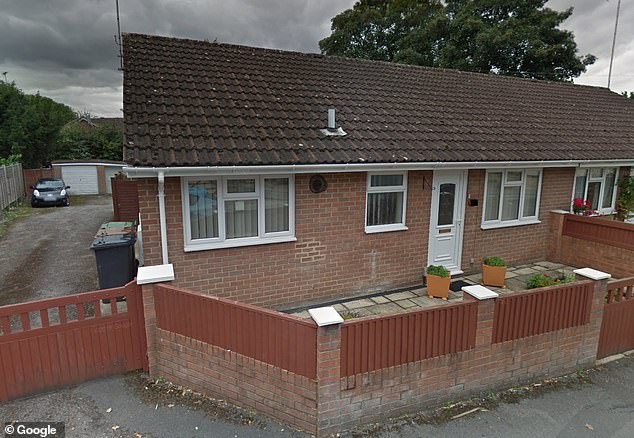 Liam’s father took him to hospital and claimed he had stopped breathing while being fed at their home (pictured) in Andover, Hampshire

Detective Sergeant Giulio Pizzo said police had arrested and charged both of little Liam’s parents after medical scans were carried out on him.

Mr Pizzo said: ‘The subsequent investigation showed the injuries typical of non-accidental injuries or, more typically, baby shaking – bleeding on the brain, retinal haemorrhaging and fractures to the ribs.’

At a trial at Winchester Crown Court in November 2002, Murphy was convicted of causing grievous bodily harm and jailed for a total of 12 years. Shering was given a two-year community rehabilitation order after being convicted of neglect.

Mr Pizzo added: ‘She should have known, or ought to have known, the risks that Baron presented in looking after Liam.’

Liam was raised by his maternal grandmother following his parents’ convictions but the injuries he sustained from his father’s abuse shortened his life.

Home Office pathologist Dr Basil Purdue told the inquest how Liam, who weighed just 48 kilos and was 4ft 3ins tall, had developed cerebral palsy, scoliosis and epilepsy as a result of the damage to his body at such a young age.

Dr Purdue told the inquest that Liam suffered from seizures, pneumonia and chest infections throughout his life and had to be fed by a tube attached to his stomach.

His lungs were scarred from infections he had developed when food had gone into the wrong hole and entered his lung, the pathologist told the inquest in Winchester.

Sharing the results of the post mortem examination, Dr Purdue said: ‘The skull was unusually thickened, the lining of the brain in a most unusual condition I have never seen before.

‘The death of Liam was clearly the result of a complication of cerebral palsy, brought on as a result of non-accidental injury which had serious consequences for every aspect of Liam’s life and severely shortened his life expectancy.

‘There is no doubt in my mind there is a clear causal link between his injuries at that very early stage in his life and his death 15 years later.’

Liam died after spending a period of time at the Naomi House Hospice in Winchester, sparking a police investigation into his death.

The inquest was delayed while the CPS considered whether to charge Murphy – now known as Baron Granger, who had been living in the community for seven years after his release – with causing the killing unlawfully under new double jeopardy laws.

Shering and her family had no desire to press the prosecution, the court heard, but the CPS could have brought the case to court once again if it was deemed to be in the public interest.

Mr Pizzo, explaining the CPS’ decision, said: ‘The outcome of that was that the CPS decided there was no case to answer, in effect, and it was largely on the grounds of public interest.

‘It was deemed that if Mr Granger were to be charged, he would not be sentenced to significantly more that he already had served. For GBH, to be sentenced for 12 years is at the upper end of the sentence and he served eight of those years.’

Despite the CPS decision not to pursue a fresh prosecution, the coroner ruled that on the evidence, Liam’s death was an unlawful killing, caused by the injuries Murphy had inflicted 15 years ago.

Mr Short, summing up, said: ‘Liam was born prematurely on August 4, 2001 and I accept from the evidence that he had no brain damage at that time.

‘What happened in the next two to three months of his life has been the subject of a criminal trial, in November 2002, the outcome of that is that his parents were convicted of offences relating to child cruelty and neglect.

‘The consequence of course for Liam, however, was that he suffered from the effects of those injuries to his brain that he had sustained in the first few months of his life.

‘Despite the treatment and care that Liam received over the years of his life, he was prone to chest infections and it was on of those that eventually led to his death.

‘I am satisfied the death was the result of the assaults on this baby. I do not believe he would have died from that cause of death were it not for the injuries he sustained. I find a clear link proved between those injuries and the ultimate cause of death.’

The coroner recorded Liam’s death was due to an unlawful killing.