Two girls, aged 13 and 15, are charged with murder ‘after they used stun gun on dad-of-three UberEats driver, 66, in carjacking attempt resulting in deadly rollover crash’

Two girls, aged 13 and 15, have been arrested on charges of felony murder in Washington DC after police say they attempted to carjack an UberEats driver, resulting in a rollover crash that killed the man.

The incident took place in the 1200 block of Van Street SE near the Nationals Park just after 4.30pm on Tuesday and was partially caught on video.

Footage captured by a neighbor and shared with NBC4 shows a dark-colored Honda Accord resting on its side against the curb, and two National Guard troops pulling a pair of teenage girls out of the overturned vehicle.

Video shows a chaotic scene in Washington DC on Tuesday, where an UberEats driver died after his Honda Accord crashed and flipped over during a carjacking attempt by two teen girls 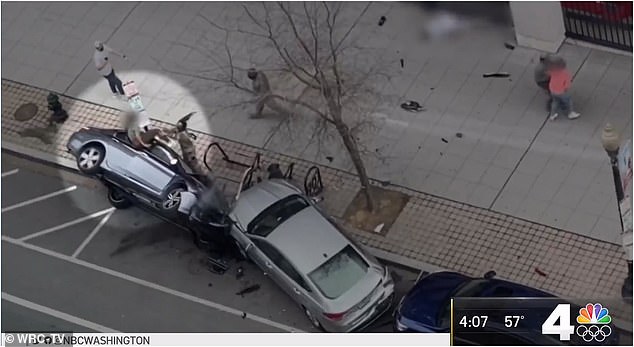 A few steps away, a man in a light-colored shirt is seen lying motionless on the sidewalk.

The victim was identified as Mohammad Anwar, 66, a father of three and a grandfather, from Springfield, Virginia. He was rushed to a hospital but could not be saved.

The Metropolitan Police Department described the suspects in the felony murder and armed carjacking as a 13-year-old girl from Southeast DC, and a 15-year-old girl from Fort Washington, Maryland. They have not been named because they are juveniles. 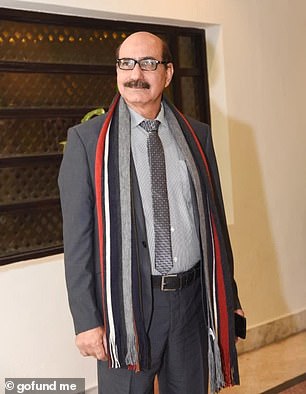 Anwar, an immigrant from Pakistna, leaves behind his wife, three grown children and four grandchildren

According to officials, Anwar was making deliveries for UberEats on Tuesday when the two teens approached his car and Tasered him in an attempt to steal the vehicle.

An eyewitness said Anwar put up a fight and the car ended up crashing and flipping on its side.

Anwar was ejected onto the sidewalk and sustained fatal injuries, including head trauma and broken bones.

Two National Guardsmen who were in the area removed the juvenile suspects from the overturned car and detained them until police responded to the scene and arrested them.

Family members said Anwar immigrated to the US from Pakistan in 2014 and worked in food delivery to provide for his wife, three adult children and four grandchildren.

‘The family is devastated by this senseless crime,’ relatives said in a statement. ‘Mohammad Anwar was a father, a grandfather, a husband, a brother, and uncle beloved by many here in the United States and in Pakistan, his birth country.’

The two suspects made their initial court appearance on Wednesday, reported WUSA9.

Prosecutors claimed that the teenage girls got into Anwar’s Honda and set the gear into drive while the victim was wedged between the driver’s seat and the door.

The car then sped down Van Street SE as Anwar was hanging from it. According to prosecutors, when the Honda struck something, the door swung back and hit Anwar.

When the car made a sharp right turn onto North Street SE, Anwar became airborne and landed on the ground before his Honda crashed into two parked cars. 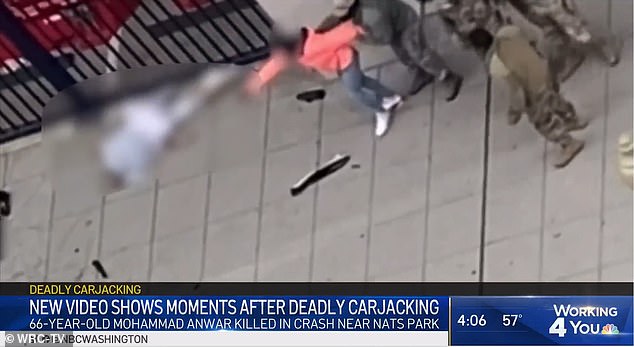 The 66-year-old man, who is seen lying motionless on the ground, suffered fatal injuries and could not be saved. One of his alleged attackers is seen being detained by troops 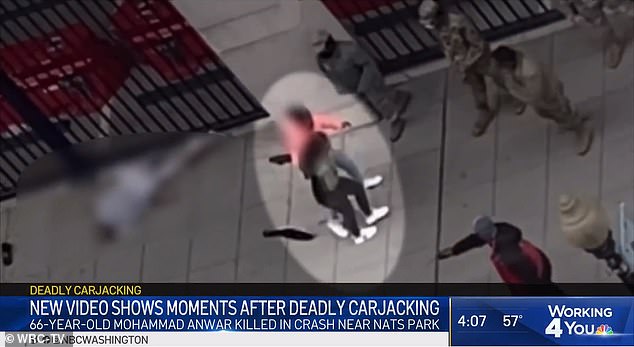 A judge concluded that the two teen girls pose a threat to the community and are a potential flight risk, and ordered them detained pending their next court appearance scheduled for March 31.

Meanwhile, the victim’s niece has launched a GoFundMe campaign to help pay for a traditional Islamic funeral for him. As of Thursday morning, more than $85,000 has been raised.

‘Words can not describe how our family is feeling currently,’ Lehra Bogino wrote in the campaign’s description. ‘Devastation, confusion, shock, anger, heartache, and anguish are just a few that come to mind. We will carry him with us always, but it doesn’t take the pain away of losing him so tragically and so unexpectedly soon.’