A West Australian teenager who sped through a COVID border checkpoint at 230 kilometres an hour after repeatedly being refused entry into the state to see his pregnant and terminally ill mother has copped a lifetime driving suspension and been fined $3000.

The 17-year-old appeared in Perth Children’s Court on Tuesday via video link from Banksia Hill Juvenile Detention Centre where he had been remanded in custody and quarantined from other detainees for the past two weeks as he was considered an ‘extreme risk traveller’. 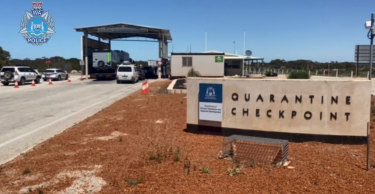 The teenager was fined $3000 and handed a lifetime driving suspension after speeding through the border checkpoint. Credit:WA Police

The teenager was living in Sydney when he had at least five G2G Pass applications rejected before he decided in November to drive from New South Wales to WA via Victoria and South Australia with his friend and co-offender Ram Jasim, 24.

The court heard that the learner driver was desperately trying to come home to Perth to see his mother who had since been diagnosed with cancer and fallen pregnant.

Once in South Australia, the teen submitted another application suggesting he had been in the COVID-free state for 14 days, and was approved entry to WA.

The pair arrived at the Eucla border checkpoint around 4.30pm on November 8 where a police officer questioned the G2G Pass after noticing the car they were in had NSW number plates.

The police officer seized the teenager’s phone on which he found photos with a location and date stamp proving the pair had recently been in Victoria and NSW, which were both classified extreme risk states at the time.

The pair were therefore considered extreme risk travellers and were turned away by the police officer who advised them they’d be arrested if they attempted to enter the state again.

The males returned two hours later at which point the teenage driver accelerated through the checkpoint at what Magistrate Alana Padmanabham described as the “extremely high speed” of 230 km/h, ignoring the 80 km/h speed limit and failing to stop for police.

Police spotted the pair driving on Eyre Highway in the early hours of the next morning when they once again sped away exceeding the speed limit and failing to stop.

Eventually, the car, which belonged to Jasim’s father, ran out of petrol and came to a stop in a ditch on the side of the road where the pair fell asleep.

They were woken about 4am on November 9 by police officers smashing the car windows before they were arrested and taken to the Kalgoorlie Police Station.

The teenager, who had a history of dangerous driving and driving without a licence, was charged with 15 offences including several counts of failing to comply, having no authority to drive, reckless driving, and giving false or misleading information.

The boy is believed to be the first child to be charged and sentenced under the WA’s emergency COVID laws.

The defence lawyer described the teenager’s actions as “dangerous and out of character” but noted it was a time when her client was “not doing so well”.

The court heard the teenager’s parents had broken up in 2020 when his father moved back to Iraq before returning to Perth again in May this year.

The boy’s lawyer said his father was the “normal disciplinary” in the family and had ordered his son to move out of the family home in Bedford. He then moved to Sydney where he got a job in construction and met Jasim.

The teen later lost the job due to only having one dose of the mandated COVID vaccine. He was due to have his second on November 18, nine days after his arrest.

Since being in custody, the teen has returned five negative COVID test results.

His lawyer urged Magistrate Padmanabham to treat the matter with compassion, saying the strict quarantine in custody hadn’t been easy for her client who had a skin condition that flared up due to stress and worries over his terminally ill mother who he was not allowed to call.

She said the teen and his family plan to move back to Iraq.

While Magistrate Padmanabham said the teen had “good reason” to do what he did, his “incredibly reckless” behaviour and driving put lives at risk and could have jeopardised the freedoms of West Australians given he had travelled from extreme risk locations.

“You’ve made your choice, and now you have to deal with the consequences,” she said.

The Magistrate was extremely compassionate and wished the 17-year-old all the best in taking care of his sick mother and returning home to Iraq.

In response, the teenager thanked her and said, “this experience has changed me a lot”.

He pleaded guilty to all charges and was put on a $3000 six-month good behaviour bond, fined $3000 and handed a lifetime suspension from driving.

Jasim, who appeared in Perth Magistrates Court on Monday via video link from the Eastern Goldfields Regional Prison did not have a criminal record and was fined $6000 and ordered to pay court costs.