Leading epidemiologists say NSW will be lucky if its new lockdown lasts only two weeks, arguing the state government waited days too long to take decisive action that could have prevented major spreading events.

In announcing the state’s biggest lockdown in more than a year, health officials revealed contact tracers had recently discovered a large number of people that had been infectious in the community for days before being discovered. 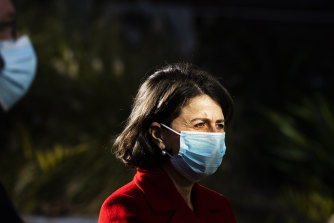 The epidemiologist and World Health Organisation adviser said a widespread lockdown should have been introduced just days into the outbreak due to the known infectiousness of the Delta strain, which is on its way to becoming the dominant strain of COVID-19 worldwide.

It emerged on Saturday that while 28 of the 29 new daily cases recorded on Saturday were linked to known cases, 17 of them weren’t in isolation during their infectious period, potentially spreading the Delta variant.

“The transmissibility is at least double [the] previous variants that we’ve seen. And unfortunately this variant is becoming the main variant,” NSW Premier Gladys Berejiklian said.

“A few days ago I said this was the scariest time that I felt since the pandemic started and that’s proven to be the case.”

Clinical epidemiologist Nancy Baxter agreed it was a mistake not to introduce a wider lockdown of Sydney earlier in the week, and added that Greater Sydney residents would be “lucky” if stay-at-home orders ended as planned on July 9.

The head of the Melbourne School of Population and Global Health said the lockdown wouldn’t be “short and sharp … it’s going to be a gradual release of lockdown”.

Joel Negin, head of the School of Public Health at the University of Sydney, said the transmissibility of the Delta variant appeared to be a “game changer”.

He said it was different to past outbreaks in Australia where it wasn’t unusual for one member of a family to test positive to the virus, and others to avoid infection.

“Now we’re seeing that all members of a family of five or multiple people at one party are becoming positive,” Professor Negin said.

“This is unscientific at this point, but the suggestion seems to be that it is spreading within clusters more rapidly, which is all the more reason for the lockdown and people staying within their family clusters and communities.”

NSW officials have been expressing growing concern about the danger posed by the Delta variant.

“The Delta variant is proving to be a very formidable foe – no matter what defensive steps we’re taking at the moment, the virus seems to understand how to counter-attack in different locations. That’s causing us a high level of concern,” NSW Health Minister Brad Hazzard said on Saturday.

Professor McLaws said that rhetoric hadn’t been matched with appropriate action and if NSW had introduced lockdown measures a week earlier the spreading event at a party in south-west Sydney on Saturday, June 19 would have never occurred.

One of the attendees of that party, a bayside dry cleaner, returned to Melbourne infected, sparking a new outbreak, which so far appears to have been contained.

Victoria reported one new local COVID-19 case on Saturday, a primary close contact of the Kings Park apartment complex in Southbank associated with an earlier outbreak, who had been in quarantine for almost two weeks.

Robert Booy, an epidemiologist at the University of Sydney, said it was easy to say Sydney should have gone into lockdown sooner but that this outbreak was different.

“NSW over and over banished small outbreaks effectively without shutdowns. This time, the virus is more severe. This time, perhaps, human behaviour was a little different. And I don’t think any of us can be soothsayers or crystal ball gazers and say ‘we must have shut down’ because every other time we didn’t need to,” Professor Booy said.

“We’re constantly learning how to do this better, and each outbreak is a little bit different. And maybe this time, the people who said we should’ve shut down five days ago [were] right, but every other time they weren’t.”

Sydney residents who are forced not to work because of the lockdown will have access to federal payments of up to $500 from the tail end of this week as Prime Minister Scott Morrison backed the NSW government’s decision to lock down the city of 5 million.

Mr Morrison praised the Berejiklian government for treating a lockdown as a last resort rather than rushing into a closure. “But at the end of the day, this is what’s necessary to stay on top of this latest outbreak,” Mr Morrison said in a video from the Lodge in Canberra, where he is in quarantine after returning from Europe.

Eligible people who work or live in the seven local government areas that faced restrictions first – the City of Sydney, Waverley, Randwick, Canada Bay, Inner West, Bayside, and Woollahra – will be able to access the federal payments from Thursday, followed by the rest of Sydney on Sunday, July 4.

Kirby Institute epidemiologist Scientia Professor John Kaldor said there had been an inaccurate narrative that NSW “doesn’t go into lockdowns” while other states did.

“NSW did start the whole pandemic with a greater public health workforce, and it has utilised that in previous outbreaks in ways that have been very effective, but that doesn’t mean that its capacity to keep up with expanding cases is infinite,” he said.

Professor Baxter said contact tracing relied on an interval of a few days between when someone was exposed to coronavirus and then developed the disease, to intervene and put them in isolation.

But she said the speed at which the Delta variant appeared to be moving made it challenging for NSW’s public health team to reach people before they become infected.

“If that [interval] has essentially gone down to a day or less … it makes intervention to protect the public very challenging, because it’s already jumped to the next person,” Professor Baxter said.

Stay across the most crucial developments related to the pandemic with the Coronavirus Update. Sign up for the weekly newsletter.