London: Furious truck drivers stranded in Britain by the French travel ban clashed with police on Wednesday, local time, as they vented their frustration at delays in being tested and getting home for Christmas.

Drivers blocked the entrance to Dover port in anger at not being allowed to cross the Channel without a negative coronavirus test. 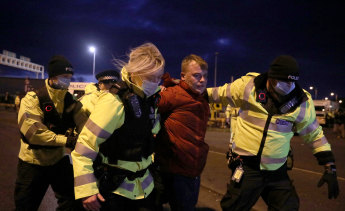 A man is detained by Police officers after a scuffle at the Port of Dover.Credit:Getty

To get that test, they had to travel nearly 36 kilometres to Manston airport – but refused to do so for fear of losing their place in the queue to get home.

A mobile testing unit was eventually brought from Manston, where some of the 3800 truckers parked at the disused airbase also clashed with police.

Three people were arrested for alleged assaults on police officers and obstruction of a highway.

Fewer than 200 tests an hour had been done by mid-afternoon on Wednesday and it was not until 6pm that police cleared a way to the port, allowing the first trucks to board ferries to France. 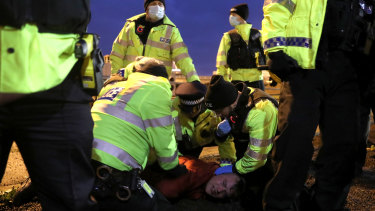 Thousands of trucks were stranded around Kent after France banned all travel from the UK on Sunday.Credit:Getty

Some 170 soldiers last night joined the 100 NHS staff to ramp up the testing from 10 mobile units at Manston and on the approaches to Dover port.

Ministers were also in talks with their counterparts in France over the possibility of cancelling the scheduled 36-hour shutdown of Channel ports from today to Boxing Day morning.

Both governments are understood to be in favour of operating through the Christmas period if needed to clear the backlog, but there was no final agreement last night.

Asked last night if the backlog chaos could be cleared by new year, Grant Shapps, the Transport Secretary, admitted: "We don't know how long it will take to resolve, [I am] very hopeful it will be done before the new year."

Shapps repeated his call for people to stay away from Dover and added: "I want to apologise to people in Kent. There will be a lot of disruption being created and caused by the French closing their border."

Natalie Elphicke, Dover's Conservative MP, warned that it would take at least three to five days to test and clear all the truckers and their trucks. "For me it underlines the irresponsibility of this action by the French," she said.

Andrew Opie, director of food and sustainability at the British Retail Consortium, said: "Until the backlog is cleared and supply chains return to normal, we anticipate issues with the availability of some fresh goods."

German airline Lufthansa today flew in 80 tonnes of fresh fruit and vegetables into the UK for major supermarkets.

Up to 8000 trucks are thought to be stacked in Kent with at least another 2000 outside the county.

The French lifted their travel ban on Tuesday but only for those with negative Covid tests from up to 72 hours before departure.