The organisation was accused of putting the safety of female rugby players second to the ‘feelings’ of transitioned athletes with its demands against World Rugby.

Some LGBTIQ+ sports groups added their voices to the calls, saying banning transgender women was ‘exclusionary’ and would impact vulnerable people.

On social media some users criticised the LGBT+ charity, saying its stance was making the game more dangerous.

World Rugby is considering a ban on allowing transgender athletes to play women’s contact rugby due to concerns about increased risks of injury, which they say comes from independent research. 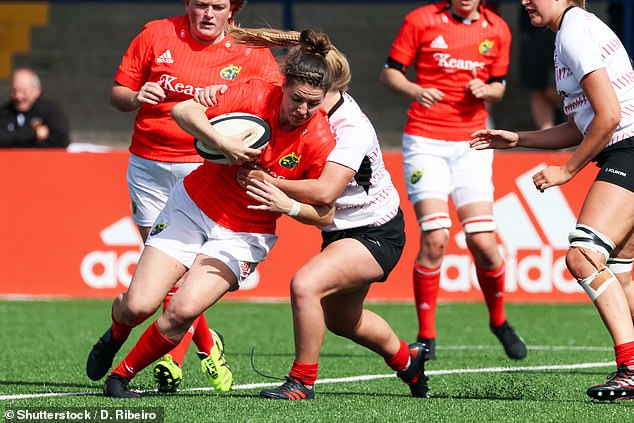 The report says there could be ‘at least a 20-30 per cent risk’ of injury when a female player is tackled by a player who has gone through male puberty, as reported by the BBC.

Currently trans women can play women’s rugby if they lower their testosterone levels for at least 12 months in line with Olympic guidelines. But the working group looking at the rule change in July said this was not ‘fit for purpose’.

The stance from Stonewall prompted some angry outbursts on Twitter accusing them of endangering cisgender women.

But a sports injury specialist at the University of Bath said the ban on men who identify as women enacts a ‘particular structural violence against trans women’.

A user called God Zilla said: ‘I knew a guy whose 6’6 rugby player brother crashed into another guy and broke his leg in five places. The cracking of the bones was loud enough to be heard by all the players. Imagine if he had crashed into a woman. Now imagine cheering for this. This is you, Stonewall UK.’ 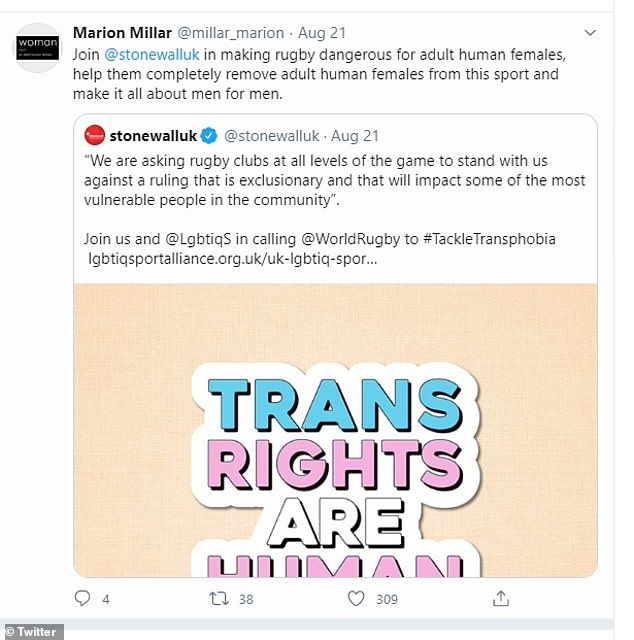 And an unnamed former rugby player from Hampshire tweeted: ‘I am a 6ft 2in former forward. If I announce I identify as a girl, Stonewall says it’s OK for me to smash full tilt into a female fly half who weighs four or five stone less than me.

‘When she has a life changing spinal injury because of it, that’s fine, because no one’s feelings got hurt.’

The LGBTIQ+ Sport and Physical Activity Alliance is calling on UK rugby clubs to stand with it to oppose the new proposals from World Rugby.

Michelle Daltry, from LGBT+ Sport Cymru, said: ‘We are asking rugby clubs at all levels of the game to stand with us against a ruling that is exclusionary and that will impact some of the most vulnerable people in the community.’

The Alliance claims that the plans draw upon research that is non-athlete and non-rugby specific and which uses inaccurate modelling to reach its conclusions.

The organisation has also accused World Rugby of presenting ‘no evidence of physical performance and ability to play safely of trans women’.

The Alliance added that the body takes ‘no account of the current situation of transgender rugby players providing no baseline or impact assessment’.

The Alliance also quoted Dr Sheree Bekker, a sports injury specialist from the University of Bath, who said: ‘Any exclusionary policy in women’s sport hurts all women.

‘This policy approach enacts a particular structural violence against trans women. Pitting safety against fairness is a false dichotomy.’

‘If size discrepancy is the main safety concern. then we must ask why a blanket ban is the best approach.

‘As an injury prevention researcher, we know that preventing injury is more about skill/technique training and conditioning than anything else.’