Barcelona: Spanish officials said on Wednesday that police arrested 21 people with links to the Catalan separatist movement on suspicion of corruption and promoting public disorder.

Spain’s Interior Ministry said in a statement that the arrests took place during 31 police raids in the Catalonia region cities of Barcelona and Girona. 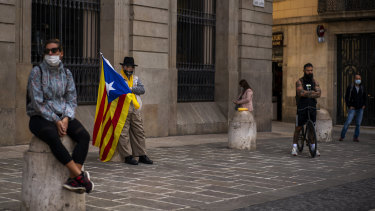 A man holding an “estelada” or independence flag waits for a protest to condemn a police raid on Catalan separatists in Barcelona, Spain.Credit:AP

The ministry said the arrested individuals were being investigated for alleged embezzlement, prevarication and money laundering. Investigations revealed that money intended for Barcelona's provincial government and a regional entity for promoting sports teams had been diverted illegally, the ministry said.

A Barcelona court named David Madi and Oriol Vendrell, two former politicians for Catalan separatist parties, as being among the people investigation. It said those investigated were also suspected of promoting public disorder.

Catalonia was rocked last year by a series of violent protests that left hundreds of protestors and police officers injured following in imprisonment of the top leaders of a failed 2017 secession attempt in the wealthy northeast region.

The independence movement is supported by roughly half the population of Catalonia but rejected by the other half and across Spain as a whole.