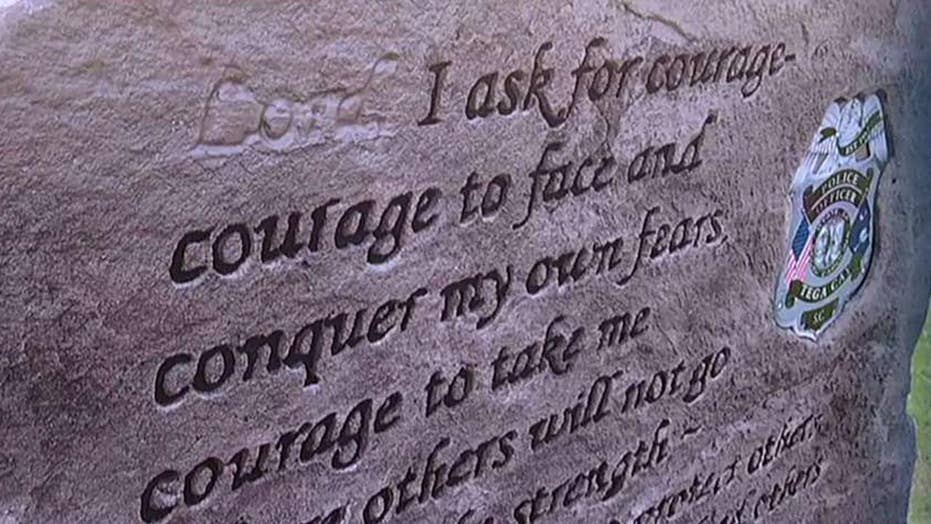 SC to restore ‘Lord’ on fallen officers’ memorial after backlash

Todd Starnes applauds the Tega Cay community and Fox News viewers and listeners for taking a stand against city leaders who removed the word ‘Lord’ from a monument to honor fallen police officers.

Officials said the return of the memorial, which honors fallen officers and was on the grounds of the police department, was a "compromise."

The city initially scrubbed off three references to "Lord" after a resident complained but then removed the monument entirely after they faced a huge backlash over the edit. The memorial was created by the police department and donated by a women's civic group.

But the city's so-called "compromise" is upsetting residents once again for omitting a key part of the original version.

The monument will still have the prayer, with the references to the Lord included, but the Bible verse will be removed.

WELL-KNOWN CHRISTIAN AUTHOR, PURITY ADVOCATE, RENOUNCES HIS FAITH: ‘I HOPE YOU CAN FORGIVE ME’

"After careful consideration and much conversation with people on both sides of the discussion, City Council has made the decision that the Police Officer's Prayer will be restored to its original condition and returned to the Fallen Officers’ Memorial located at the new police station," the city wrote on its Facebook page.

It all started after Dann Dunn, a resident, complained at a July 15 city council meeting about the religious reference on public property, according to The (Rock Hill) Herald. 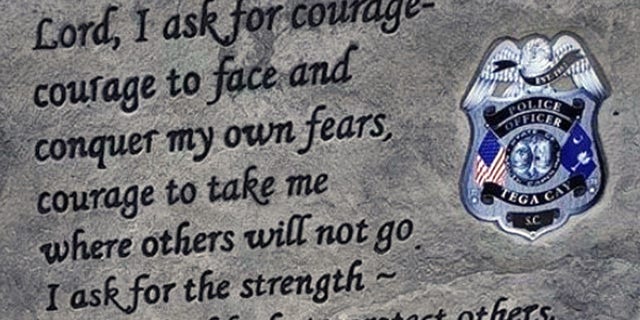 “Public grounds and public services should remain secular and neutral for all members of the community — all members — so they should feel welcome here,” Dunn said at the time.

On the front of the stone monument, at the bottom corner, was Matthew 5:9, a reference to Jesus' words in the New Testament: "Blessed are the peacemakers, for they will be called children of God." On the back, there was a prayer similar to the one used on other police officer memorials around the country.

CHICK-FIL-A EMPLOYEE PRAYS FOR CUSTOMER AFTER ‘SPIRIT LED HIM’

“Lord, I ask for courage. Courage to face and conquer my own fears, courage to take me where others will not go…Give me Lord, concern for others who trust me and compassion for those who need me. And please Lord, through it all, be at my side," the prayer said.

City officials said they reached a compromise on a monument that had "divided" the community.

"By restoring the Police Officer's Prayer on the back and not restoring the reference to the Bible Verse on the front of the monument, we can begin to understand what it means to compromise even when we completely disagree," the city wrote on Facebook.

But the decision to omit the prayer upset many residents who insisted it wasn't restoring the monument to what the police department wanted from the start.

"That memorial was desecrated by city leaders," Fox News Radio host Todd Starnes told "Fox & Friends" Monday morning. "There is a war to eradicate American culture and it starts with the war on religious liberty."

"Let's be honest here," the host of the "Todd Starnes Show," said. "The only reason they did it is because people got outraged and they called city hall and they demanded they do something."