He doesn’t know his tannins from his tantra: Son of Italian duke slams Sting for claiming singer was TRICKED into purchasing his father’s Tuscan vineyard when offered a wine from a different region

He doesn’t have to put on the red light, but Sting ought to tone down his criticisms of a Tuscan vineyard he says he was tricked into buying.

That’s the message from the son of Duke Simone Vincenzo Velluti Zati di San Clemente, who says the legendary musician owes his family an apology for his ‘false, poisonous slander’ regarding the sale of the sprawling 865-acre property.

Earlier this month, the former Police singer recounted his purchase an eighteenth-century vineyard and estate in Il Palagio, Italy, in 1999.

During an interview with Italian publication Corriere della Sera, Sting said he and his wife made numerous trips to the property as they mulled buying it. The decisive factor, he said, was a delightful glass of Chianti.

‘[The Duke] offered us a glass of red from a carafe during one of our early visits to Il Palagio,’ Sting recently told the publication. ‘We were negotiating the purchase. We liked the property a lot, even though it was in ruins. The duke asked me if I wanted to taste the wine produced by the estate and I said yes. It was an excellent wine and that convinced me to buy the vineyards as well.’ 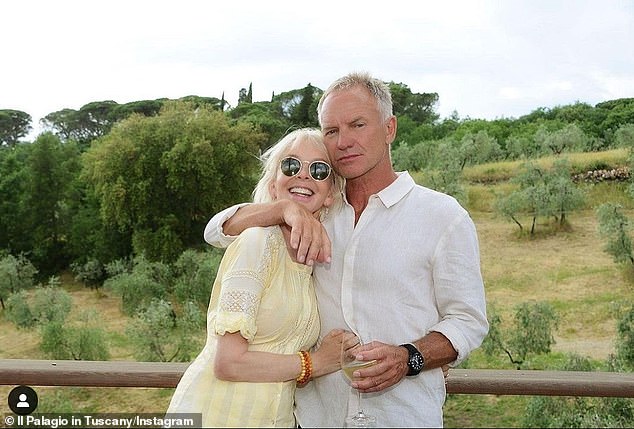 Sting and wife, Trudie Styler, say they were misled into purchasing a sprawling Tuscan estate 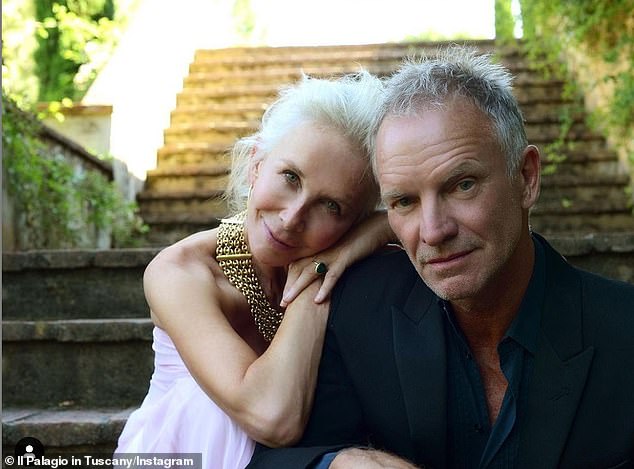 The trouble, Sting claimed, was that the wine did not hail from the property. Instead, he said he later learned the beverage he was served was a Barolo, an imposter from another region.

‘When we served the wine from the estate to our guests, I saw that someone was emptying their glass into a flowerbed…’ Sting said. ‘It was then that we decided to avenge ourselves and to show that it was possible to produce excellent wine from the vineyards at Palagio. Our whole Tuscan adventure has really been a way of getting our own back.’

His claims have left San Clemente Jr. seeing a merlot shade of red.

He said Sting’s allegations have damaged his father’s memory, as well as the family’s reputation.

‘Apart from the fact that an internationally experienced gentleman like Sting (he was 46 years old at the time) should not confuse Barolo with Chianti, Nebbiolo with Sangiovese, nothing could be more alien to my father’s character, habits, behavior, in one word, to his spirit, than to behave like a swindling innkeeper,’ San Clemente Jr. said in an online statement.

‘Even a child can tell the difference between a Barolo and a Sangiovese. And, no Tuscan — Simone least of all — would dare attempt such a cheap and absurd trick.’ 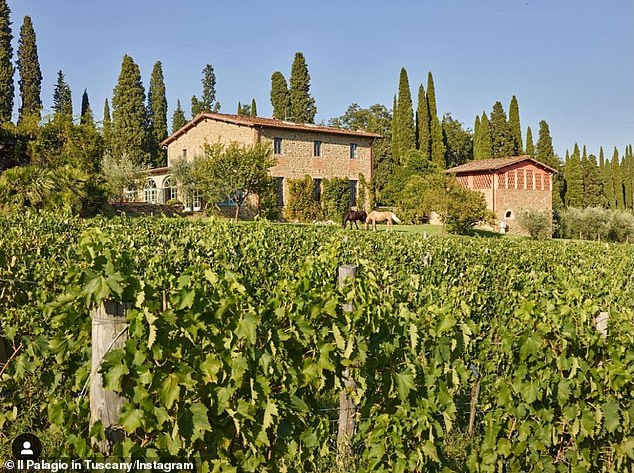 When the couple bought the villa, it was in a state of disrepair and has since been ‘beautifully and meticulously restored,’ the pair said

The renovations aren’t to everyone’s taste, with Duke’s son saying it resembles ‘a Palm Beach property than a Tuscan Fattoria’

Since acquiring the estate, Sting and his wife, Trudie Styler, have since opened a wine bar and organic pizzeria on the property, where about 150,000 bottles of wine are produced annually.

Claims that the English singer transformed the property from a state of squalor to a successful tourism destination have left a sour taste in San Clemente Jr.’s mouth.

‘It is evident that Sting is also completely unaware of the ‘true’ history’ of the Palagio. Not only has he made the comical claim [of bringing] electricity to this unique Tuscan fattoria, but he also implies that he brought ‘civilisation’ as well,’ the duke’s son said.

‘There is no excuse for Sting’s back-handed comments, defiling the memory and legacy of the previous owner. Instead, this Tuscan adoptee – like so many of his Chiantishire compatriots who neglect to learn Italian – choses to present himself as a “savior” of the Tuscan countryside.’ 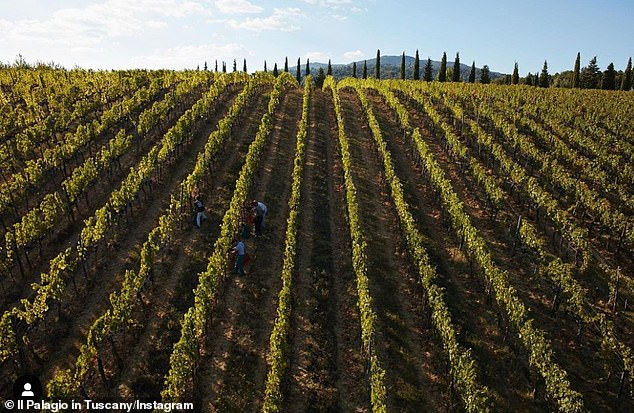 Sting and Styler, have opened a wine bar and organic pizzeria on the property, where about 150,000 bottles of wine are produced annually 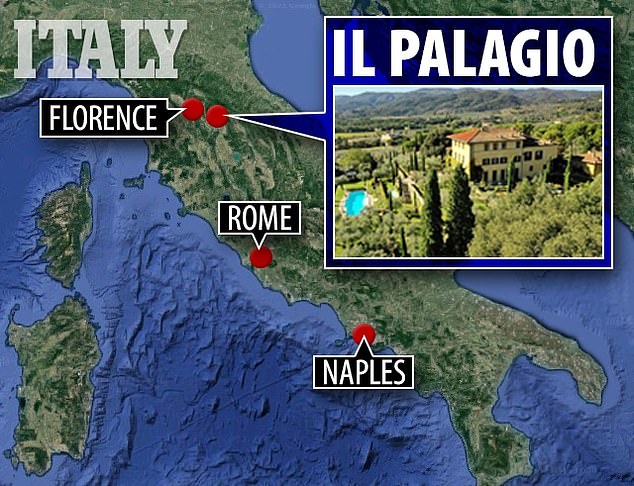 Sting’s vineyard is in Tuscany, in the Italian province of Florence, north of Rome

The property dates back to the late 1700s, when it was purchased by the Martelli family, who in 1819 sold to it to Countess Carlotta Barbolani of Montauto, widow of the Duke of San Clemente. It remained with the family until 1999, when it was acquired by Sting and his wife.

Described on its website as ‘beautifully and meticulously restored,’ Sting’s villa sits atop a lengthy driveway, offering a panoramic view of hills, olive groves, forests, and vineyards.

San Clemente Jr. scoffed at the renovations sting made to the centuries-old estate, which today includes yoga and recording studios, outdoor movie screenings, meditation gardens, a tennis court, and more.

‘According to Sting’s recollection, he found the Palagio abandoned and dying,’ San Clemente Jr. said.

‘Now, with his golden touch, he says it is finally a ‘model estate.’ Ironically, today’s Palagio looks more like a Palm Beach property than a Tuscan Fattoria. The small chapel is now a professional gym and yoga space … your eyes fall on a huge turquoise Las Vegas-style swimming pool.’