Hidden cameras have captured the rare scene of three snow leopards roaming freely in the wild 12,460 feet above sea level in China.

The wild animals were spotted sniffing around and digging holes on the snow-covered ground in north-western China’s Qinghai Province. 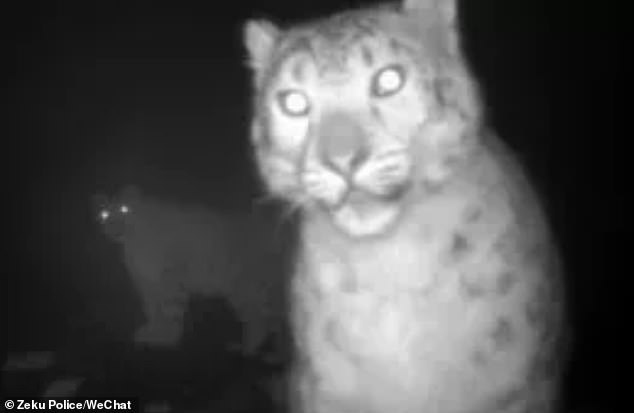 Hidden cameras have captured the rare scene of three snow leopards roaming freely in the wild 12,460 feet above sea level in the county of Zeku, Qinghai Province of north-west China 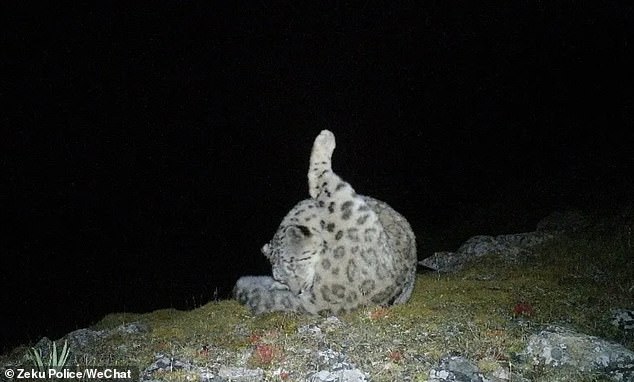 The three wild animals were spotted by the hidden infrared cameras sniffing around and digging holes on the ground in Zeku county, north-western China’s Qinghai Province

Scientists estimated there may only be between 3,920 and 6,390 snow leopards left in the wild around the world. China is thought to be home to more than half of them.

Mainly found in the high, rugged mountains of Central Asia, the specie is a Class A protected animal in China and recognised as vulnerable by the International Union for Conservation of Nature.

The wild animals were recently spotted in the wild over 3,800 metres (12,467 feet) above the sea level in the county of Zeku, Qinghai Province.

In July 2019, Zeku authorities received a report from a villager who spotted ‘a big cat resembling a snow leopard’ on a local mountain, according to a post by the police on Thursday. 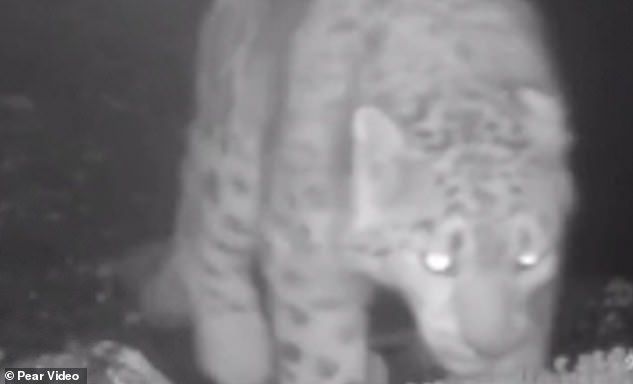 After collecting the devices and looking through the footage one year later, the Chinese authorities spotted three snow leopards walking around and making marks on the ground

The officers set up five infrared cameras around the area in a bid to track any activities of the animals.

After collecting the devices one year later, they spotted three snow leopards walking around and making marks on the ground in the footage.

The police said they also found flocks of Chinese blue sheep, about over 100 of them, which would act as a food source and help the local snow leopards to survive.

The latest sighting of snow leopards suggested the local policies to protect wildlife and the ecosystem had been efficient, according to the authorities, citing an unnamed expert. 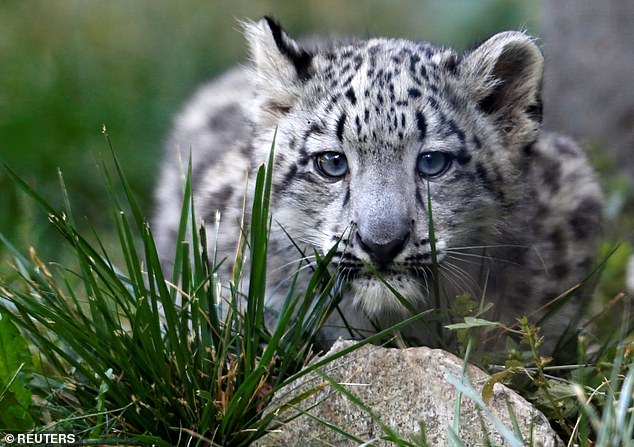 In this file photo, a three-month-old snow leopard is seen at a zoo in the US. Scientists estimated there may only be between 3,920 and 6,390 snow leopards left in the wild

‘The appearance of the snow leopards makes us, as forest police officers, feel that we have a great responsibility on our shoulders,’ the post read.

‘At the same time, it greatly boosted our confidence and made us realise the importance of our work.’

Another area of Qinghai also reported a sighting of snow leopards in September.

A hidden camera captured the heart-warming moment a mother snow leopard and her cub played with each other at the Beishan Forest Farm in Qinghai province, the first time the specie spotted in the area.

Local researchers said they accidentally stumbled across the footage while changing the batteries for an infrared camera installed on the site.