The huge animal is believed to have died more than 40,000 years ago. It was discovered frozen in time in the Yakutia region, Siberia.

Its brain is still fully intact thanks to the permafrost, making it the first ever fully grown Pleistocene wolf to have been found with its tissue preserved.

The wolf was found above the Arctic Circle by local man Pavel Efimov in summer 2018 near the remote  Tirekhtyakh River, but the find has only now been revealed.

Scientists say that the beast is significantly larger than today’s wolves – its head alone is half the size of a fully grown modern wolf.

The reason the wolf’s head was severed is not known, but it is unlikely to have been the trophy of an ancient hunter since early man only started to arrive in this part of northern Russia around 32,500 years ago, it is believed. 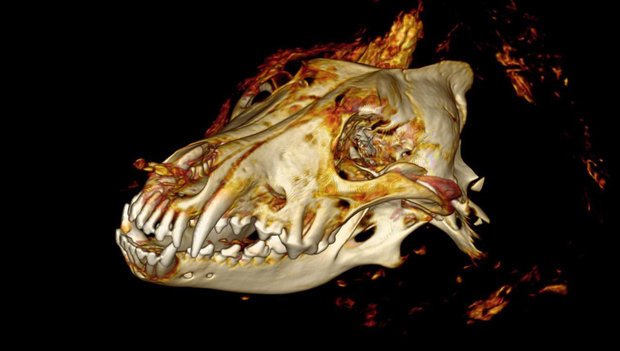 The wolf was found around the same time as a previously announced cave lion cub named Spartak, and the Ice Age remains are displayed together.

“Their muscles, organs and brains are in good condition,” said Naoki Suzuki, a professor of palaeontology and medicine with the Jikei University School of Medicine in Tokyo, who conducted CT scans of the ancient remains.

“We want to assess their physical capabilities and ecology by comparing them with the lions and wolves of today.”