The astronomical price of housing is the most serious single barrier to young people fully joining the economic life of this country and is a key driver of the cost-of-living crisis. The price of a home may be falling in some areas as a result of the Reserve Bank lifting interest rates, but the extra expense on a mortgage means home ownership remains far beyond the reach of many people trying to enter the market.

There is a range of factors that determine house prices – demographics, interest rates, the ratio of owner-occupiers to investors and the incentives built into the tax system. But if there is sufficient supply of new housing to meet demand, then, in theory, prices should stay relatively stable. When the supply and demand equation is thrown out of kilter, prices can rise or fall dramatically, as we have seen during the past decade. Demand largely outpacing supply has led to an almost doubling of prices. 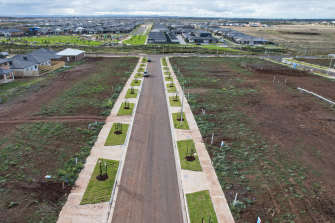 Demand has been driven, in part, by government grants of more than $20 billion in the past decade for first home buyers, on top of negative-gearing tax concessions for investors. Population growth has also played a part, as have historically low interest rates in recent years.

With so many factors pushing up demand, some argue that not enough is being done to increase the supply of housing. The chief economist at the Centre for Independent Studies, Peter Tulip, recently commented that it was clear a lack of supply in areas where people wanted to live was the leading cause of higher house prices. He has advocated that local councils get money directly from the federal government as a reward for approving more and higher-density housing.

To date most of the commentary on this issue has blamed state governments, either for not releasing enough new land, or for making the planning rules so restrictive that they delayed the release of new blocks. But a recent study by economic think tank Prosper Australia has thrown doubt on this view and revealed an unexpected constraint on housing supply.

The report looked at 10 years of land releases on the outskirts of Australia’s cities and found that despite state governments releasing large swaths of land, including on Melbourne’s city fringe at Woodlea Estate, Atherstone and Manor Lakes, big developers were banking this land then releasing it slowly to maximise their profits.

Karl Fitzgerald, the director of advocacy at Prosper Australia, said more than 110,000 approved sites had been released to developers nationally over the past decade, but only 26,000 sites, or fewer than a quarter, had been sold.

As a consequence, instead of land and housing prices falling, prices increased by an annual rate of 5.5 per cent above inflation and home buyers nationwide had forked out an extra $5.9 billion over the past 10 years, the report found.

Matthew Kandelaars, the head of the Urban Development Institute of Australia, the peak body for developers, said the industry wanted to bring land to market, He put the blame for the delays on engineering approvals for water and utility connections and the amount of red tape involved.

Wherever the truth might lie, the sluggish pace at which land is being sold and built upon has become just one more factor keeping the price of housing too high for many.

It is time for the Victorian government to take a close look at what is going on, whether it be developers manipulating the market, problems with the planning process or lack of infrastructure, or policies that allow or encourage land banking. In an environment of rising interest rates, housing affordability remains an issue for those who have given up on what was once an achievable dream for nearly every Australian.

Gay Alcorn sends a newsletter to subscribers each week. Sign up to receive her Note from the Editor.